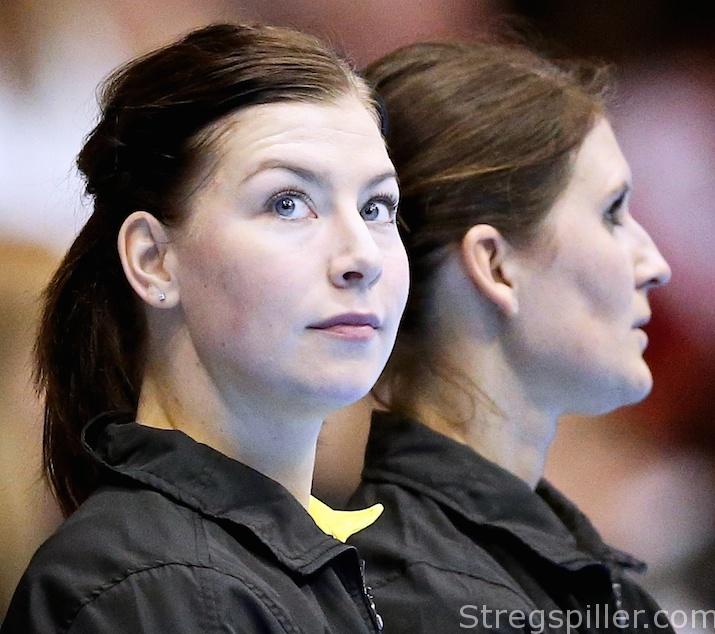 “Irrespective of gender, players only care for the right decision”

On the eve of the prestigious “Norgesmester” Cup, Norway’s two top referees, Guro Roen and Kjersti Arntsen, were looking back at an exciting and, in many ways, historic year of handball were they enjoyed a number of first time appearances.  In May they officiated the final game at the EHF Women’s Final4 in Budapest between Gyor Audit ETO and CSM Bucuresti.  Later in the summer they were nominated to lead the women’s gold medal match at the Rio Olympics between Russia and France.  Next up for Norway’s “Referees of the Year” (2014 and 2015): Organizing fair-play at Norway’s season ending competition – Norgesmester Cup – between the men of Haslum HK and Elverum HK at Oslo’s Spectrum arena.

After the women’s final in 2013 it’s the first time that you have been enlisted as referees for a senior men’s final at the Norgesmester Cup – do you prepare differently for a men’s match?

KA:  No – it’s always the same.  We have seen video of the most recent matches of the two teams and have prepared ourselves accordingly.  Normally, we officiate more men’s matches than women games in Norway.

Norgesmester Cup has a long tradition in your country.  How do you feel about having to referee such an important match right after the EHF EURO in Sweden?  Aren’t you tired of handball at this point of the year?

GR:  I remember that after the World Championship in Serbia in 2013, we were somewhat tired ahead of Norgesmester Cup.   Back then we needed some more time to regenerate.  But now, we have more experience and know how to handle the situation in a better way.  Right after EURO 2016, we pushed ourselves and officiated a men’s match in the Norwegian league to feel the level again.

KA:  This game (Norgesmester Cup ed.) is very special.  It’s the highest ranked match in Norway, it’s prestigious and it’s an honor to be selected as referee for the final.

GR:  We have to push ourselves – it’s an important battle for the two teams and we are looking forward to it as well.

When you look back at 2016, you could not possibly foresee leading a couple of major international finals (i.e. Women’s Champions League and Olympic games) but now that you have done it – how do you compare the two matches?

KA:  It’s quite difficult to rank them because the first one was played on the club level and the other one between two national teams.  Of course, the Olympics are extra special since the competition is only organized every four years.  But comparing the atmosphere between Rio and Budapest, I would say that the Final4 game was extremely intense and stands out as the toughest match that we had so far.

GR:  Yes, no doubt.  The intensity of the game cannot be compared with the Olympic final.

KA:   We spoke a lot about the Champions League final afterwards.  I remember a wave of noise coming from 11,000 Hungarian supporters during extra time, when we were signaling “passive play” for Bucuresti.  It hit me in a way that almost pushed me to the ground.  So – the two of us had to withstand that and remind ourselves that this is our court.

The situation that you just described is something that you cannot simulate or practice ahead of time.  How do you deal with it in the game?

GR:  Yes – that’s right.  At that moment we have to reinforce our mindset.  We speak a lot and encourage each other, like – “You are strong, you can withstand the pressure.”  We positively boost each other’s confidence and with more and more experience you begin to build a shell around yourself that protects you during these difficult moments in a game.  You can feel the heat but you can take it at the same time.

The Olympic final did not reach the same ferocity?

KA:  It was different.  The atmosphere in the stadium was more neutral and all the surroundings were different as well.  We warmed-up in another hall adjacent to the arena, we knew the facility very well from the five games earlier in the tournament, we knew the teams – we just knew what to expect.

GR:  Of course, it was huge game for us but we felt more relaxed and were more comfortable with the whole environment.

So, it felt more like “home”?  Games in Norway rarely reach the fevered pitch of matches that are played in Eastern Europe, for example.  Which type of match do you prefer more?

KA:  I’d say, it’s fun going to officiate games in Eastern Europe and to have this additional aspect to the game; deal with the pressure coming from the stands like in Podgorica at Moraca hall, for example.

At the Rio Olympics the new handball rules were officially put in place at a big tournament.  Now that they have been in play for some time, which one do you find most difficult to deal with?

GR:  Passive play remains the most challenging rule as it occurs most often.  First, you have to find the correct timing when you raise your arm and then you have to count the next six passes.

Who counts the passes?

KA:  The field referee counts, as we don’t have a connection to the table with the officials.

GR:  We have an agreement between the two of us that the field referee counts.

That’s the general rule?  The field referee counts the passes?

KA:  No – that’s a rule we have established for ourselves.  Other referees may do it differently.

There is no standardized process around this particular rule and how it is executed?

GR:  We also communicate clearly to the players of both teams how many more passes they have left.  That works quite well.

The seven-against-six rule has not been used as much as many have hoped or feared for, depending on who you talk to?

KA:  Yes that’s true.  It seems that on the men’s side it has been used more often even though there is less space on the court given the size of the players.

GR:  Apparently, the rule has also led to more confusion among the players of who is running back to the bench.  There are more wrong substitutions in a match now…

KA: …resulting in more work for the delegates at the official’s table.

Talking about additional responsibilities.  Technology (i.e. goal line video surveillance) has been made available and a number of prominent coaches would like to see more of it.  What is your take on the current situation?

KA:  First of all, I think our actions as referees should be predictable yet, the human factor will always be there.  But I do understand the coaches that have to deal with different personalities and their interpretation of the rules in each game.

GR:  It also depends on how you would like to see the game evolve. If we have more interruptions in a match because of the use of technology, we will lose speed – one of the most important and attractive elements in handball.

KA:  True – let’s take goal-line technology, for example.  The game should not be stopped reviewing the scene in question.  A buzzer should indicate right away that the ball was behind the line or not, and the match should not be interrupted.

GR:  A video review should certainly be used when a player was hurt intentionally.  In this case stopping the game is appropriate; it’s important to get rid of violence in the sport.  Thankfully, it does not occur that often to begin with.

KA:  But in other situations the use of technology is more tricky.  Do you want to use technology to sort out traveling violations?  It would certainly interrupt the flow of the match.  There are a number of philosophical questions that someone has to answer.  How do we want to see the game of handball developing?  Rather then using more resources to add technology to the game, we should use the money to develop more and better referees. Today, referees are volunteers they don’t do this as a fulltime job.

Do you keep track of how many games you officiated in 2016?

KA:  At EURO 2016 we were handling only four matches, but we were away for the better part of December.  And we are very lucky that we both have supportive employers.  In 2016 we were gone in August and December and often we need to take time off for preparations as well. But as we said before, it’s new challenges that keep us motivated and as long as that’s the case we will continue.

GR:  The most important objective for ourselves is to keep the level that we are at, right now.  Looking at the achievements is nice but keeping our standard and improve from there is paramount.

KA:  Aside from staying at a high performance level, we are certainly looking for new challenges in the coming years.  At the upcoming Men’s World Cup in France the Bonaventura sisters (France) get the opportunity to officiate men’s games at the highest level.  Eventually, this will create new opportunities for us as well.  We do hope for some men’s tournaments this summer – possibly on the youth or junior level.

GR:  It’s very important to face new demands.  Without such challenges you stagnate just like a player would.  Having the opportunity to take the next step in your personal development is a big part of the motivation, that’s what keeps us in the game.  Irrespective of gender, players only care for the right decision.