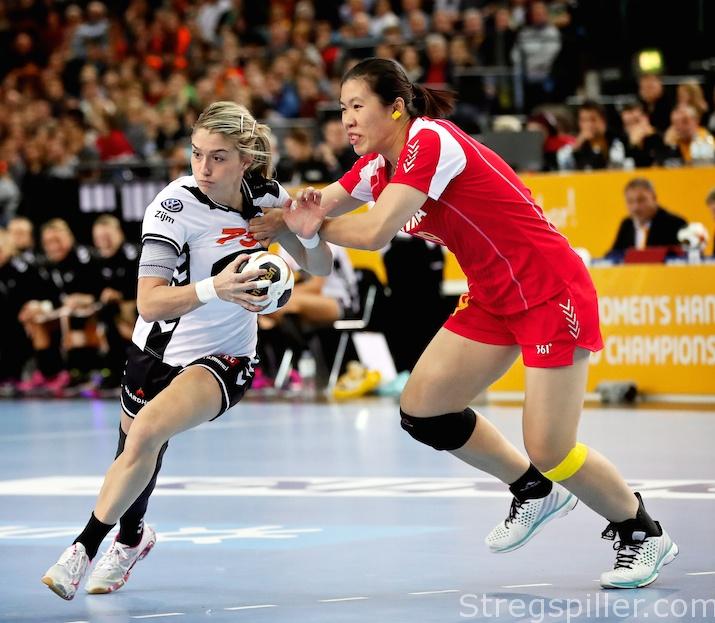 “It doesn´t matter if you play ugly, as long as you win”

INTERVIEW – The 25:21 away win against CSM Bucuresti in the Women´s Champions League on Sunday may have been Team Esbjerg’s best international achievement yet, but it was not their best game.

At least not according to Dutch star, Estavana Polman, who saw more qualities other than great handball as key reasons for the sensational victory.

Most of the pundits would probably agree that Team Esbjerg´s 25:21 road win against CSM Bucuresti this past Sunday afternoon was the Danish champions most impressive accomplishment on the international stage.

Some might even go as far as characterizing the result as the best one by a Danish team since Slagelse DT and Viborg HK were dominating the Champions League in the first decade of this millennium.

Estavana Polman tends to agree, but the Dutch star player does not think it was outstanding handball that caused the unexpected triumph.

“Of course, it was fantastic to be part of the winning team, but it wasn’t a good game. There were simply too many mistakes on both sides, but we all fought brilliantly. Everyone stepped up – we were a really strong unit and when that’s the case, we are very hard to beat.

“Our defense was excellent all the way and in goal Rikke (Poulsen, ed.) was simply outstanding,” Estavana Polman tells stregspiller.com.

Indeed Esbjerg’s defense in front of a very strong goalkeeper, Rikke Poulsen, was magnificent and CSM never found an effective solution to deal with it.

“Our 5-1 defense saw us through. It’s very difficult to play against this formation.

“You may prepare for it, but when you have to deal with it, it’s very hard to overcome. Obviously, Bucharest were not able to crack it.  This defense formation can take us far,” expects Estavana Polman.

For now, it has taken the Danish champions to the main round of the DELO EHF Champions League, including four points after Esbjerg’s wins against Rostov-Don and CSM Bucuresti.

“Of course, we are looking forward to the main round – even more so now that we take a total of four points with us.

It means that we’ll really have something to play for in our main round group,” says Polman, who will face Metz Handball, Vipers Kristiansand and FTC-Rail Cargo Hungaria after New Year.

“Given our achievements in the group phase, we do not have to fear any opponent. Yet, the quarter-final is still far away, I think.

“However, that’s what we all dream about, of course,” says the versatile backcourt player.

“Our team has matured”

It often is a challenge for any team to find the physical and mental resources to cope with the Champions League and the domestic league at the same time – especially when the competition at home is as strong as it is in Denmark.

Yet, alongside their victories in the Champions League, Team Esbjerg did succeed in all of their 12 games in the Danish league as well.

“I think our team has matured. Many of us have been with the club for quite a while now. In addition, we really have a deep squad. I think this is what carries us right now.

“We do not play well in every match, but we do win after all – as we did in our match in Romania.

“Sometimes, it’s ugly, but it doesn´t matter if you play ugly, as long as you win,” says Estavana Polman with a laughter.

Not sure about Japan

In 2019, she has to play two more games with Team Esbjerg – one Danish league match on Wednesday and the inconsequential Champions League battle against Perla Lublin.

Thereafter she will join the Dutch national team to prepare for the World Championship, which starts in Japan at the end of this month.

In recent years, fans around the globe have been accustomed to see the Netherlands among the potential medalists, although they have never reached the top of the podium.

Estavana Polman is not so sure if the upcoming championship will turn out to be as successful for her country as previous ones.

“I am not really sure where we stand this time around. We have many new and young players in our team, while some of the older players have stopped.

“I think we will have to get through the group phase, before we can begin to judge our chances,” she says.

In Japan, The Netherlands are in Group A together with Norway, Serbia, Slovenia, Angola and Cuba.

“Once we are there, we obviously will aim for a medal. After all, that’s what we are there for, but I do not dare to guarantee a medal this time,” she says.

Happy in Esbjerg, but…

In Esbjerg, she is playing in her seventh season and it’s the place where she has won the Danish championship twice, in 2016 and in 2019. But, she is still happy with her life in the town on Jutland’s west coast.

“Yes, I am very happy here. I like the club and the town – it is quiet and peaceful and I have my family here. I could hardly ask for more,” she says.

Still, Team Esbjerg cannot be certain to benefit from her talents much longer. To no surprise several of Europe’s top clubs have been eager to sign Polman for quite some time. Such efforts beg the question if she will continue to turn them down to enjoy her quiet life in Esbjerg?

“I always make contracts for one year at a time, so my current agreement is expiring at the end of this season.

“I haven’t made up my mind about my future, but I hope to do so soon,” ends Estavana Polman.