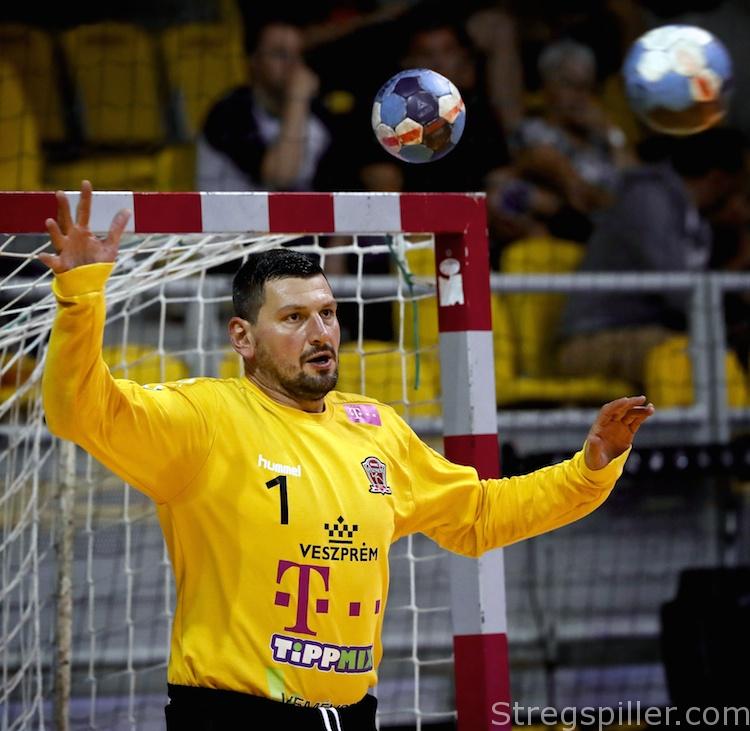 INTERVIEW – It has been 14 years since Arpad Sterbik last played in Veszprém, but it feels as if he never really left.

In this exclusive interview with stregspiller.com, he speaks about his return to Veszprém, increased competition in European club handball and the club’s chances to reach the FINAL4 in the 2018/19 VELUX EHF Champions League.

Goalkeepers are like red wine – the older they get, the better they become.  The phrase has been used so often that it became a cliché when talking about shot-stoppers.

But stereotypes do not always reflect reality and not all red wines taste “great”. Yet, in Arpad Sterbik´s case the cliché holds.

At the age of 38, the big Spaniard is as good as ever – maybe even better.

Now, Sterbik is proving his value at Telekom Veszprém HC, the club he returned to for this season after a 14 year hiatus.

Just a few days ago, he demonstrated his outstanding skills in the Hungarians Champions League home opener against Kielce – a game that Veszprém won 29:27.

”I think it was a very tough match, but we expected it. The first few games in the Champions League are usually difficult and against an opponent like Kielce in particular – they have a very strong team.

“As far as we are concerned, we aim to be the best in the Champions League and obviously we are very happy with this victory and the two points,” Arpad Sterbik tells stregspiller.com.

It’s frequently told that players do not really hear what spectators shout during a match, but Sterbik did pay attention to the ‘Arpi, Arpi,’ cheers and he admits that it touched his heart.

“It means a lot to any player when fans are supportive and it’s particularly true when it comes from Veszprém fans.  These fans really know something about handball – they can give you additional motivation and extra power in the difficult situations of the game.  They are really great and helpful,” he explains.

As mentioned, this season has marked Sterbik’s comeback in Veszprém, the club he represented between 2001 to 2004 already, in a period of time when the Hungarians reached their first Champions League final ever (2002).  And even though 14 years have passed by he doesn’t really notice any major changes in Veszprém.

“It did not really feel like coming back to a new team.

“In fact, I feel as if I never left this town, as I have spent a lot of my spare time here in Veszprém.  Actually, the only change was seeing some new faces in the locker room. Management and many of the other people around the club were all familiar,” says the veteran goalkeeper who was in no doubt when the opportunity to return to Veszprém presented itself.

“Veszprém made me an offer and I accepted it because I wanted to continue my career at the highest level in the Champions League.

“The situation in Vardar was uncertain as the sponsors appeared to be unwilling to provide the necessary financial support.  And for me it was only natural that if I would extend my career at top level somewhere, it would be in Veszprém.

“Veszprém has changed and improved just like many other clubs and national teams all over Europe.

“The main new element for me was the new arena, as I had not played here before when I was a Veszprém player,” he says.

It’s tight at the top

If there is one thing everybody is yearning for in Veszprém, it must be winning the Champions League.

The club has been close to reaching the goal several times, but so far they were unable to take that final step to the top of the podium.

Naturally, Arpad Sterbik hopes to make a contribution so that his team will travel to the 2019 FINAL4, in Cologne, once again.

The past two years, he has been there with his former club, HC Vardar, and in 2017 he even lifted the desired trophy together with his teammates.  He knows what it takes to get there.

“Nowadays many teams in the Champions League are on the same high level and our rivals get stronger and stronger; not just Veszprém.  A lot of teams are candidates to get to the FINAL4 and it’s really difficult to predict which four teams will actually make it.

“Hopefully, we are on a good path and improve during the season, so we can be one of the clubs to fight in the FINAL4,” he says.

On Saturday evening, the next stop en route to Cologne will be Barcelona, another one of Sterbik´s former clubs.   Arpad spent his time there between 2012 and 2014.

“It won’t be a new experience either as I already played there twice after my departure.

“Today only two or three players are left in Barcelona who were part of the club when I was there.  Of course, there are other familiar faces and it’s always great to play in Barcelona, against this big team.  Obviously, it’ll be a great match.

“No doubt, they will receive me with applause but after that I will be treated as an opponent just like the rest of my teammates.”

At the age of 38, in fact, he will turn 39 in less than two months, it’s a legitimate question to ask how long Sterbik plans to go on.

“I want to continue playing at this high level as long as possible because I cannot imagine myself playing at any lower stage.

“For the next two years, I will keep playing at top level and after that we will see,” says Arpad Sterbik before heading off to Barcelona with the rest of Team Veszprém.