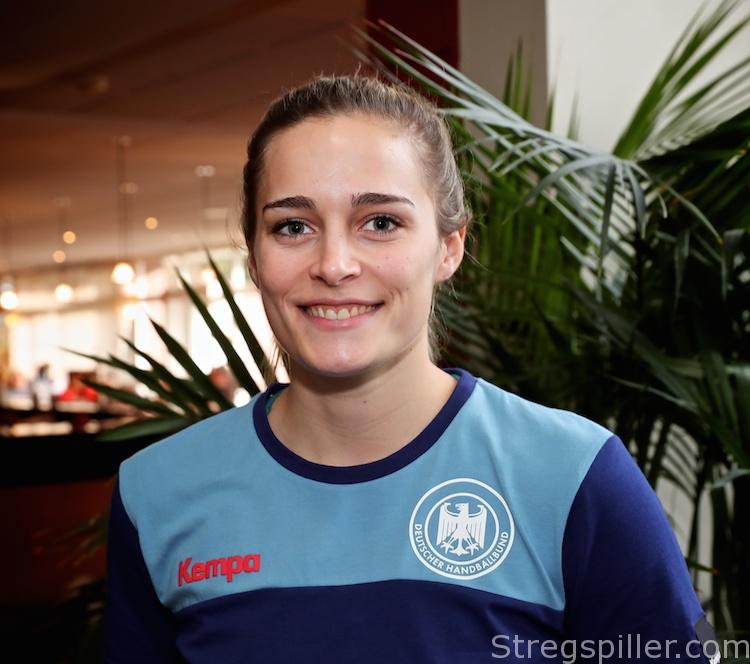 “We are determined to make this one count”

INTERVIEW – Germany’s Dinah Eckerle has not been content with her performance in goal, so far at EURO 2018.

However, she sees improvements and she hopes to take another step forward in the deciding game against the Czech Republic, on Wednesday evening, helping her team to reach the main round.

The European championship has been a bit of a roller-coaster ride for the German national team after two rounds of play.

A sensational 33:32 win against Norway, was followed by a rather  plain 29:24 loss versus Romania. The results have led to a showdown between the Czech Republic and Germany, on Wednesday evening.

One of the key players in the German effort, to reach the next stage of the European championship is Dinah Eckerle.

The 23-year-old goalkeeper from Bietigheim has not been entirely satisfied with her performance thus far in the tournament and she looks forward to step it up again the Czech Republic.

While she is not so happy with her own achievements, she still sees her team´s performance over the course of the previous two matches promising.

“My overall impression is positive.

“We got two points against Norway, which – I think – not many people were expecting and no one can take these two points away from us, anymore.

“Romania was a really strong opponent – we knew that. Unfortunately, we did not bring the same team effort against them, and now we have a final of sorts that will determine the ranking in the preliminary round.

“We are very determined to make this one count and then we will move on to the main round, including two points – for us this will be a dream scenario,” Dinah Eckerle tells stregspiller.com.

Need to be tougher

Despite the defeat, she still thinks that she and her team learned something from the match against Romania.

“Absolutely – Romania played an extremely physical game of handball and that’s something we still have to get used to and learn how to respond. Simply put – we have to play a bit “filthy” every now and then and be a bit tougher. So, that’s our take-away from this game,” she finds.

With regards to her own performance, so far, in the tournament, she is rather critical.

“I can say that I am not satisfied with what I have shown until now.

“Still, I do think that Monday’s game was a step in the right direction – I am determined and will continue to focus on the teams and the players we’ll meet and help my team this way.

“I am confident that I can step it up another notch against the Czechs,” she believes.

She also finds that the Czech shooters will suit her rather well and that’s encouraging.

“We know that Iveta Luzumova is their key player and we will have to limit her radius on the pitch quite a bit, but they have some other good shooters in their backcourt as well.

“In any event, we will have to prepare thoroughly,” expects Eckerle who looks forward to meeting Luzumova again, as the two were teammates at Thüringer HC, before Eckerle headed to Bietigheim.

“Of course, we know each other very well.

“We played in the same team for quite some time and maybe I can benefit from it. But, she knows me equally well, of course. Anyway, I am looking forward to get the opportunity to play against her again on Wednesday.

“And, I do hope that I will have the upper hand against her. Maybe we will see it when there are penalty shots, as she takes almost all of them for the Czechs,” she says.

She is in no doubt that a solid team effort will be necessary to overcome the Czech Republic.

“It will be crucial that we stand together as a team, like we did against Norway. And, that we show the same moral and team spirit, that we follow our tasks and that we play a fast paced game – just to name some of the things that we could not execute against Romania – at least not all the time.

“If we can achieve some if not all of it, we will get some easy goals that will give us the win,” is her analysis.