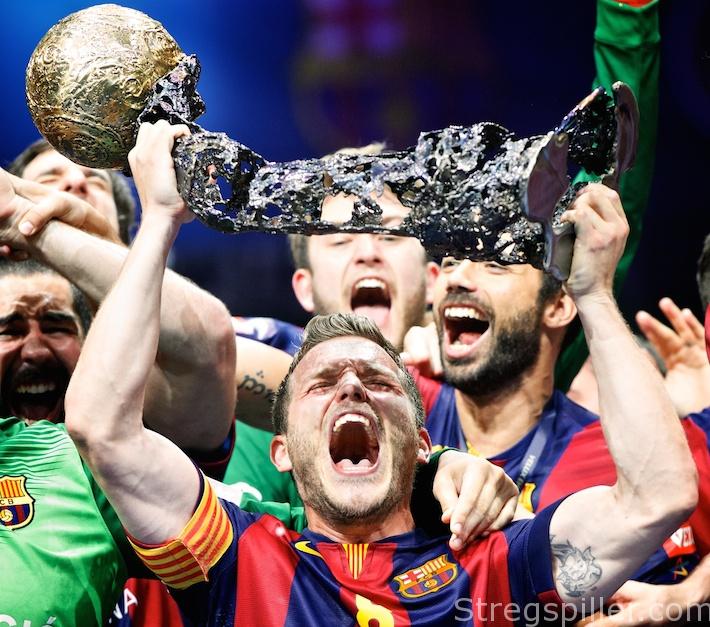 It used to be special

But these days they play against each other way too often.  Last season, they met four times and they will have played four times again in the 2016/17 Champions League edition, once all is set and done.

The encounters between the two sides used to be special and often the game turned into “one for the ages”, and that not only because of the players involved.

The two clubs met for the first time in the final of the 1999/00 season, when Kiel fielded a squad with the likes of Magnus Wislander, Nikolaj Jacobsen and Steinar Ege.  Their defense was led by Klaus-Dieter Petersen and Staffan Olsson.  Barcelona relied on the talents of legendary goalkeeper-tandem David Barrufet and Tomas Svensson – maybe the best of all time.  Inaki Urgandarin, Enric Masip and Andrei Xepkin were towering in defense.  I am still getting goosebumps, when I think of those players.

At the time, Kiel won their game at home by a score of 28:25, the Spaniards countered with a 29:24 victory to win the first Champions League title of the new millennium.   Back then, nobody knew that it would mark the start of a longtime rivalry.  THW Kiel featuring Wislander, Olsson and a young Stefan Lövgren was in its prime and looking for the European crown after dominating the German league for almost a decade.   The Catalans, on the other side, simply tried to remain the best team on the continent.

While the first meeting was a close one, the 2000/01 semi-final was of epic proportions.  Kiel, once again, won at home, this time by four (28:24), just to lose by five (28:33) at Palau Blaugrana.  Barcelona’s home turf would become one of the worst spots to play at in the years to come, for German clubs in general, and for Kiel in particular. The arena – packed with enthusiastic and often mad supporters – pushed their team over the hump again and again.

Fans had to wait some more years until the next clash, but the 2004/05 matchup in the quarter-final became an instant classic, as a single goal made the difference.  Once again the all-mighty FC Barcelona was able to celebrate. Their self-confidence was just too strong to be overshadowed by a 25:30-loss in Kiel.  Winning by six back at home (33:27) was just enough to squeeze by their rival from the German North.

Of course, Barcelona also profited from a once-in-a-lifetime generation of exceptional handball players.  The above mentioned Barrufet, Svensson, Urgandarin, Masip and Xepkin may have formed the best defense of all times. Outstanding players like Rafael Guijosa, Xavier O’Callaghan or Mateo Garralda were part of the team as well.  On the flip side of the coin, exceptional athletes such as Kiel’s Swedish contingent had to finish their careers, not winning the top prize on the club level.  Still all those games will remain a highlight of their handball life.

Unfortunately, the matches between the two teams have become such a regular part of the Champions League schedule since the end of the 2000’s that I don’t feel the same excitement as I used to.  I couldn’t witness all the games in person, but I remember that it was something special – games I was waiting for.

The last big-time match between the two sides was the 2010 final, at the first Final 4 tournament in Cologne.   Kiel stunned Barcelona with a dramatic, second-half comeback to win it all.

Maybe I’m too much of a traditionalist, but it would be nice to see such games only every once in a while.  Sure, last year’s return-leg in Barcelona was a fantastic fight, but it didn’t come anywhere close to the handball battles 15 years ago.