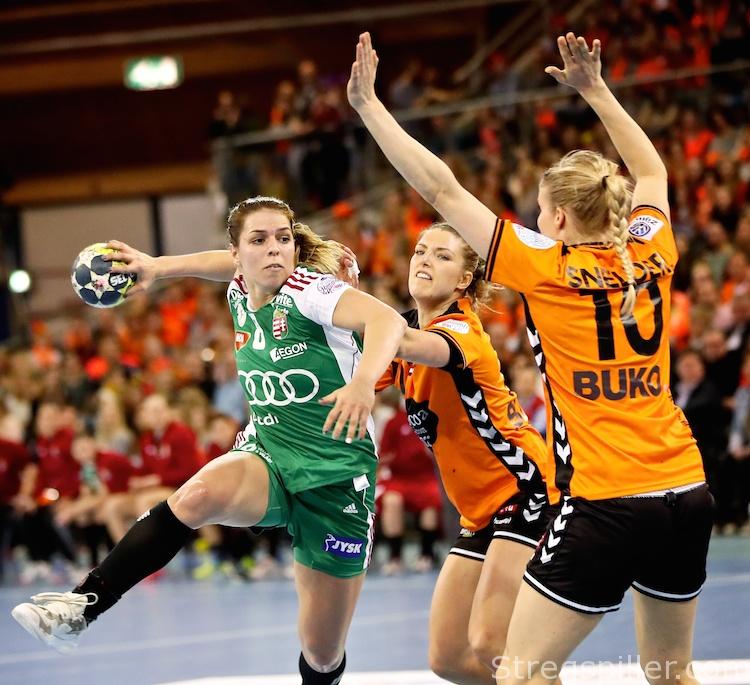 “It will be a real battle”

INTERVIEW – Anikó Kovacsis speaks to stregspiller.com about her 15 goals against Bietigheim, her decision to leave Györ and about her dream of reaching the FINAL4 with FTC.

“I did not count my goals during the game, but I felt that my shots were good and that I managed to find the necessary space.”

Actually, Anikó Kovacsics has a bit of trouble explaining her personal success in the Champions League match, this past Sunday, between FTC and Bietigheim, where she scored 15 goals, on 17 attempts.

“I did not do anything different from what I usually do. I was lucky and my teammates helped me a lot,” is the modest explanation of FTC’s playmaker.

At first sight, FTC-Rail Cargo Hungaria, appear to be not as quite strong as in previous years after the departure of several players and some injuries.

Yours truly has been among those who foresaw a more difficult season for the Hungarian vice-champion, but so far, they have proven the sceptics wrong, leading Group D, in the 2018/19 Champions League, with six points after four matches.

Following the opening defeat, on the road, versus CSM Bucuresti, FTC have booked three straight wins, and Anikó Kovacsics has no doubts when asked about the “Why”.

“We fight for each other and if one player is not playing well, another person will step up.

“Yes, we are suffering because of some injured players who, I hope, will be helping us again in the second part of the season. But right now, we manage with who we have,” says the 27-year-old Hungarian international who seems to be in the form of her life.

Hungarian national coach Kim Rasmussen, who was in attendance on Sunday, can only be pleased with what he saw from his playmaker on the national tem.

From the age of 15 until 25, she played for Hungary´s – and more recently Europe´s – most powerful club in women´s handball. Then, back in 2016, she took a remarkable decision.

In football players don’t get away with changing from Real Madrid to FC Barcelona or vice versa – not without causing certain reactions among the fans of the club they leave – and a transfer from one dominating club in women´s handball to another one, in the same country, may not go unnoticed either.

Yet, this was exactly what Kovacsics did when she traded Györ for the archrival FTC, in the summer of 2016.  And the reactions among her supporters were more positive than expected.

“Fans understood. They knew I wanted to play in the back court. And, in order to do it, I had to change the club – I am happy with my decision,” says Anikó who was mostly occupying left wing during her time in Györ.

“I am happy in my club. I like the training, the coach, the staff – everything is great. My only other hope is that we can win some trophies together in the future,” she says.

Her 15 goals against Bietigheim took her up to third place on the list of “most scoring players” in the Women´s Champions League. Sitting on 31 goals, she is trailing Anna Vyakhireva (Rostov-Don) only by one goal and three behind Cristina Neagu 9Bucuresti), FTC´s next opponent.

Obviously, she is a key player at FTC and the club’s dream of making it to the FINAL4, finally. For a FTC it must hurt to see their archrivals from Györ attending the FINAL4, in Budapest, year after year.

“Our objective is to be among the “Last Eight” teams, but our dream is the FINAL4.

“We know that some teams are better than us, but the season is long and I hope we can improve even further over the next months,” she says.

“It will be a battle”

First of all, it’ll be all about reaching the main round. FTC are almost assured of making it to the next phase of the tournament but the ticket is not in their pocket, yet. Last doubts can be removed this upcoming Sunday afternoon, when the two teams will meet at Erd Arena.

Ever since FTC’s loss in round one, a few things have happened. This past Sunday, CSM already suffered their second defeat in the 2018/19 Champions League season, against Vipers Kristiansand, when the Norwegians recorded a sensational 31:26 win in the Romanian capital.

Only sitting on three points, CSM find themselves in a situation, where they struggle to even qualify for the main round.

“It really came as a surprise to us that CSM could not beat Vipers and I am sure the Romanian team will be fighting for their life now.

“It will be a tough game, as CSM have a plenty of excellent players.

Still, we very much would like to win – it will be a real battle,” expects Anikó Kovacsics who may not score 15 goals again this Sunday, but less may do the trick as well.