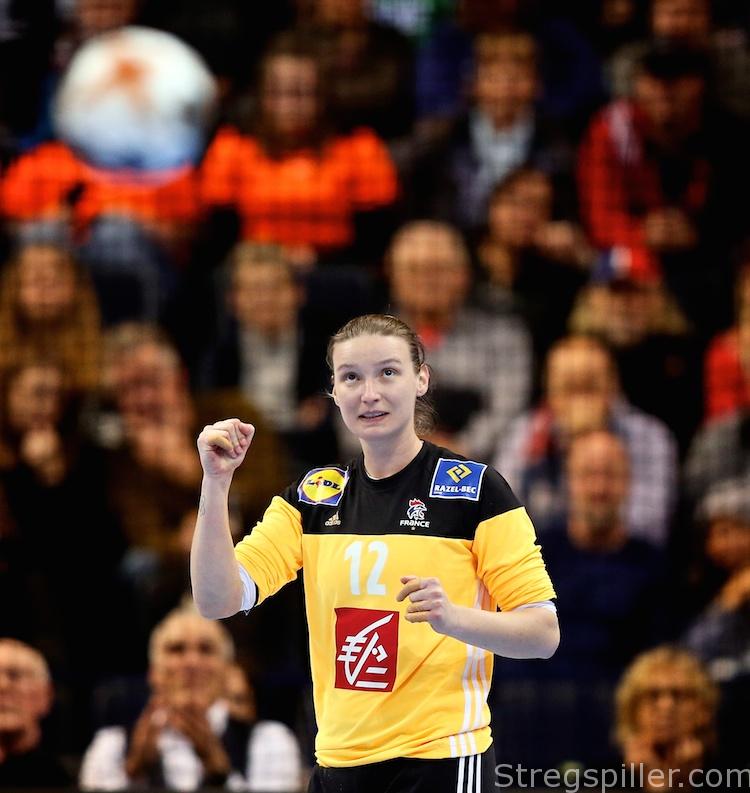 It’s all about defense

Amandine Leynaud has seen it all, mostly though hard defense battles, like the one against Sweden on Friday, in the second semifinal of World Cup’17.  It was close until the end when France were able to wear down the opposition thanks to an outstanding defense effort, the main reason why France advanced to the final, according to veteran goalkeeper, Amandine Leynaud.

Congratulations, Amandine, on reaching the final at World Cup’17.  In my opinion it was a monster performance by your defense.

AL: Yes, it’s our game, it’s our force. Before the match everyone said:  “Ah, Sweden has the best offense and we have the best defense”. We showed it tonight. We fought a lot and received a number of two minute suspensions; but we were really amazing when we were a player down. I think that’s why we won the game.

Allison Pineau just said in the press conference that the way Norway is playing is a bit scary. She also said that you will find a way to beat them.

AL: Of course, we will try to find a way – we will also take an intense look at their loss against Sweden during the group stage. Sure, if you look at their results we could say that we don’t play the game because it doesn’t make sense, anyway. But we don’t think this  way. We are in the final and anyone can win or lose such a match. Obviously they are very experienced playing finals, but if we play at our top level it will be a tough game for them.

Do you think that not feeling any pressure might be a key for you to win the final?

AL: How can you not feel pressure if you play the final of the World championship? I think you need to feel pressure, but in a positive sense – it must keep you on a high level. I will approach it like this and I hope the rest of our team will do the same. It will push us.

How “easy” is it for you to play this kind of defense?

AL: We just cooperate with each other very well and I play with an amazing defense in front of me. I understand how they move, and how they feel. I know in advance what they will do, because I know them so well. For me it makes life easier. But it requires hard work, in training, in the game – we have to talk a lot. That’s what we have to do.

So as everyone marvels about your defense, what do you have to do in offense to beat Norway?

AL: Everything! They have really good goalkeepers. We have to be extremely concentrated when it comes to shooting. and we have to play relaxed and not think about every mistake too much. I think we have a lot of good girls on the team, a lot of quality, and different quality. We just need to show it.