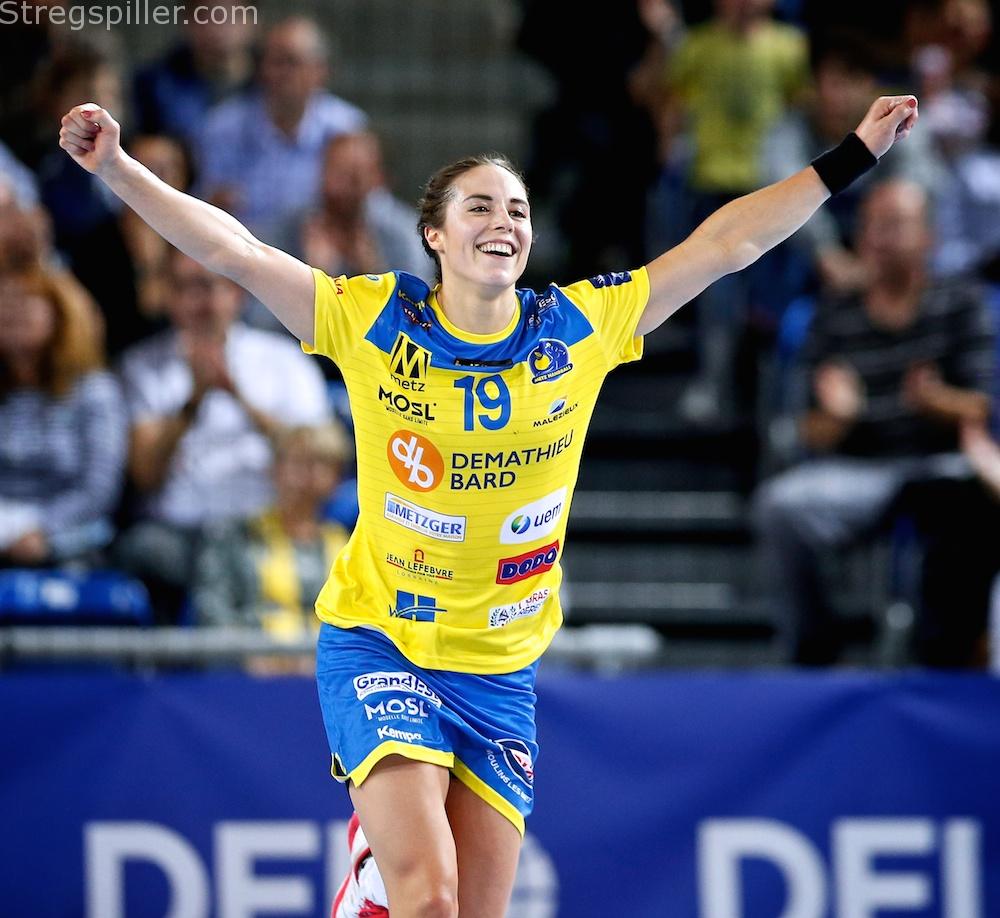 “It’s better than I could ever expect”

Louise Burgaard’s transfer from FC Midtjylland Handball to the 2019 DELO EHF Champions League semi-finalist, Metz Handball was one of the more notable transfers ahead of the 2019/20 season.  The French record champion is Burgaard’s first club outside Denmark and a new challenge in the professional career of the talented right-back.

Last night Burgaard led all scorers with 8 goals as she and her teammates defeated Podravka Vegeta (Croatia) in the opening round of the DELO EHF Champions League 40:26.  After the match Louise Burgaard summed up her experience at “Les Arenes”, in Metz.

“It was really amazing – the atmosphere here in Metz is very nice.  Even so we missed a lot of players, we stepped up, I think.  We were very well prepared, as we were expecting a difficult match.

“In our training sessions we had prepared a number of different solutions for this opponent – like playing with two line players.

“It all worked out in the end, including a fantastic result.”

In Metz everything is moving in the right direction for Louise Burgaard as she has been experiencing an excellent start in the French “Ligue Butagaz Energie” and now on Europe’s biggest stage as well.

“It’s better than I could ever expect.  Every day I feel more secure and I feel that this is the right place for me.  The girls are so nice and the coaches and the staff are very professional. I really like it here. So far, I am more than happy.

In May of this year, Metz Handball took another big step forward and attended the DELO EHF Champions League FINAL4, in Budapest for the very first time in club history.  A repeat trip is never guaranteed and it’s not the declared goal of the French champion, but Louise Burgaard aims high.

“Returning (to the FINAL4 ed.) is not the official objective of the club, but it’s my personal goal. The girls have talked about it (the 2019 FINAL4 ed.) and how it was last season. It seems to be the biggest experience ever.

“I know it will be very hard to return to Budapest as our group is very tough, including teams like Vipers Kristiansand and FTC.  Although, I was quite surprised to hear about the nine goal loss of FTC in Kristiansand, this weekend.

Club handball aside, the 2013 World Cup bronze medalist is targeting another big event by year end with team Denmark – the 2019 World Championship, in Kumamoto (Japan).

“It will be another difficult tournament.  Like the Champions League, a World Cup is so hard to play and this year, I expect about seven teams at the top.  In any event, I hope that I will make the team and together we can make the difference in December,” concludes Louise Burgaard.