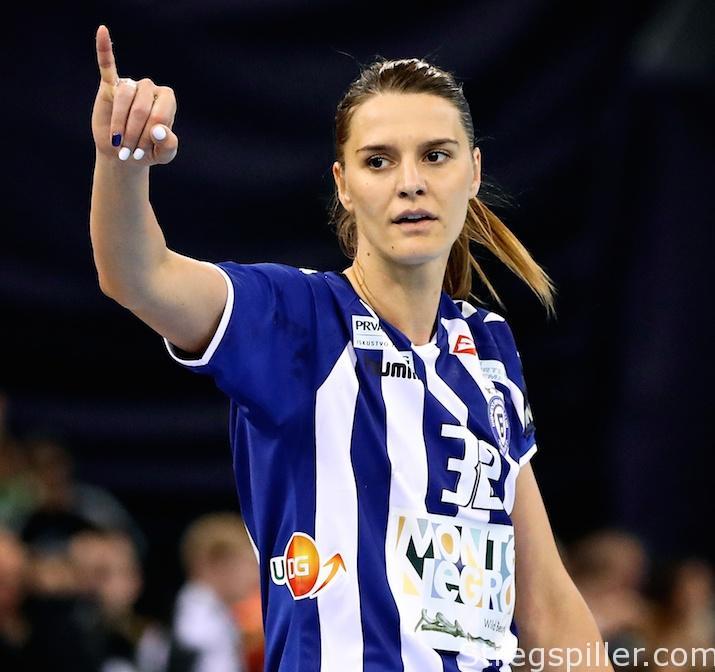 INTERVIEW – Surprisingly, Katarina Bulatovic finds herself back in Buducnost for a third time in her career.

Stregspiller.com talked with the seasoned Montenegrin international about a not so successful year in Rostov-Don – and what’s so special about Buducnost.

Buducnost appeared to be falling apart when a whole contingent of star players left the club at the end of the 2016/17 season. Katarina Bulatovic, Cristina Neagu, Dragan Cvijic and Kinga Achruk were just some of the key players who left the pride of Montenegrin handball that summer.

Yet, Buducnost survived. They even reached the main round of the Women´s Champions League in the season that followed and now Katarina Bulatovic has returned – unexpectedly.

But before we turn to the present let’s take a look back. Expectations were running high on both sides when the powerful right back announced a two-year contract with Rostov-Don.

“Rostov-Don seems to be the place where I can pursue my goals at the moment. The club fits my current ambitions perfectly well, as I am still hungry for winning trophies,” the veteran player explained after joining the Russian handball powerhouse.

However, the apparent perfect match did not last long. After only one season in Russia, Rostov-Don and Bulatovic came to terms and canceled the remainder of the agreement.

“I had some shoulder problems and I was happy that Rostov-Don agreed to release me from the contract, although I had one year left.

“It allowed me to return to Buducnost and I am very happy that I took this step.

“Now, my shoulder feels better and I am looking forward helping Buducnost to get back to the top again,” Katarina Bulatovic tells stregspiller.com.

“In many ways, my stay in Rostov-Don was great, although I did not see as much court time as I may have wanted.

“All in all, it was a rather tiring year.

“The club had the ambition to win the Champions League as well as the Russian championship and as the Russian league is very strong, reaching this objective turned into a tough job.

“Furthermore, playing in the Russian league means many long journeys and that was difficult as well – physically and mentally.

“Considering all, I am happy to be back in Buducnost, although the team has changed a great deal since I was here last,” she confirms.

In fact, this is her third stay in Buducnost, a club she joined for the first time in 2008 from Danish Slagelse DT.

Later, she spent one year in Romania at Oltchim Valcea and another twelve months in Györ before returning to Buducnost.

What’s the appeal of Buducnost?

“This also applies now, even though the team has been through some changes. But, after all, the coach is still the same (Dragan Adzic, ed.) and some other former Buducnost players have returned as well – we have a good mix of seasoned players and promising young talents,” she finds.

The experienced players Bulatovic is referring to include goalkeeper, Marina Rajcic, who has returned from French champions Metz Handball and Andjela Bulatovic who joined the team from Hungarian ERD.

Despite the fact that Katarina Bulatovic will be turning 34 soon, it is not a subject she wants to draw much attention to.

“I do not think of myself as one of the older or more experienced players in the team and I don’t feel that I have to play a leading role because of my age.

“I just want to play my game and feel good about it and, of course, I want to help the team any way I can.

“And I would just love to reach the FINAL4 of the Champions League with Buducnost once again,” she admits.

Why not this season?

“One of my greatest dreams is to reach the FINAL4 with Buducnost once more and I absolute think that this is possible.

“We have an ambitious coach who believes in the project and as I said before, we have assembled a team with an ideal combination of experience and talent, so why shouldn’t we have a chance this season already?

“Of course, I do realize that there are many good teams in the Champions League these days, but I think our spirit can take us far. Furthermore, we have a great home crowd at Moraca arena.

“The way, I see it there are two big favorites to win the tournament this season, CSM Bucuresti and Györ. Both (clubs ed.) have their minds set to take the trophy. But now that Vardar is gone, the road to the FINAL4 has become just a little bit easier and there is room for one more team at the top.

“We will have to take one of the two top spots in our group (that include Metz, Odense and Larvik, ed.) in order to make a realistic run and I certainly think that we have a good chance of doing just that.

“I am certainly prepared to fight for it with everything I have. It’s just great to be back,” says Katarina Bulatovic.