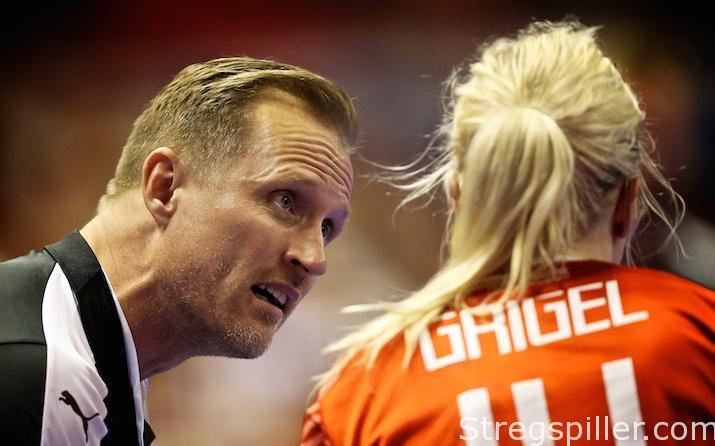 FEATURE – On the international stage, Danish coaches are more sought-after in women´s handball than ever before.  Experts see the human aspect and the ability to create a feeling of security as two of the key reasons, explaining the trend.

Bacon and dairy products may still be some of Denmark´s most important export articles, but further “services” have been added to the list as of late – coaching handball.

At the upcoming Women´s World Championship in Germany, in December five of the participating nations will be coached by Danes.

While it is no surprise that team Denmark is being led by a Dane – Klavs Bruun Jørgensen – it is remarkable that four other countries have Danes in the hot seat as well.

In the Netherlands, Helle Thomsen has already achieved impressive results, and so has Kim Rasmussen in Hungary.  But also outside Europe, Danes have caught the eyes of handball federations.

After many years of being in charge of Brazil´s female national team, leading them all the way to a 2013 World championship, Morten Soubak is now at the helm in Angola, while Ulrik Kirkely, former assistant national coach in Denmark, is building a team for the 2020 Olympics, in Japan.

Lithuania – they recently drew 29:29 on the road against Germany in a EURO 2018 qualifier – even employ a Danish coaching duo.  In addition, we see many Danes in charge of several top clubs around Europe.

Helle Thomsen is sharing her time between coaching the Dutch national team and the Romanian Champions League contender, CSM Bucuresti, while Martin Albertsen is head coach of another Champions League participant, the German champions from Bietigheim.

Did I miss some?  Probably.

But what is it that makes Danish coaches so attractive, when it comes to women´s handball?  Spanish and Icelandic coaches seem to appeal more to clubs and federations, on the men´s side.

Stregspiller.com has asked a couple of experts.

“I think Danish coaches have a reputation for possessing good qualities when it comes to the human aspects and in making players feeling secure.  That’s something women require a lot and probably more so than men do.

“I see it as an important reason, why Danes seem to be so highly rated in women´s handball abroad, while Spanish coaches are more sought-after in men´s handball,” says Denmark´s national coach, Klavs Bruun Jørgensen, who used to coach men before taking over the women´s national team in 2015.

“In Germany and Eastern Europe, in particular, female players are probably not used to coaches with these qualities, but they welcome theses characteristics, when they see them.

“However, I also see some self-perpetuating processes at work.  Once a coach gets a job abroad, the next one will follow soon thereafter, because clubs and federations catch sight of Danish coaches.

“In general, Danish coaches have a good reputation internationally, especially for their sound tactical skills and for taking care of their players,” he adds.

He also thinks the phenomenon can be explained by some career planning.

“In Denmark, many successful coaches have started their career at a very young age, which means that more opportunities will open up along the way, including foreign jobs,” finds Klavs Bruun Jørgensen.

“I have given this question a lot of thought myself over time, and I think that part of the explanation is the fact that we have a great handball culture in Denmark, a fact that is generally acknowledged all over the world,” says Jan Pytlick, former Danish national coach and former women’s head coach of HC Vardar Skopje.

Unlike Klavs Bruun Jørgensen, Jan Pytlick, who is now coach of the Danish league club Odense, is not so sure that the human aspects and the ability to create a feeling of security are all that important.

At least not in Vardar, when I was there.  In that team, the players liked the coach to be the one who is in charge and makes the decisions,” remembers Jan Pytlick.  Still, he finds a democratic coaching approach appealing.

“I am sure that providing space where players can express themselves, plays a role.

“In general, Danish coaches listen to their players and allow them to speak their mind, and this is highly appreciated abroad as well, I feel.

“Moreover, Danish coaches are known for being very thorough and tactically skilled – this plays a part too, of course.  All in addition, to a fantastic handball culture that we represent,” finds Jan Pytlick.

How will they do?

Will we also see a Danish coach lifting the World Championship trophy after the final whistle in Hamburg, on December 17?

Well, we can be fairly sure that Morten Soubak will not repeat his triumph from 2013, when he led Brazil to the title in Serbia.

Despite Angola´s long tradition of participating in major championships and Soubak´s indisputable coaching qualities, the African nation will not make it any further than the preliminary round.  And the same will hold true for Ulrik Kirkely and Japan.

Kim Rasmussen´s Hungarian team are in a tough bracket, maybe be the most competitive of all preliminary groups, and Denmark’s Klavs Bruun Jørgensen will hardly avoid a very challenging match in the round of Last 16.

It all leaves Helle Thomsen and her Dutch squad, with the best chances.

Will it be the championship, when the Netherlands will enjoy the better end, instead of the Norwegian favorites?

No matter the outcome of the World Championship, Danish coaches will remain popular – worldwide.