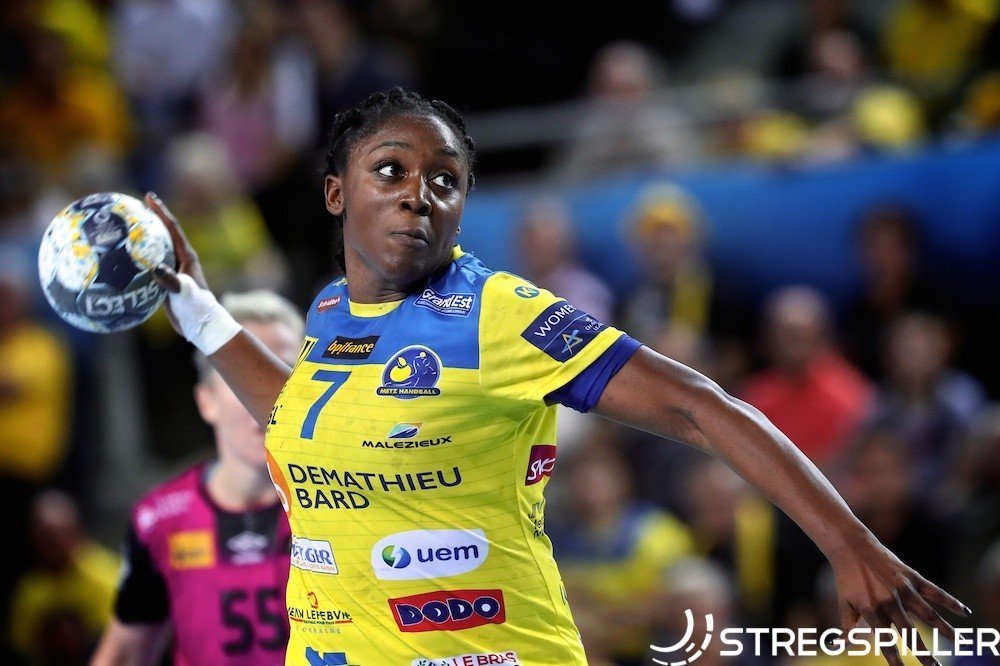 Grace Zaadi (Metz HB) hardly needs an introduction – the center back of the French record champion has been riding a wave of success together with her teammates of the French national handball team, in recent years.  A silver medal at the Rio Olympics back in 2016 was followed up with bronze at the EURO in Sweden a few months later.  In 2017, she succeeded in the World Championship, in Germany and in 2018, the accomplishments were topped again by winning the European championship at home.

On the club level, Zaadi and Metz have made significant improvements as well.  Case in point, her team’s first appearance at the DELO EHF Champions League FINAL4 in Budapest, in May of 2019.  There, Metz finished fourth surrendering third place in a dramatic match against Vipers Kristiansand (30:31).  The very same opponent, Metz faced two weeks ago again.  In Kristiansand, Metz was already leading comfortably by eight goals before losing the grip on the game.  A draw was all they got despite Zaadi’s 13 goals in that match.

On Sunday, the two teams met again in Metz and this time Zaadi & Co. pushed through all the way.  After 60 minutes, the squad of head coach, Emanuel Mayonnade, had won the battle in convincing fashion and Grace Zaadi took the time to reflect about the recent games between Vipers Kristiansand and Metz HB, the consequences of a growing injury list and the upcoming World Cup, in Japan.

“In May of this year, we lost against Vipers at the (Champions League ed.) FINAL4 and it was a big disappointment.  Two weeks ago we did a nice job in Kristiansand.  We played very well for 45 minutes and were leading by eight goals.

“But, Vipers did not give up, they continued to play and staged a nice comeback – in the end it was a draw and that was very hard for us to accept.  We scored 38 goals and did not win the match!

“Today, we played a strong game, especially in defense and Ivan Kapitanovic (goalkkeeper Metz ed.) played an amazing match – it was very nice.

Following the severe knee injury of Laura Glauser (goalkeeper in Metz and the French national team ed.), Metz has been actively looking for another, experienced goalkeeper, to share the burden.  A burden that’s currently carried by Ivana Kapitanovic.  In the second leg match against Vipers Kristiansand, on Sunday night, the Croatian national keeper had a 45% save rate and was a key player.

“We know that Ivana is a very good goalkeeper but if she has an “off day”, she feels a lot of pressure.  It’s up to us to protect Ivana and play strong defense.  If we defend well, she will be able to stop a lot of shots.

“No doubt – right now it’s a difficult situation.  Laura (Glauser ed.) is a big leader in this team, she is a very important player but for now, we have to do without her.

Challenging start to the season

“Honestly, at the beginning of this season we were facing a big challenge.  Beatrice Edwige had left Metz to join Gyoer – there was nothing we could do about it and we had to build a new team with the other girls.

“But, when Xenia Smits got injured it got tough because she is a key player on both ends of the court.  Now, we all have to do a little bit more to compensate for her absence.

“Then came the injury of Laura Glauser and that made the whole situation even more difficult.  Still, we want to achieve something this season and we can’t cry all the time – we just have to work harder and give our best in each and every game.

“I am hoping for a speedy recovery of Xenia and that she will return quickly, but all in all it hasn’t been an easy beginning to the season.

“We want to defend our title”

In less than a month, Grace Zaadi and her national teammates will travel to Kumamoto (Japan) with the objective to defend their title at the 2019 IHF World Cup.  But, the tournament is not on her mind yet as Metz will face two more Champions League matches along the way.

“Japan is so close, but still so far away.  First, we want to win two more games and collect as many points for the main round of the Champions League – that’s most important, right now.

“Then, I am looking forward to the World Cup in Japan as we want to defend our title.  It will be a crazy adventure but I hope it will turn out to be successful.