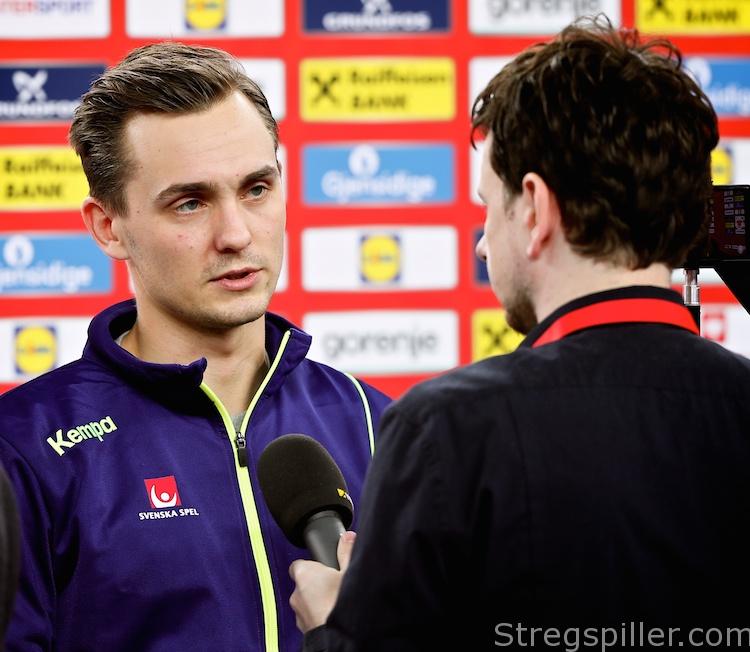 “We are ready to fight”

Sweden grabbed their chance and qualified for the semifinals of the EHF EURO 2018, where the team will face arch-rival Denmark. I talked to left-wing Hampus Wanne during today’s media call and noticed him being very calm and relaxed. Check out what he had to say ahead of the battle with the Olympic champion.

How much did you suffer during the French match against Croatia?

HW: It was a bit „sweaty“ to watch this match, but I had a good feeling that France can do it and win the match. Honestly, I was calm, because already in the first half I saw that France will win this game.

Reaching the semis is already a big deal for you, but once you’re there the goal becomes obvious?

HW: Of course, I mean now we’ll do everything to defeat Denmark.  They are an incredibly good team; they have shown it throughout the last ten years that they belong at the top. But we’re happy – we don’t have anything to lose. We are ready to fight.

So you think the underdog role fits you?

HW: I don’t think that in semifinals you can say that.  But, you’re right, Denmark is the favorite in this game. This is the first time since 2002 I think, that Sweden plays a semifinal in a European championship.  Denmark is always there, always reaching this stage or even the final. So, they are the favorite, but we will give everything – for sure.

Everyone talks about Mikkel Hansen or Denmark’s great goalkeepers. But is there someone else on their team you like a lot?

HW: Actually, it’s the keeper – Niklas Landin. He can shut his goal; he proved that many times. But, I think our keepers are on the same level as he is; they are also very good. The competition between the goalkeepers will be really tight. If Lauge has a good day he can certainly be amazing or Svan – he can jump and score no matter how tight the angle is. So, these are the guys who will make it difficult for us.

What is it that makes scoring, especially from the wing position, against Landin so difficult? His size?

HW: Yes – he is very tall, and then he knows how to put himself in the right position. He watches videos, so he knows what to do and where to position himself depending on the opponent. He’s also very confident – it’s his strength.

When a keeper knows you very well, do you try to adjust even more before a game like this?

HW: I have to do it all the time, whatever “next game” there is. It doesn’t matter if it is a championship- or Bundesliga match or Cup game, every goalkeeper is good and knows you. I don’t think about it too much – I jump and look where they are or what they do and then score.

HW: Yes, I am. I’m in Germany for five years now, and I already played a lot of big matches. I don’t want to say that it’s nothing new for me, after all it’s the national team.  But one thing is for sure, you never know what’s going to happen. You think it’s gonna be this way and in the end it’s not at all as you predicted. What else can you do other than relax?  When you think too much about it (the game ed.) will stress you out. It’s what I always do – relax.

Your defense and your keepers will be the key to win the game – no?

HW: For sure – and scoring some easy goals against them. The Toft brothers will be in the center of their defense, and they are strong.  We need to use our chances to avoid making it more difficult for ourselves.

The Toft brothers are not 25 years anymore, but still play on a very impressive level.

HW: Yes. One of them goes to Paris, the other one plays for Kiel – it definitely doesn’t matter how old they are. Both of them have a lot of experience as they played in a lot of big games, already. We will see how they do tomorrow.