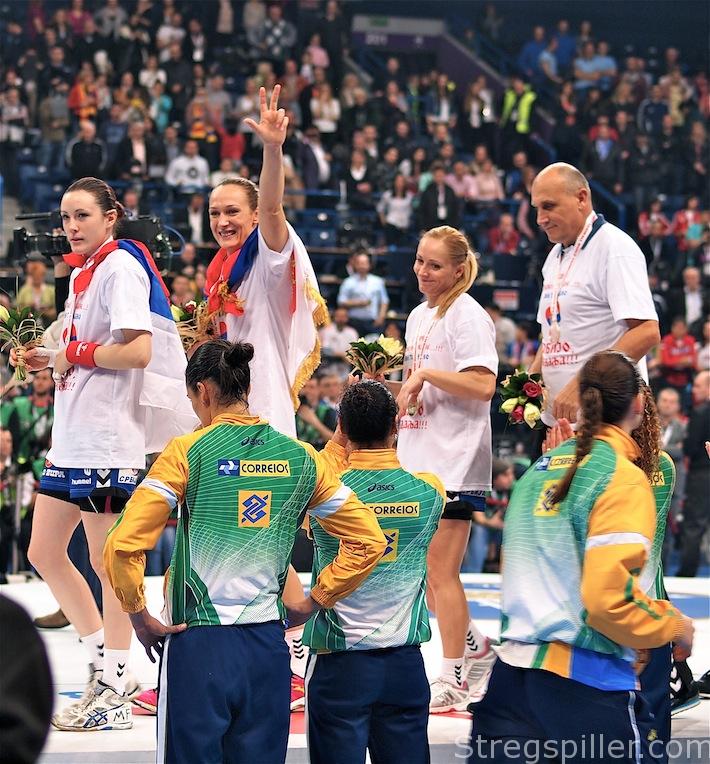 December 16 – Handball World Cup 2013 has entered its first elimination stage; the Round of Sixteen.  12,000 passionate spectators have made their way to Belgrade’s colossal Kombank Arena in support of the home team versus South Korea.   Match number 70 of the tournament is the last one of the day and the squad from Korea just tied the game despite having one player less on the pitch, with thirteen seconds remaining before regulation time.  One last, rushed attack of Team Serbia ends with a free throw and time ticking away.  With only two seconds on the clock, veteran player Jelena Eric grabs the ball and scores the buzzer beating goal that sends her team to the quarter-final and the proud nation of Serbia into ecstasy.  Eric’s last second goal score should take the women national handball team of Serbia on an epic journey culminating in what many considered the best women handball final ever, in front of a capacity crowd at the same location only days later.   Six months later Jelena Eric ended her impressive and outstanding career helping Serbia one more time to qualify for EURO 2014 in Hungary and Croatia.  We had the chance to catch up with Jelena and collect her views on the prospects of women handball in general, Team Serbia, the upcoming women EHF Champions League 2014/15 and what will be her future plans following a remarkable career as a handball player.

Q: Earlier this summer you played your very last match with the Serbian national team and helped qualifying for EURO 2014 – how has your life changed since then?

A: The last match of my handball career I played almost four months ago. Thereafter I started to live life like normal people do – enjoying life and summer and doing things I never had time to do while I was a professional handball player. Actually, I was ready for it – I have been preparing myself for this step for almost two years.

Q: How did you experience the end of your career as an active handball player on the club level as well as on the national team?

A: I think that ending my career came at the right time. Finishing with a silver medal at World Cup 2013 with the national team gave me the strength to finish the season with my club. Unfortunately, I did not have the same kind of success on the club level during my last two seasons in Russia.

Q: Did you regret ending your career as a player at this point in time?

A: No.  As I said, ending my career was right on time with the last match against Slovenia qualifying for EURO2014.

Q: What are you doing now and what are your plans for the future? Will you continue to stay involved in handball in a different capacity?

A: The most important thing for me was to finish my studies of economics. That I did three years ago. When I was younger, I was not thinking nor planning to stay in handball after my career end.  In the meantime I realize that handball is the thing that I know best – so I got the idea to stay in tune with handball. For now, I am working as a handball delegate in Serbia’s secondary league and as team coordinator of the Serbian women national handball team.  I never had the opportunity to work in this capacity, simply because I was a professional handball player for so many years.

Q: During your long career you spent significant time in three countries to play handball (Serbia, Denmark, Russia) – how would you describe your experiences in each one of them?

A: Handball in Serbia has progressed when compared to the period before I decided to play abroad. At the time, I played with good teams in Serbia but on the European level we did not have much success. I moved to Denmark when I was 25. Back then I chose a young team in the Danish league – KIF Vejen.   A decision I did not regret and I still have lots of friends there. In Russia, I played for Astrahanocka – I was their first foreign player. In general, there are more similarities between Russians and Serbs when compared with people from Scandinavia. But it did not help me so much because Russians have a different style of playing handball. They like playing at a slower pace while I was trying to give them some taste of European style of play – fast, backed by a strong defense.

Q: How easy was it to adjust to the way of life in Denmark and Russia?  What created the most problems?

A: In the beginning it was hard in Denmark. I spoke English for almost two years before I started to speak Danish. The weather was not so nice either, raining almost all the time. I was lucky that I had good teammates who helped me a lot. In addition, there were many Serbian players around at the time as well. In Russia it was different. Nobody spoke English. It took me quite some time beginning to understand Russian. Overall, I was not so happy there like I was in Denmark. My social life was not so great because of the language barrier. Fortunately, my husband was with me and during my last year Mara Jovnovic and Miranda Tatari. We made life good for us as much as we could.

Q: What did you enjoy and what did you miss most in each one of these countries?

A: I was very happy in Denmark. Playing in the best league with and against the best players in the world. Today, I still miss my friends from Kolding and Russia.

Q: How significant was the language barrier in Denmark and Russia?

A: It was not such a big problem in Denmark because everybody spoke English. In Russia it was not like that. Players quickly learn the language of “handball” but eventually they also need to know the foreign language so they can live life in countries where they have chosen to stay. It is very important for foreigners to show the local people that they want to learn the language and that they want to be accepted. They need to have some role in social life otherwise they will not stay for long in that particular foreign country and they will not be able to provide their best to the team.

Q: This past May the women EHF Champions League played their first Final4 tournament to determine the winner of the competition – how do you see women club handball developing on a European level from here?

A: It was great to see that women get the same attention as the men’s side. I think it was a wonderful idea to organize a Final4 tournament for women as well. I also believe that there is a need for more teams from all around Europe that can challenge those clubs who are constantly amongst the four to six best in Europe.

Q: What needs to be done at the EHF and/or IHF to further lift women handball to the next level?

A: Marketing should play a major role in this development. Women handball should be available to everybody. I think handball in schools can further increase the growing interest of girls. We also need to explain to young girls that handball is not such a tough sport as it looks like. IHF and EHF need to find ways accomplishing that.

Q: How do you rate the chances of a Serbian women club becoming a major force in the EHF Champions League in the future?  What does it take?

A: I think that not enough talents have developed in Serbia lately. The biggest problem is that coaches are not educated enough. They do not want to change their way of thinking and learn from the examples set by other successful countries. This is the primary reason why Serbia has no candidate that will fight for the highest ranking in European Cups. The whole system needs to be revamped. We need to start all over – from the beginning. Keeping the things where we were best and take on some new ideas from others that have proven to be successful.

Q: Which team would you consider being the favorite to win the 2014/15 Champions League and why?

A: Buducnost and Vardar are my favorites. Both teams have good players in defense and attack. Just some small details and errors will determine the winner.

Q: Looking back what was the best or most memorable game of your career and why?

A: The qualification match against Romania for EURO 2006 with Anja Andersen as coach comes to mind. It was a special experience. Likewise, the game against Norway at World Cup 2013. We won against the current World and Olympic champion; we were only the second team in Europe accomplishing it.
On the club level, I remember the match with KIF against Viborg 2005/2006 and I have fond memories of the EHF Cup final with Randers against Elche. Of course, we won.  All games have had a special charm and they have a specially place in my memories.

Q: Following a long dry spell, in recent years Team Serbia managed to take 4th spot at EURO 2012 and become Vice-World Champion in 2013 – how do you rate the chances of the current team that this positive trend will continue and why?

A: I really believe that this positive trend of good results will continue when playing the big competitions. The current team has a special energy. The girls are very strong mentally and aware of how much they can achieve. This is the biggest advantage of this team

Q: Who are the key players of Team Serbia today and how important is the role of national coach Sasa Boskovich?

A: Sanja Damnjanovic, Andrea Lekic, Dragana Cvijic and Katarina Tomasevic are the key players. But we should not forget all the other players as well. Serbia has a long bench that needs to be used in the right way. Sasa believed in this team from the beginning. He was the only one who told us at the first training that we are going to fight for a medal at World Cup 2013. You can imagine how big his influence is.

Q: Would you consider stepping in his (i.e. S. Boskovich’s) footsteps in a few years and become a coach yourself – possibly the coach for the national team?

A: Maybe coaching in some handball school but not so soon and serious.

Q: Looking ahead – which four teams do you foresee to fight for the EURO 2014 gold medal and why?

A: Norway – they have the continuity of good results behind them. Hungary-playing at home. Montenegro as the defending champion – but it will be very difficult for them. Serbia – of course, I believe in my team. Don’t forget about Poland, France and Croatia (now or never for this generation).

A: Osijek is close to the Serbian boarder, so I will be there to support the Serbian team. I am also planning to go to Budapest to watch the finals.

Q: If you would give advice to a young handball player in Serbia today – what would it be?

A: Train and enjoy handball. Nothing is unreachable if you believe in it

Q: Anything you would have done differently when looking back at your career?

A: No – I was very happy when I played handball. The sport has given me the opportunity to travel, meet new people, experience different cultures, learn foreign languages​​, and to make friends around the world.