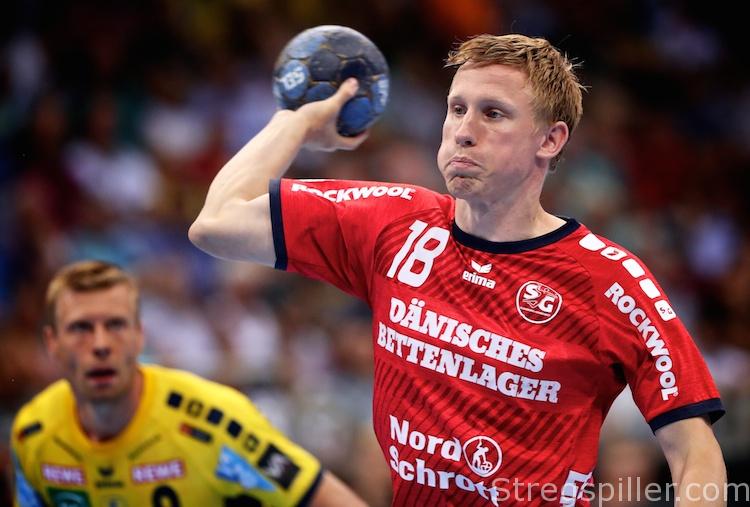 “I play my own game”

INTERVIEW – Magnus Jøndal is already 30 years old, an experienced Norwegian national team player but this year he decided to try the DKB Handball-Bundesliga together with SG Flensburg-Handewitt. Right before the official start of the season, I talked to him about his move, why his timing maybe perfect and what he is expecting to achieve during his time in the North of Germany.

First, let’s talk a bit about the Super Cup against Rhein-Neckar Löwen – did you expect to sit on the bench for most of the time or did your coach tell you beforehand?

MJ: No, he didn’t tell me anything except for the fact that Hampus Wanne will be starting. Hampus is a very good player and I support him to do well.  I wanted to take my opportunity when I’d get it; I did so when I came in and scored on the penalty.

Some of your teammates remarked that losing by seven goals didn’t reflect how close the game was most of the time. Do you agree?

MJ: Yes, I do. In the first half both teams played really well in offense, as the result showed.  I think we played well for a very long time, but then we made some mistakes and they scored some easy goals on counter attacks.  Nevertheless, losing by seven goals is too much.

You are 30 years old – usually players enter the league at a much earlier time. Why is now the perfect moment to come to Germany?

MJ: Well, now I got the opportunity.  For the past two years, I have played in Denmark and I also competed in several championships together with the Norwegian national team. Flensburg really wanted me and it has always been a dream of mine to play in Germany’s Bundesliga, especially for such a great club as Flensburg. It’s something I have dreamt about for a long time.

Two of your predecessors on left-wing, Lars Christiansen and Anders Eggert, are number one and two in the all-time scoring list of Flensburg. Is this some kind of a burden for you?

MJ: To be honest, I don’t think about it. Of course the two of them have been really, really good players. But you can’t think about it all the time. I have to play my own game and only focus on how I can help Flensburg as much as possible.

After the first few weeks at your new club, where do you see room for improvement and are you already on the right track, personally?

MJ: Actually, the first weeks were quite good. I have shared time on the court with Hampus (Wanne ed.) and I have been taking penalty shots.  That I wasn’t expecting when I arrived, as I haven’t taken them for a couple of years. Regarding improvement – obviously I don’t know the other teams in the league, so far but I have to get to know them and their goalkeepers.  And, of course, I have to adjust to my own teammates.  I also have to get used to this kind of atmosphere as it was at the Super Cup.

Did you enjoy the atmosphere in Düsseldorf (official attendance 8,078 ed.)?

MJ: Oh yeah, I did.  I have played in arenas like this one before with the national team. This makes it fun and that’s why you play handball.