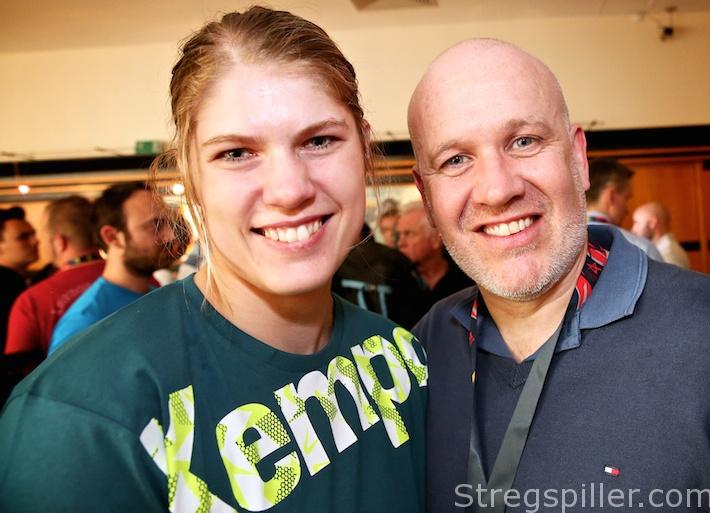 Jørgensen is feeling well in Romania

When Danish international Line Jørgensen made the move from FC Midtjylland to CSM Bucuresti, she did not only join a Champions League debutant.  It was also her first stay outside Denmark.  However, the 25-year-old, hard-shooting right-back has no regrets.

“I feel great at the club and in Romania, in general.

“Of course, many things are not like they are back home, but there is also something refreshing about that.

“In Denmark, I was used to everything being very planned and controlled, while things are often a bit more free-flowing here, and I find that to be a rather nice contrast.

“Yesterday, for instance, we got to the training hall 30 minutes late, but that did not really matter – one improvises if things are not going exactly as planned!” says Line Jørgensen who missed Denmark´s Olympic qualifiers back in March due to a knee injury.

The Danes could definitely have used her in those matches, where she might have made the difference between success and failure of not qualifying for Rio.  Now, she is completely fit, back in top form, and ready for the FINAL4, where her team has been the surprise package so far.

Scandinavians helping each other

She admits that a big part and main reason for her feeling so well in Bucharest is the fact that there are three other Scandinavian players in the team – Jørgensen´s teammate in the Danish national team, Maria Fisker, as well as Swedish internationals Isabelle Gulldén and Linnea Torstensson.  On top of this comes a Scandinavian coach, Danish Kim Rasmussen.

“Of course, it has helped me a lot, that there are so many other Scandinavians here, and the fact that we have a Scandinavian coach means even more.

“This means that we train in a Scandinavian way, and that the team´s methods of playing are inspired a great deal by Scandinavian handball philosophy.

“It also means that tactically we are always very well prepared for our games,” says Line Jørgensen who will have to say goodbye to her Danish coach after this season.   Kim Rasmussen will be moving to another job, which has not been officially revealed. However, it would be a big surprise if he is not presented as the new Hungarian national coach soon after the FINAL4!

“Of course, I find it annoying that Kim is leaving, but I simply hope we will get a just as qualified coach as his replacement, says Jørgensen who has one year left on her contract with CSM.

“I have not really made up my mind what is going to happen after that, but I do not think I am finished playing abroad by then.

“Right now, the thought of returning to the Danish league does not really appeal to me, but of course, I do not know how I look at things in a year from now,” she says.

While CSM as a team are Champions League debutants, it is Line Jørgensen´s second FINAL4 in Budapest.

She was part of the FC Midtjylland team who finished fourth 2014, and she does not hide that she expects a better result this time.

“This time it is so much different from two years ago, when we probably did not believe that we had a chance to win.

“I really think we have an opportunity this time,” she says.

In CSM´s quarter-final, where the club won both legs against Rostov-Don by one goal, the Romanian side simply appeared tactically much better prepared than their Russian adversaries. Line Jørgensen agrees.

“I think it was the deciding factor – we were tactically better prepared.

“That is not only a question of having the right tactic, but also about having the players who are able and willing to follow and execute the plan.

“That was what we were doing against Rostov-Don – although we were under a lot of pressure, as we wanted to reach the FINAL4 as badly as them.

Saturday, Vardar will be awaiting Line Jørgensen and CSM in the semi-final.

“I think tactics will play a big part in this game, again.

“The team who is better prepared – and better at following the tactic – will win, and I think we will have good shot at it,” expects Line Jørgensen.