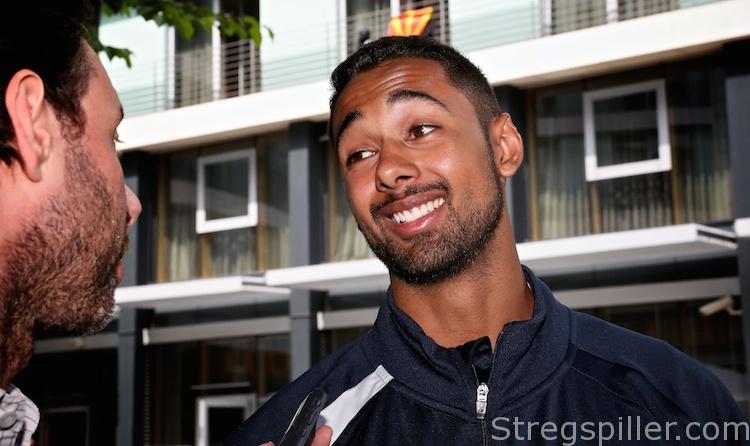 Just another day at the office

Two games and he already got the world at this feet.

Melvyn Richardson is this kind of player. Yesterday, at Lanxess Arena, he scored f0ur goals within minutes against Spain, in Frances’ first game of the main round at the 2019 World championship. That’s exactly the same performance he delivered against Russia on Thursday, his very first game in the ongoing competition.

The player from Montpellier, who’s experiencing a hellish season with his club, was sidelined as the 17th player initially, at the beginning of the tournament. National team coach, Didier Dinart, preferred to take Nicolas Claire along – in hindsight a strange idea, considering how poor Claire’s performances in the national team have been for the past few years. On second thought, it may have made sense, as Richardson is there to learn.

“At the moment, I’m living a dream. I watch the guys, how they prepare, how they play and I take it all in. I’m sure it will be useful to me one day,” he said after his first couple of games for France.

Richardson was part of the starting lineup in his first game, where he scored four goals in the first thirty minutes, confirming how correct Dinart was to call him back. But that was against Russia – a game that didn’t count for anything, and you were left with the idea that perhaps, the young left-hander wouldn’t deliver on a bigger occasion. Think again. The scene was a different one, but the performance just the same.

When Richardson entered the court on Saturday, France were ahead against Spain, but not by much. And Arpad Sterbik in goal of Spain was shaking the “Les Experts” at the core.

“Arpad is a very good goalkeeper, but you can’t start thinking where to shoot or reflect on any of these type of things. You’ve got to play your game. If it goes in, it goes in, if not, somebody else will do the job,” Richardson said in the mixed zone.

He didn’t have to wait for anybody to do the job, as he delivered another brilliant performance. Just as he did a couple of months ago, in the same arena, when he helped Montpellier to lift the Champions League trophy for a second time in the club’s history.

“Who wouldn’t get excited about playing a World Cup game against Spain in Cologne? It’s normal to look forward to it. It’s my first competition and it’s wonderful. I’m living a dream – I said it before, but you can’t stop here,” he explains.

And, he didn’t stop. Richardson’s four goals assured France of getting their first two points in the main round. Even though it looked easy from the outside, for Richardson, it was all about getting ready quickly.

“It was not easy when I entered the game – it was intense and everybody’s adrenalin was flowing. I had to adjust quickly but the players around me did everything to set me up properly,” he recalls.

Richardson did so well that he even impressed coach, Didier Dinart.

“Melvyn has been extraordinary and he has to be praised for the work he did.  It doesn’t come as a surprise by any stretch of the imagination, he’s up to what we could expect from him . I think France has found a new center-back,” the coach concluded.

What many would consider a night among stars, felt like another day at the office for young, Melvyn Richardson. Even though his office is Cologne’s Lanxess Arena, for now.