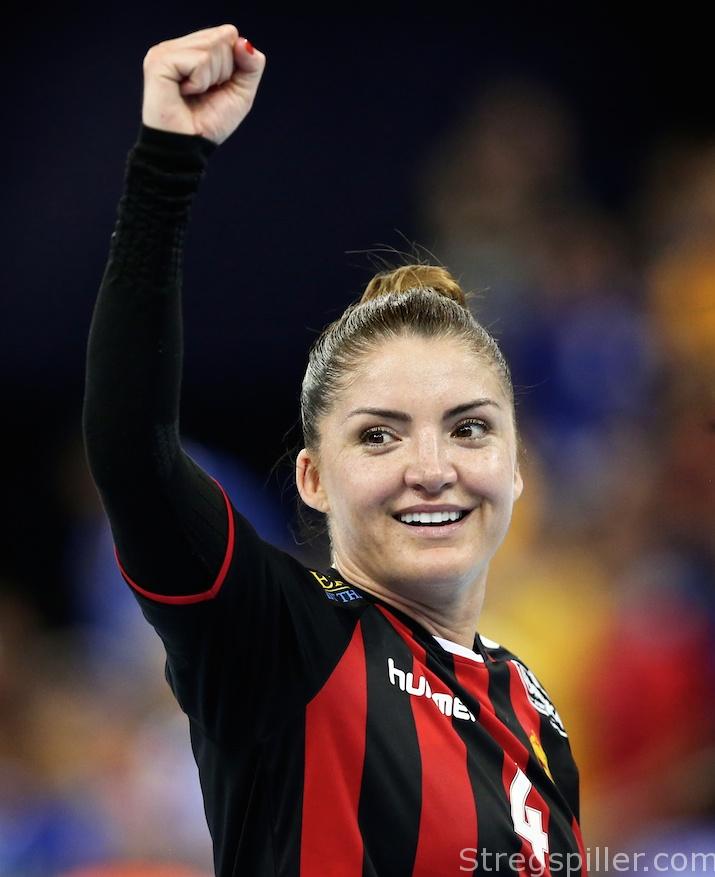 “We just focus on doing our job”

INTERVIEW – Jovanka Radicevic and her teammates at Vardar try not to get distracted from club owner Sergey Samsonenko´s threat to withdraw his financial support from the organization after this season.  Instead, they are focusing on the tasks ahead of them.

On a more personal note, Radicevic hopes to stay in Vardar for the rest of her handball career, as she reveals in this exclusive interview with stregspiller.com.

“We just focus on our job, which is to do well in the Champions League first and foremost.”

Maybe, it is no wonder that Jovanka Radicevic is a bit evasive – to say the least – when being confronted with Vardar owner Sergey Samsonenko´s recent statement, intending to withdraw his backing from the Macedonian club after this season.

Without the money from the Russian oligarch, Vardar’s future looks gloomy, and it would only be natural, if this uncertainty would cause frustration among the players.

To the 30-year-old Montenegrin right wing, who has been with Vardar since 2013, there is no other club than Vardar Skopje that she would like to play for in the future.

“I feel like home here in Vardar, and this is where I want to stay!” says Jovanka Radicevic who joined from Gyor, four years ago.

From third to second was a big step

During her first three years with Vardar, the team was branded as the “eternal number three” in Europe after finishing third at the FINAL4 in as many years.

Last season, however, Vardar managed to take the next step up and finish with a silver medal, after pushing the favorites from Gyor into extra time.  According to Radicevic, moving from third to second position was a major step upwards.

“We were happy to reach the Champions League final, after all.  And just like I felt on May 7th – the match day of the final – I still feel today.  We did not really lose that last game; they were just a bit more clever and luckier than us in the end,” she says.

Reaching the final match of the tournament was a big step for Vardar, and only four weeks later, the club’s men’s team not only played in the last game of the 2017 FINAL4 in Cologne, but they won the prestigious competition.

But the success didn’t cause any jealousy amongst the women, as Radicevic reassures.

“We were just happy to be the first club in Europe to have two teams in the Champions League final, in the same season.

“Simply put – everyone is proud of this big success for the club,” she says.

Some change, but not a weaker team

Now, a new Champions League campaign is waiting, and no matter what happens in the club next summer, Radicevic is optimistic about the upcoming season.

Recently, Vardar finished second, competing for the “Vardar Trophy 2017” after losing the final against Rostov-Don by no less than seven goals.  Still, she is happy with the preparations, so far.

“We had a strong preparation phase.  The first 12 days were just running and working on fitness, and we realized that we will have to continue working as hard, if we want to win the Champions League this season, and we will,” she says with determination.

Like most other teams, Vardar have undergone some changes over the summer. Both left wings – Camilla Herrem and Tamara Mavsar – left, and so did line player Anja Althaus.

Polina Kuznetsova (left wing) has joined from Kuban Krasnodar, and Dragana Cvijic (former Buducnost) replaced Althaus on the line.  Furthermore, the back court line has been extended by Mirjeta Bajramoska (former Krim Ljubljana).

“Yes, we have had some substitutions in the squad, but we still have a very strong team.

“On the line, in particular, I think we are much stronger than before,” says Jovanka Radicevic, referring to the arrival of Dragana Cvijic who will pair up with Andrea Covic.

Ready to take the final step

The obvious question remaining:  Is Vardar strong enough to take the last step and win the Champions League this season?

In the preliminary round, en route to the 2018 FINAL4, Vardar will meet opponents such as FTC Budapest, Larvik and the winner of the qualification group including Germany’s Thuringer HC, Swedish Hoor, Austrian Hypo Niederösterreich and Spanish Mecalia Atletico Guardes.

In the main round, the Macedonian champion will be up against the three best teams from Group C, consisting of Buducnost, Metz, German debutants Bietigheim and – most likely – another newcomer, Norway’s Vipers Kristiansand who are the top contender to win their qualification group.

“I think us and FTC will be the top contenders in our bracket of the tournament.  But obviously, we have to show on the court that we are worthy of being favorites,” says Jovanka Radicevic.

Most people will probably doubt that Vardar will be capable of going all the way and win the Champions League this season.

But then again, how many people believed in them ahead of the 2017 FINAL4?

Jovanka Radicevic is not listening to the experts who have voiced doubt in a successful Vardar campaign.

“This season will be the season, when we take the final step up.  I believe in it, and that’s what we will be fighting for!”