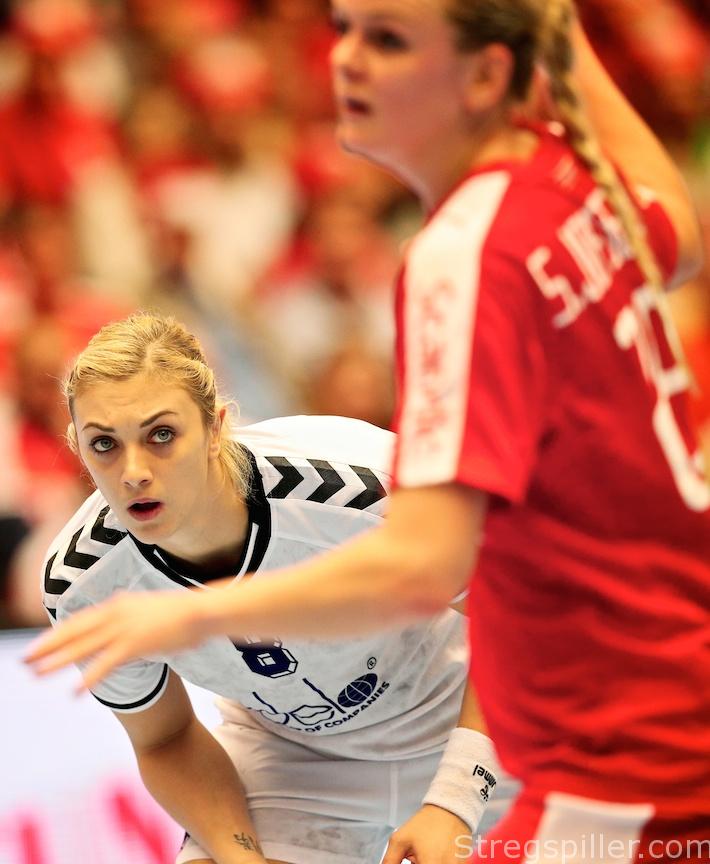 Keep Calm and Carry On

The Russian champions from Rostov Don who had yet to lose a match, were in a position to not only secure the top spot in Group 1, but a quarter-final berth as well.  Still, Jan Leslie had to do without his number one line-player and central defender, Ksenia Makeeva.

Coach Elek’s team was looking to reverse course after a tough loss in Baia Mare.  Given the difficult nature of the two remaining Champions League games (away against Larvik HK and Baia Mare at home) a victory against Rostov Don would have been much appreciated.

In the end the draw fairly reflected the efforts of both teams, in a match that was hard fought from the very first minute.  Neither squad was able to pull away and while Rostov-Don was trailing most of the time, it was remarkable how coach Leslie’s crew stayed calm and collected throughout the game in front of 3,000 frenetic Hungarian supporters, at the Syma Sport and Event Center, in Budapest.

Both teams began the match fully concentrated with FTC taking the early lead.  Left-winger, Nadine Schatzl – she had her most productive Champions League game of the season – and left-back, Szandra Zacsik put the heat on the unbeaten crew from Russia from the get go.  But by the 18th minute Elena Slivinskaya – who showed an outstanding performance on the defensive end – had arranged for Rostov’s first lead in the game and when Davydenko increased the score one minute later, Gabor Elek immediately took time out, interrupting Rostov’s momentum.  His coaching colleague, Jan Leslie followed suit in the 24th minute – FTC had just gone ahead by one goal.  The two men were fighting just as tough as their players, not allowing the other squad even the smallest advantage.  Scoring her fourth goal from the 7-meter mark, Luca Szekerczes had settled the result at half time -15:13.

After a hard hit late in the first half, Szandra Zacsik was back on court and as in the first thirty minutes, she, Schatzl and FTC’s line-player Piroska Szamoransky kept Rostov at bay.  40 minutes into the game, coach Leslie saw the need for his second time out – FTC had increased their lead to three goals and was threatening to run away.  Again the rhythm of the game changed as Rostov cut the deficit.  Anna Sedoykina was now tending Rostov’s goal instead of Katrine Lunde, who was struggling with shots from FTC’s wing players, in particular.  But five minutes later, Lunde was back – Sedoykina could not get her hands on any ball from long distance, since Spanish playmaker Nerea Pena and Zita Szucsanszki had entered the shooting contest.

Three minutes before regulation time, FTC was leading by two and looked like the winner.  But Rostov did not crack under pressure; star player Ekaterina Ilina and Regina Shymkute drew even and with one player less on the pitch, FTC did not risk a premature shot on Rostov’s goal in the dying moments of the match.

No doubt – Ilina’s Kempa conversion of a pass from left-wing position in the 29th minute of the first half.

A tough call, considering the strong, collective performance of both teams.  On FTC’s side, Nadine Schatzl (left-wing) possibly played her best Champions League match to date and teammate Luca Szekerczes was flawless from the 7-meter line, scoring six times on as may attempts whereas, Ilina, Shymkute and Julia Managarova stood out from an otherwise very compact Rostov crew.

Goalkeeper of the Match

The award goes to FTC’s, Melinda Szikora.  She was a tad better when compared to Katrine Lunde, who could not repeat her stellar performance against FTC Rail Cargo some weeks ago in Rostov Don.

When Nerea Pena collected her 2-minute penalty with as many minutes to play for, both teams did not go for a decisive shot anymore.  Too much was at stake, especially for Gabor Elek’s squad.

Like the game, it ended in a tie between Gabor Elek (FTC) and Jan Leslie (Rostov).  Both coaches were quick to make tactical adjustments when needed and neither one of them allowed the opponent to gain momentum.  Elek and Leslie immediately called for time whenever it looked like the other team was gathering steam.  The excellent bench performance of the two men matched the action on the floor.

For Rostov Don the deed is done; the top spot in Group 1 cannot be challenged anymore. As mentioned before, FTC Rail Cargo will travel to Norway’s southern coast attempting to beat Larvik for a second time before a – possibly decisive – showdown for second place, against a red-hot team from Baia Mare, in the  Hungarian capital.