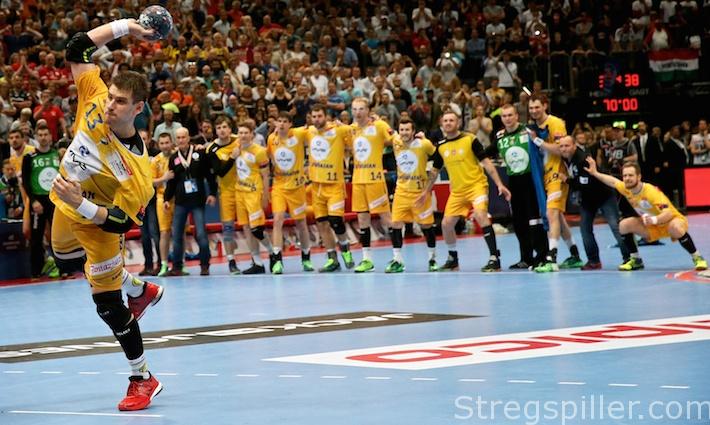 Both, Kielce and Veszprém, had been at the FINAL4 twice before, without ever winning it – but that was just about the only thing they had in common.

While Veszprém was widely recognized as one of the top favorites before the 2016 FINAL4, Kielce surprised everyone by defeating Paris 28:26 in the semi-final.

A key question would therefore be: Would Kielce be content with their sensational win on Saturday and possibly not hungry enough anymore to perform another unexpected upset?

Yet, another question begging for an answer had to do with the fact of Veszprém having gone through extra time before defeating Kiel 31:28 in their semi-final victory.  Would a few less hours of recovery time make a difference?

We have seen unbelievable FINAL4 comebacks before, but what Kielce accomplished this Sunday night was the most amazing ever!
By the middle of the second half, I had a story ready about Veszprém cruising to their first Champions League title in history through an impressive performance, but leaving no room for excitement.
15 minutes later, I sent that story down the drain!
At that point, Kielce had caught up with Veszprém´s nine goal lead, forcing the match into a nail-biting extra time and then – almost inevitably – into a penalty shootout, where Julen Aguinagalde finally put the deciding ball into the back of the net.

Veszprém were dominating these first 30 minutes in its entirety.

Coach Sabate’s squad got off to an easy start, quickly securing a 3:0 lead, and did not look back for the rest of the first half.

Laszlo Nagy & Co.did not really come up with anything new that should have come as a surprise to Kielce; they more or less did what they did all season long, and this was simply too much for the Polish side in the opening half.

The elastic Hungarian 6-0 defense was a tough nut to crack for Kielce´s attack, while Veszprém´s advancing backs ruined the rhythm of the Polish offense; preventing their powerful shooters to get their chances from distance.

On the other side of the court, Veszprém´s variable play was a severe challenge for Kielce to deal with. mJurezki & Co. had particular problems, when Veszprém´s wingers moved in toward the middle.

As a logical consequence, Veszprém stayed in firm control throughout the first period, and every time Kielce began to get closer, they tightened the grip again.

Veszprém started where they left off at half time, and for the next fifteen minutes, they were en route to steamroll Kielce.
Veszprém got up by six goals (21:15), eight goals (24:16) and nine goals (26:17).  However, after Andreas Nilsson made it 28:19 with 14 minutes left, Veszprém went cold –ice cold – in fact Xavi Sabate’s team stopped scoring. The Hungarian champion more or less stopped playing handball.

Weak and poorly prepared shots were sent towards Slavomir Szmal´s goal or the ball was simply lost.  It was as if Veszprém players were paralyzed by the thought of having the Champions League trophy secured – almost.  No one seemed to be prepared to take on responsibility anymore.

For almost 13 minutes did Veszprém not score, while Kielce made good use of this drought, eventually catching up with their opponents.

With four minutes left, Karol Bielecki drew even (28:28), and a minute later, he had an excellent chance to give his team the lead from the seven-meter spot. However, this time he was denied by Mirko Alilovic.

On the other side, Momir Ilic scored and brought Veszprém ahead by one (29:28).  And when AIlilovic saved yet another penalty – this time from Manuel Strlek – the Hungarian’s were reaching out for the trophy again.

Yet, they missed this opportunity, and with four seconds left in regulation time, Krzysztof Lijewski assured Kielce extra time with a screamer, making it 29:29.

Finally, Kielce got their first lead in the match, but it did not take Veszprém long to take it back, and by the time the two team’s changed sides again, the Hungarians had the advantage (33:32)
.
In the second half of over time, the capacity crowd at Cologne’s Lanxess arena continued to enjoy the rollercoaster ride.  At 35:34, Kielce had the upper hand once more, when Aguinagalde scored.  But his Spanish compatriot, Cristian Ugalde, called the penalty shootout equalizing the game at 35:35 from the left wing with five seconds left.

Momir Ilic was the first one up, making it 36:35 for Veszprém.
Ivan Cupic was denied by Alilovic.
Casper Marguc missedto get his shot pass by Marin Seko.
Manuel Strlek equalized to 36:36
Ivan Sliskovic made it 37:36 for Veszprém
Karol Bielecki drew even at 37:37 for Kielce
Kielce’s keeper Szmal got the better end of Mirsad Terzic’s shot
Tobias Reichmann send the ball to the back of the net; 38:37 for Kielce
Aron Palmarsson did not miss; 38:38 Veszprém
Julen Aguinagalde became the hero with his last shot of the match, making it 39:38 for Kielce

Kielce will probably be celebrating their first Champions League triumph for at least week or so – they deserve it!

For Veszprém, this loss will be a hard one to swallow. Having lead by nine goals, just to watch the big prize slip out of your hands was cruel. They summer may not be long enough to get over the disappointment.