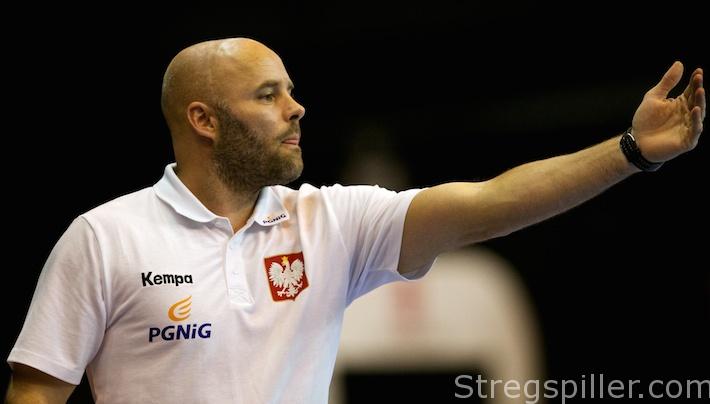 “I have drawn a line in the sand, and everyone has crossed that line, so now we can look forward,” CSM Bucuresti´s new coach tells stregspiller.com in this exclusive interview.

Many people in the handball word asked themselves – and each other – if Kim Rasmussen really gave himself a late birthday present when he signed on as new coach at CSM Bucuresti the day after his 43rd birthday.

There have been numerous reports and rumors about the way things have been going lately at the ambitious Romanian club, where fellow Dane, Mette Klit, had 18 turbulent months, before she was sacked and replaced by Rasmussen, who is also in charge of the womens national handball team of Poland along with the job at CSM.

Delayed or missing wages and players who refused to play as a consequence of not receiving timely payments have been some of the news from the club which is conceived as a municipal project.  The arrest of the mayor of Bucarest on corruption charges meant that no one was left at the top of the hierarchie for making payments.  Yet, none of it bothered Kim Rasmussen or influenced his decision to take on the job.

“I have always loved new challenges, and I see this job as an opportunity to learn about another culture and another mentality.  I also like the ambitions of the club which are to reach the FINAL4 of the Champions League and to win the Romanian league this season – and, of course, I like to work with a group of players who all belong to the international top,” Kim Rasmussen tells stregspiller.com shortly after starting in his new job.

But what makes him think that he can do better than Mette Klit and stay at the helm? His most recent adventure as a club coach – a job as coaching consultant at Macedonia’s HC Vardar in the 2014/15 season – was short lived and ended prematurely.

“Of course, it has helped a lot that by now everyone has gotten the money that was owed.  I have drawn a line in the sand, and I am happy to say that all players have crossed that line.  It means that we can look ahead now,” he says.

No need for two jobs, but…

The coaching engagement at CSM is far from being his one and only job.  In addition, Kim Rasmussen is also in charge of Poland’s national handball team and definitely not the only coach in the world holding two jobs at the same time.

Some of the trainers that perform double duties say that they need the opportunity to work with players on a daily basis as a supplement to just being national coaches, where they usually have relatively few opportunities during the course of a year to collect the athletes around them.  However, this has not been Rasmussen´s main motivation for accepting the offer at CSM Bucuresti.

“It is not that I feel the need to have a job besides being Poland’s national coach.  I like new challenges, and when I get the chance to work with players at a level like here (at Bucuresti), I do not feel that I can say no, especially as my family supported my decision wholeheartedly.  Without their support, I could not have done it,” he explains.

“Of course, it is a great advantage that those players, who are so familiar with the Scandinavian way of playing and thinking, are here.   And that does not only apply to those four, but also to our Romanian right wing Cristina Varzaru, who has played in Denmark for many years; she is also highly influenced by the Scandinavian handball culture.

Furthermore, I am harvesting the fruits of the work Mette (Klit) has done for the past year and a half.  She has gotten the players acquainted with the Scandinavian approach to playing handball and that enables me to continue along that path,” says Kim Rasmussen.

Under pressure from a tight schedule

The fact that the players are used to the same handball culture as Kim Rasmussen is, may turn out to be an additional advantage for him, as he does not have much time to put his own stamp on the team.

“In a few days, all the players will be away with their respective national teams for more than a week and already the day after their return, the Romanian league resumes.  Soon after that the Champions’ League group phase begins, so I really do not have all that much time to work with the players,” admits Rasmussen who will be away himself.  Together with the Polish national team he will be involved in qualifications matches for the European Championship in Sweden in December of next year.

However, no matter how little time he has with his new team, he will have to get them ready for the start of the Champions League on October 16 when CSM awaits the Polish champions from Selgros Lublin for their first match in Group D – a group that also includes the reigning EHF Champion Buducnost as well as the Swedish record champion IK Sävehof.

“Of course, I know Lublin very well from my job as Polish national coach.  They are a good team but obviously it’s a task we should be able to solve.  Sävehof does not have the strength it once had as they have lost several players, but they always come out with plenty of spirit and physical strength, so they should definitely be taken very serious – and then there is Buducnost, last season’s Champions League winner.  Against them anything can happen,” sounds his analysis of the group his team has been drawn to.

Looking ahead to the main round – provided CSM gets that far – the opponents are likely to be HC Vardar, Gyor Audi ETO KC and most likely the Danish champion FC Midtjylland.

For sure, CSM will encounter tough opposition not only from Buducnost during preliminary group play but also in the main round.  No wonder that Kim Rasmussen is a bit cautious about his team´s chances further down the “Champions League road”.

Although he mentioned earlier that he feels fine about management’s high expectations for the club, he becomes a bit more reserved when asked about the goal of reaching the FINAL4 of the Champions League in 2016, already.

“Right now my biggest worry is that our Swedish left back Linnea Torstensson is injured and that we do not really know when she will be fit again.  Fortunately, these things (reaching the FINAL4 or not) are not going to be decided until next year and I am sure we will be even stronger at that time.  A lot of things can happen in the meantime!” says Kim Rasmussen.