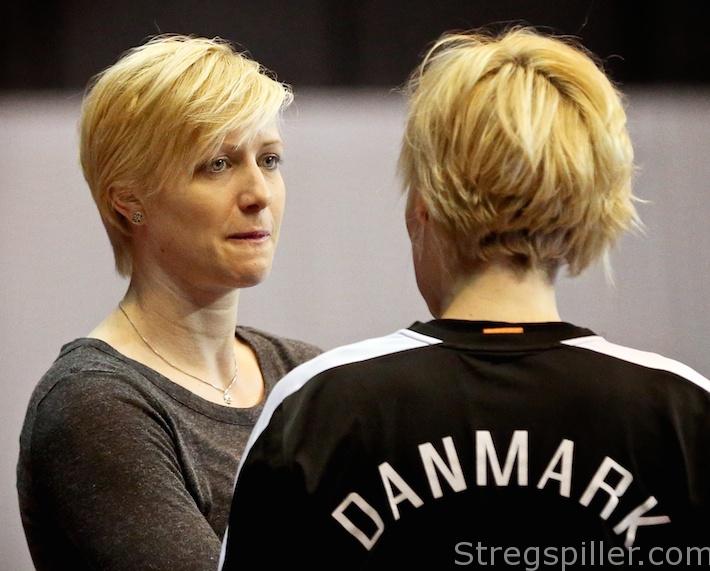 Klavs Bruun Jørgensen is the perfect coach for us!

35-year-old Rikke Skov makes no secret of the fact that Denmark´s new national coach Klavs Bruun Jørgensen has played a great role in her decision to return to the team.

Denmark´s two EURO’16 qualifiers against Turkey and Portugal last week were Rikke Skov´s first competitive matches with the national team since the London Olympics in 2012.  Actually, the 35-year-old back court player and defense specialist had said “good-bye” to the national team some time ago but this spring she found herself ready for a comeback.  In fact, Rikke accepted to be available for the European Championship in Hungary and Croatia last December already, but despite being called up by former national coach Jan Pytlick, she was later told that she would not be going after all.  At the time the decision stirred up quite some turbulence in the national handball team and following this confusing experience, few people expected to see Skov playing for Denmark ever again.  But things changed – as did the coach.

In 2014 between Christmas and New-Year’s Day, Pytlick was let go and in early January, Klavs Bruun Jørgensen was hired as new national coach for Denmark’s handball women.  Jørgensen wanted Skov in his team and Skov was ready.

“I cannot say if I would have been willing to make a comeback if Jan had continued, but as things have turned out, I think Klavs is a great solution as national team coach.  It is his first job as a women´s coach but you do not really feel that,” says Rikke Skov who is more than okay with Jørgensen´s authoritative – some would say dictatorial – style as well as his temper.

“I like his straightforward approach. He is very good in making clear how he wants things to be done and he makes no secret of what he expects from us.  This is what we have needed.  He has put an end to that “chicken run” which the women´s national team could often turn into in the past, and that is cool”, finds Rikke.

By the way, I let the pen pause in the air for a few seconds before putting the expression “chicken run” on paper.

“Are you sure I can quote you on this?” I ask. “Sure you can!  After all, we are women!” Rikke Skov responds.

Experience does not mean privileges.

Klavs Bruun Jørgensen is just as happy to have Rikke Skov in his team, as she is having him as a coach.

“She adds a lot of experience to the squad, on and off the court and this is crucial for a crew that includes so many young players.  On the court, she is a great asset in defense; combine that with her shooting skills and ability to read the game then she also qualifies as a substitute in our attack from time to time,” he says.

Even though she is the most experienced player in the Danish squad, Rikke Skov does not enjoy any particular privileges such as being involved in the coach´s decisions.

“No, Klavs does not include me in his thought process any more or less than any of the other players.   Actually, I find it OK.  He knows how he wants things to be and he is good at making it very clear to all of us,” says the experienced Viborg player who has won the Champions League three times in her career.

There is yet another reason why Rikke Skov is motivated to play under Klavs Bruun Jørgensen in the national team again.

“He is implementing a new, more vigorous style of defending which I am in total support of – also because aggressive defense is not very common in women´s handball.  I find it very stimulating,” she says.

Although Denmark won both their qualifications matches last week – 28:19 at home against Turkey and 26:21 away against Portugal – both matches could not hide the fact that there is still plenty of work ahead for Klavs Bruun and his players before his new approach to playing defense will be functioning as well as he expects.

However, Rikke Skov is fully convinced of further improvements and hungry for more success at the international top level – something she is not experiencing with her club at the moment.

“Obviously, we are not playing in the Champions League with Viborg – at least not this season.  It does give me some more time for the national squad, and of course, the wish to get the smell of international top handball once again has also been part of my decision to return to team, Denmark,” she admits.

One match at a time!

Her chance will come at the World Championship on home soil in December of this year.

Expectations in Rikke Skov & Co. won’t be as high when compared to the men´s team ahead of the European Championship in 2014, when Denmark also enjoyed home advantage.

The results of Denmark’s handball women have simply not been good enough – for quite some time – to justify the same kind of anticipation, but there is no doubt that the pressure will increase, as the tournament draws closer.

“I am well aware of it – I think we all are.  As long as such expectations are created by media only, I am sure we will be okay – we will deal with it.  It may sound like the oldest cliché in the world, but we are really just going to take one match at a time!  I know we will be asked again and again what our goal for the tournament will be, but we simply have to take it step by step, I think. Expectancies created on the outside are one thing.  Another thing is the pressure we put on ourselves.  In any event, it will be very cool to play a World Championship at home and I am really looking forward to that, as I am sure we all are!” says Rikke Skov.