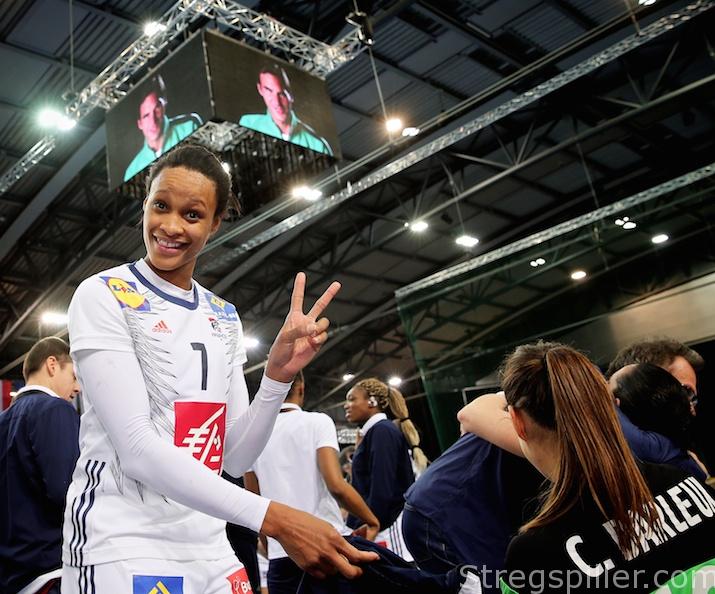 “I know they don’t really like to play against us”

It’s not the first time France has reached the final four of a big tournament, yet everyone talks about Norway and The Netherlands and also Sweden, the team that is the hot story of the World championship, in Germany, right now. But after controlling Montenegro for almost the entire quarterfinal it looks like France has to be taking seriously, also thanks to the resurgence of charismatic playmaker Allison Pineau.  I talked to her about the match and the upcoming game against Sweden.

Congratulations, Allison, you reached another semifinal. What made the difference tonight?

AP: Of course, I’m very happy that we won today – as always against Montenegro – it was quite tough. I’m very satisfied about what we showed, especially our defense was amazing. Now, I’m looking forward to the semifinal against Sweden.

From the outside it looked like you had the game under control. Did you have the same feeling on the court?

AP: I also felt that we had the match under control, as we did in the previous round. Our defense just gives you a good feeling and Amandine Leynaud had a great game as well. It was very difficult for them to find solutions when playing offense. When we were playing four against six it felt like they might have a chance to get back into the match, but we kept our calm.

You just came off an injury, but it seems you feel better day by day and it shows on the court…

AP: When you think about it, I only started playing handball three weeks ago. It’s not that much time to prepare for a World championship, considering that I didn’t play since June. But I’m very glad, I’m finding my form – especially at the right moment.

What do you expect from the Swedish team, who do you need to control in order to reach the final?

AP: The best defense of the tournament will play against the best offense of the competition, so that will be quite interesting.  I expect a great game. Of course, Isabelle Gulldén is the key player of the team, but I also see Jasmina Roberts playing a major role in the success of the team at this World championship.  They play much better than last year at home (at EURO 2016 ed.).

I guess we can expect another stellar performance from you?

AP:  Well, of course we will rely on our defense. I know they don’t really like to play against us, and I think they weren’t able to beat us for a while now. I expect another tough match.

By the way, before the beginning of the tournament, everyone talked about Norway and The Netherlands but almost nobody talked about France. Are you coming out of the shadow, at the right time?

AP:  Actually, it’s a little bit strange considering all our recent results, like in Rio or at the European championship, last year. I don’t know why people wouldn’t think about us – actually I don’t care.

Does it help you?

A: I don’t know, because we were not in the shadow last year.  Let’s say we learned from the past and what happened when we were in top shape and failed. But, I think we have more experience and also show better composure when it’s getting tough.