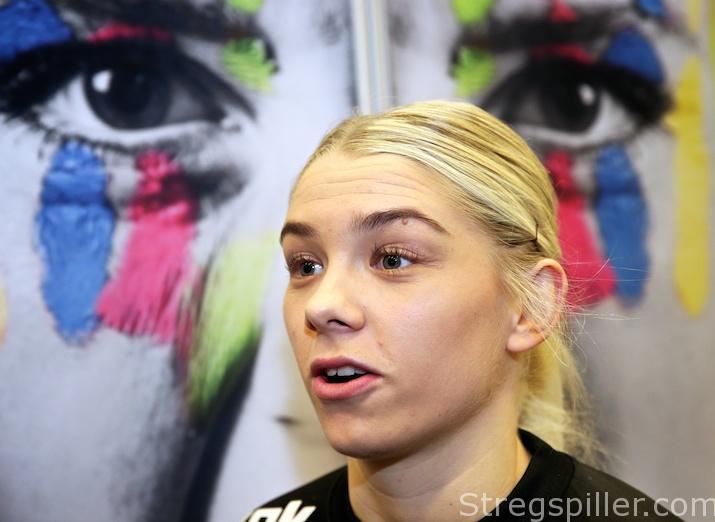 “Lack of pressure has been an advantage”

Not many people were expecting much from Denmark´s female handball team ahead of the EURO 2016.

Such lack of expectancy has reduced the pressure considerably and may have played a part in the squad´s most recent success, finds right-wing Trine Østergaard.

Being Denmark´s only real right-wing at this European championship, Trine Østergaard has been carrying a lot of responsibility, where she virtually has been playing 60 minutes in each and every one of her team´s six matches in the tournament, so far.

To her, like to the rest of the team, it was a dream come true, when they managed to qualify for the semi-final, defeating Romania 21:17.

“Of course, I had been dreaming of it, and as the competition has turned out, I think it is natural that we got this far, as we have been playing well all the way,” Trine Østergaard tells stregspiller.com.

Denmark’s Handball Federation as well as the elite organization and money provider – Team Denmark – had officially declared that a position among the top 12 best teams was the objective at the European championship, in Sweden.  However, those low expectations were not so bad for the team after all.

“The fact no one really expected a lot from us meant that there was no big pressure, and that has probably been an advantage,” finds Trine Østergaard.

“However, the expectations from the outside is one thing, our own expectation is another matter, and we obviously always want to win, when we enter the court.

“We have been good at sticking together and believing in ourselves, and this is why we are where we are now,” I think.”

When Denmark´s current national coach, Klavs Bruun Jørgensen, took over at the helm in the summer of 2015, the first adjustment he introduced was a completely new, aggressive defense modus, something that’s rarely been observed in women´s handball.

“I want to take the initiative towards our opponents,” was his motivation for this revolutionary tactical step of sorts.  Trine Østergaard admits that getting adjusted to this new way of defending has been a long process.

“It has been long as well as difficult, as this was definitely something we were not used to.

Almost everywhere in Europe, teams are practicing a flat 6-0 defense, but we are operating an offensive oriented 6-0 formation, now.

“It took time to get used to it, but now I think we are harvesting the fruits of our work, and I think it is a very big part of the reason, why we are standing in the semi-final at the European championship, now

“In all our matches, we have kept our opponents to very few goals, and this has made our road (to Gothenburg ed.) easier,” says Trine Østergaard.

A normal pay-off based on a strong defense formation would be the so-called “easy goals” you get from counter attacks, and wing players usually assume a particularly important role in this phase of the game.  However, this is not necessarily the case in the Danish team.

“The way we defend means that our opponents are often forced to miss their shot or to make other mistakes, or they are simply “tackled down”.

It also means that we do not get as many counter attacks as you might think you would get, based on a successful defense mechanism.

Furthermore, the counter attacks we do get, often start somewhere else on the court, because steals, for instance, can happen anywhere,” she explains.

Special to play against Helle Thomsen

This evening, she will be playing against her former coach.  Until only three months ago, Helle Thomsen was head coach of Østergaard´s club, FC Midtjylland.

After being let go, she became the national coach in the Netherlands, Denmark’s opponent in the first semi-final tonight.

“Of course, it will be a special experience to play against Helle, but I know that this will be forgotten as soon as the match starts.

“Then, it will be a game like any other, and she will just be the coach of our competitor.

“Of course, she knows a lot about us, but we also know a great deal about her players, as we have played either with them or against them many times in various competitions.  So in this respect, I think the conditions are fairly even,” says the 25-year-old right-wing.

Defense, goalkeeping and a disciplined attack are key

There has been a lot of speculation, especially in Danish media, whether the Dutch team will suit the Danes better than the other semi-finalist from Main Round Group 2 – France – who are also known for their strong defense and physical strength.

“I am not sure if the Dutch are a better fit for us, compared to France.  We are going to play against the Dutch, and they are the ones we focus on.

“They have some fast attacking players, and they will be a challenge to our defense,” says Trine Østergaard who has the recipe ready for defeating the Netherlands, though.

“We will need to mount a very sharp defense.  The two goalkeepers (Sandra Toft and Althea Reinhardt, ed.) will have to be at their best, and then we will have to execute a very disciplined and patient offense,” she finds.