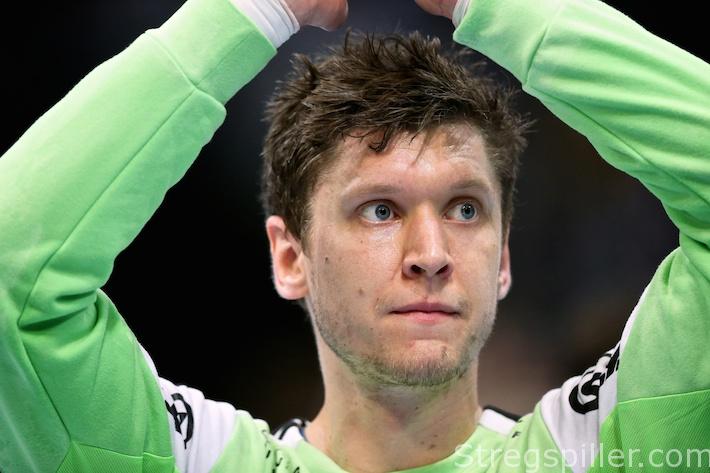 INTERVIEW – It takes more than an injured heel to stop Niklas Landin from playing the FINAL4 for the first time in his career – an event he really does not know what to expect from.

When you have finally made it to the first FINAL4 of your career, it takes more than an injured heel to keep you out of the competition – at least if you are Niklas Landin. For quite some time, the 27-year-old Kiel goalkeeper and Danish international has been bothered by a heel injury. Yet, he is ready to guard the goal of his team, when Kiel face Veszprém in the second Champions League semi-final on Saturday.

“I sustained the injury in our away game against Magdeburg a couple of weeks ago, but I can walk normally now, and I can definitely play.

“I have already played after being injured and it has really been okay, so I do not expect the injury to handicap me at the games this weekend,” he says.

As he has missed qualifying for the FINAL4 the past two years when playing for Rhein-Neckar Löwen, this will be his first “go” at the big event in the Lanxess Arena.

“I really do not know what to expect, and I am not sure, if it will be like playing at home here in Cologne.

“Obviously, we can never expect to get the kind of support we are used to receiving at Sparkassen Arena, but I hope that the German handball fans will be behind us,” says Landin who found it helpful that his coach Alfred Gislason used the last couple of Bundesliga matches to prepare for the FINAL4.

“First and foremost, it gave us the opportunity to test some alternatives in our central defense, and I am sure those experiments will prove to be useful this weekend,” he expects.

Honored to in the All Star Team

Friday, he was awarded as best goalkeeper for the EHF Champions League All Star Team 2016.

“I have only just been told by a journalist, and of course, it is a big honor for me, especially as the team is put together by the fans – by a real lot of fans,” says Niklas Landin who is finding himself in quite an unusual situation this time.

Not only because this will be his first FINAL4 – but also because he is not used to playing in a club who is considered to be the underdog. This is the role that most experts have assigned to Kiel this time.

“If it means anything, it means that we can play without pressure, but you have to remember, that we were the ones who sent Barcelona out of the competition in the quarter-finals.

“Before that, Barcelona was seen as one of the top challengers to win the Champions League, so this probably just goes to prove that you should never underestimate us.

“Maybe we are not that much of an underdog after all!

“Of course, we are in for a tough semi-final against Veszprém, but we already played two tight matches against them this season, and I am sure we will be able to do that again,” says the tall goalkeeper who missed the German championship with Rhein-Neckar Löwen last year – only to miss it again this season with Kiel.

“I do not regret my transfer from Löwen to Kiel, though!” he emphasizes.