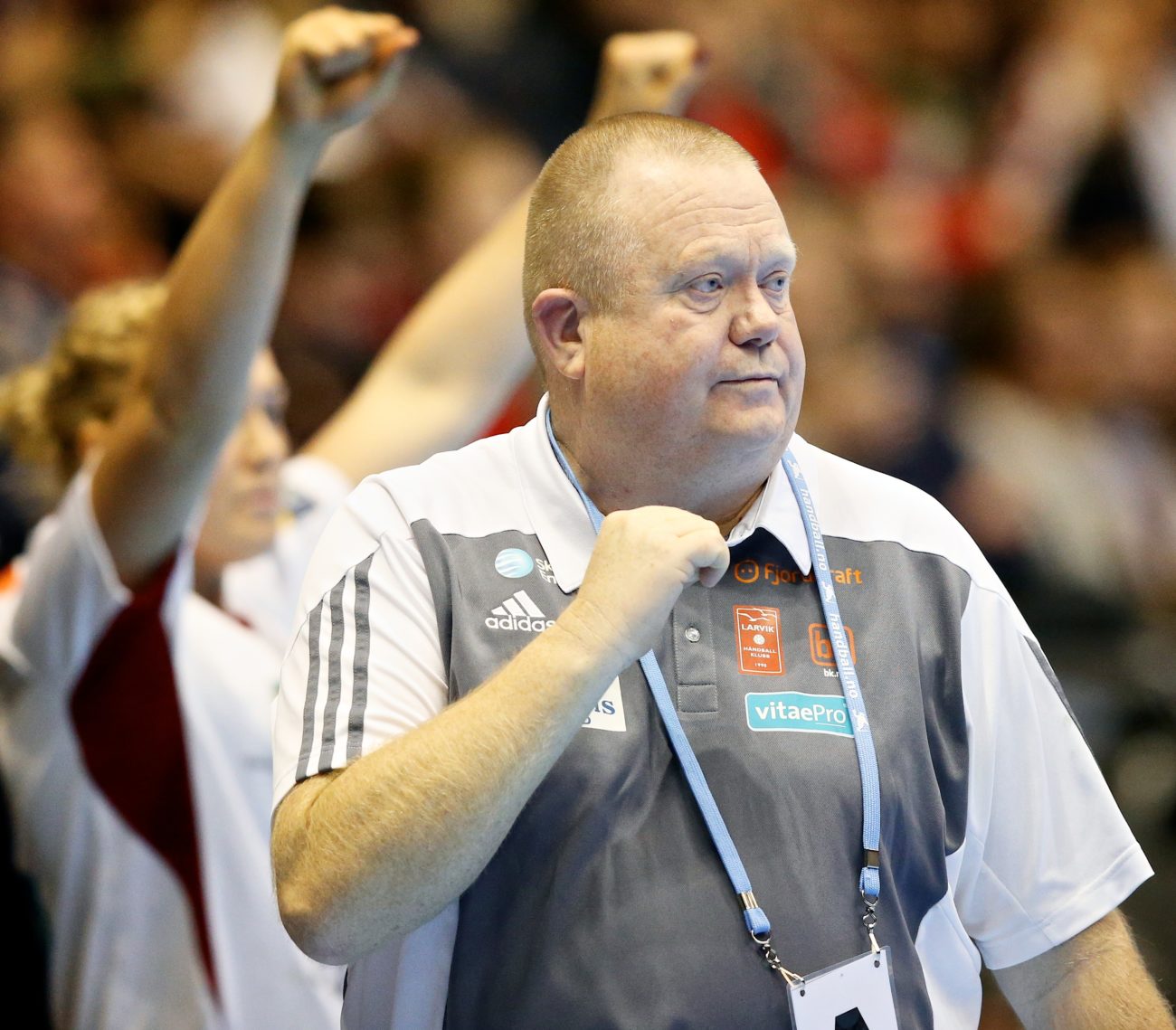 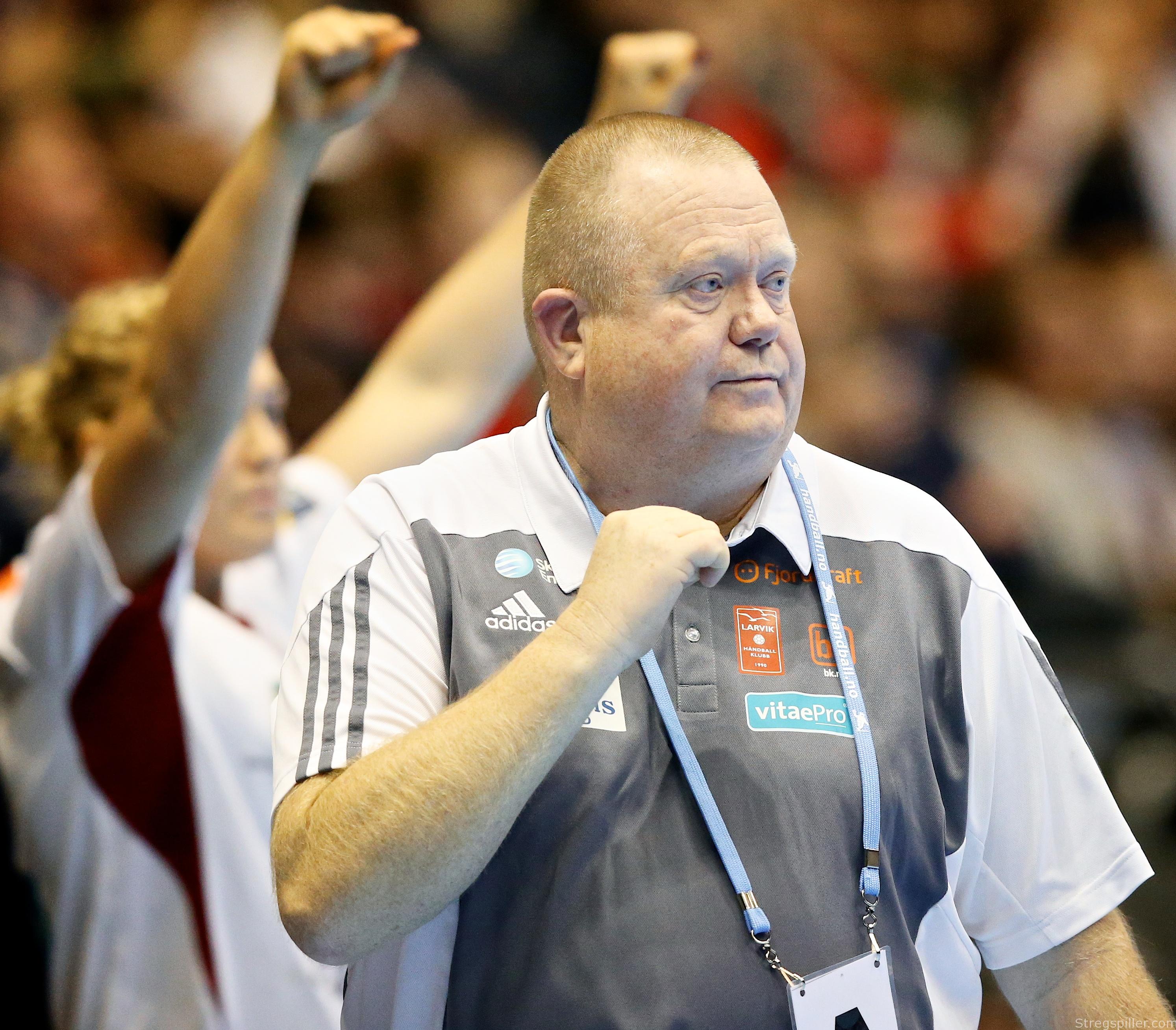 FEATURE – Larvik HK has ended the 2016/17 as Norwegian champion – once again – but a big challenge lies ahead.  Norway’s handball flagship has been dominating the league for years but ahead of next season, the club is losing 11 players.

Still, head coach Tor Odvar Moen, who has been with the club for 20 years, firmly believes in ongoing success for Norway’s most successful women´s club in sports history.

There are several European countries that are dominated by one team and often for many years.  It holds true for women´s as well as men´s handball.

On the women’s side, Buducnost have been Montenegro’s number one club and so is Vardar in Macedonia, while Hypo Niederösterreich (Austria) were untouchable for decades before adjusting to a new, more modest, reality.

And in Sweden, you don’t have to look past Sävehof.

Likewise, Larvik HK have been the number one force in Norway’s women´s handball scene for nearly two decades, winning everything, every year – the league, the championship, the cup.

“We are going to win everything again this season.

“There will be only bits and pieces left for other clubs!” head coach Tor Odvar Moen proclaimed ahead of the 2016/17 season, which ended last weekend.

In the end, his predictions proved to be correct, but it wasn’t the expected smooth ride.

Larvik did take all three titles once again, but a flood-wave of injuries hit the team in the spring of this year, almost costing play-off victory.  Not only did Larvik concede the last league game at home to Vipers Kristiansand, they also lost the first leg of the play-off final (31:30), on the road against the very same opponent before things were set straight at home, 26:20 in the return match.

But how does the future look for Norway’s handball powerhouse?

No one appears to be more qualified predicting the squad’s future than “Mr. Larvik” himself – Tor Odvar Moen.

On June 1, he will celebrate his 20th anniversary in Larvik – not always as head coach, but in almost all possible functions in and around the club one can think of.

“I am sure we will stay at the top in Norway, and we will be able to achieve results in the Champions League as well.

“We still have some very good players, and we are also getting some very capable players,” Tor Odvar Moen tells stregspiller.com.

Before he continues, let’s take a look who is “in” and who is “out”.  No less than 11 players are leaving the organization.

The two goalkeepers Sandra Toft and Alma Hasanic, left-wing Sanna Solberg, the left-backs Alina Wojtas and Lena Løwe as well as the two line players Marit Malm Frafjord and Vilde Ingeborg Johansen and right-back Amanda Kurtovic are all leaving for other clubs, in Norway or abroad.

At the same time, key players such as Gro and Anja Hammerseng-Edin decided to end their careers and so did defense specialist, Karoline Dyhre Breivang.

At least one of them will maintain another role in the club, as Gro Hammerseng-Eding stays on as a member of the board of directors.

On the positive side, eight new players have been signed as replacements for those who left or stopped.

Goalkeeper Guro Rundbråten, center-back Emilie Christensen and line player Martine Wolff will be joining from league rival Glassverket who had to set all players free due to financial problems.

Left-back Cassandra Tollbring – older sister of Swedish international Jerry Tollbring – is leaving Challenge Cup finalist Höör (Sweden), while Maria Hjertner from Byåsen and Mari Finstad (Gjøvik) have been signed for the right back position, and Mathilde Toft from Aker can play right-wing as well as right-back.

Finally, Brazilian international, Tamires Morena Lima, will be arriving from French Cercle Dijon and joining Martine Wolff on the line.

“I am sure these players will form a very strong team over time.

“Of course, it will take some time to make the squad click, and I do admit that we will be missing some experience when compared with the team we had in the previous seasons.

“However, I see it as a big advantage that we directly qualified for the Champions League, as we will gain plenty of valuable experience in the group matches,” finds Tor Odvar Moen.

“Our financial situation is better than it has been for a very long time.

“We are still facing some challenges, but those are not nearly as serious as they once were.

“We have things under control and we know what needs to be done,” says Tor Odvar Moen who confirms that the club’s budget had to be reduced considerably because of financial problems.

“However, even when considering the budget we had in the past two years, we could not have signed players on the same level, as the ones who are saying good-bye, now.

“No clubs in Western Europe can.  Such players are in the Balkan or in other parts of Eastern Europe,” he says.

Despite the financial challenges and the many changes in the team’s roster, Larvik maintain the same objectives as before.

The club wants to be the best in Norway and at least reach the quarter-final of the Champions League every year.

Tor Odvar Moen will not guarantee that his new team can fulfill the stated goals– at least not in the first season.

“These are our goals.

“You do not always reach your objectives, but of course, we will strive to get there, and I do believe that we stay in the top in Norway and also go far in the Champions League.

“As I said, we will be missing some experience, but experience is something our players will gain along the way,” he says.

Neither engaged, nor married to Larvik

As mentioned above, he will celebrate his 20th anniversary in Larvik, on June 1, 2017.

“It has mainly been (the club’s ed.) ambitions that made me stay that long.

“For many years, Larvik has been the strongest and most innovative club in Norwegian handball, and I found it exciting to be part of that.

“We could attract the best players in Norway and from several other leagues, including the Danish league, and we managed to win the Champions League in 2011.

“It really was a fantastic time, but now the best players play in the Balkan, and we are facing a new reality.”

Still, Tor Odvar chose to stay on, although he claims that he is neither engaged not married to Larvik.

“I am not under a normal contract, but employed in a way that I can leave on three months´ notice.

“I could easily see myself in another organization, maybe as coach in a foreign club.

“Actually, I though a lot about the future this winter but for now, I have decided to stay in Larvik.

“I also see an exciting challenge to build a new Larvik team for the future.  That’s the main reason why I stayed,” says Tor Odvar Moen.