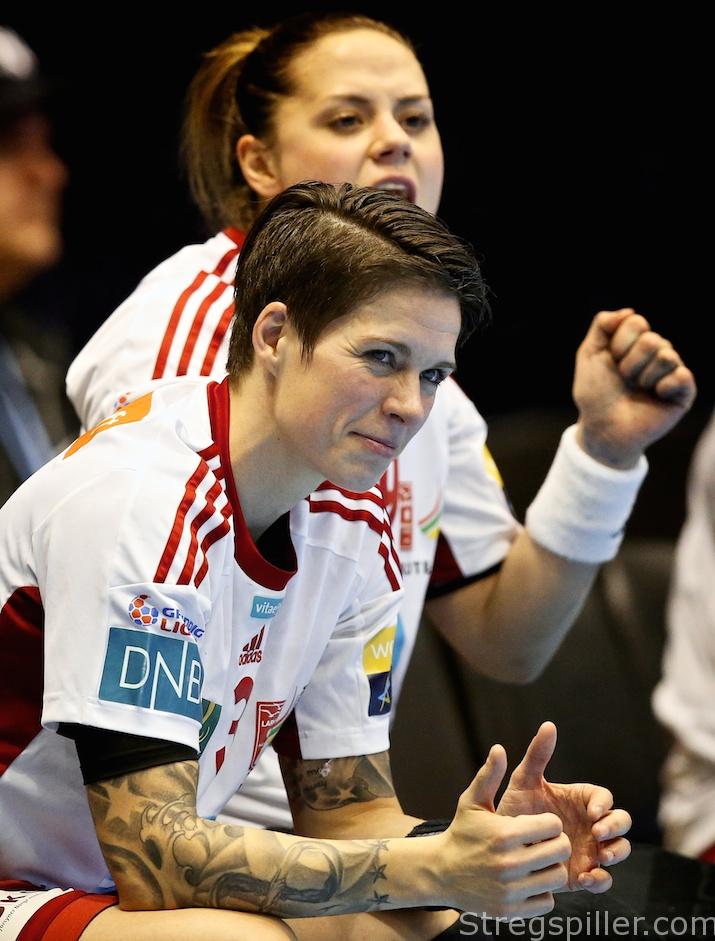 MATCH OF THE WEEK – GROUP 2

For the second time this season did Larvik lose a three-goal lead in the last minutes of a road game, this time they drew in Gyor – 27:27.

A steal by Yvette Broch with 21 seconds left saved a fortunate point for Gyor.

Gyor were on top of the group with 10 points, while FC Midtjylland´s win against Krim on Saturday had sent Larvik down to fourth position with seven points.

The match was a reunion between Gyor’s right-back Nora Mørk and her former club as well as a contest between her and Amanda Kurtocvic, probably the two best right-backs in the world right now.

Larvik were still missing injured left-wing Sanna Solberg – who will be leaving the club for Team Esbjerg (Denmark) after the season – and Polish left-back Alina Wojtas.

Intercepting a pass from Tine Stange with 21 seconds left, Yette Broch secured Gyor the draw, as the host was teetering on the edge of a sensational defeat.

Larvik will leave Gyor with mixed feelings.  Not many teams take any points in Audi Arena, and before the match, Larvik would have been content with a draw.

However, as they were leading 27:24 with less than three minutes left on the game clock, they cannot be entirely satisfied as it was the second time this season that they surrendered a three-goal advantage in the Champions League.

First a 26:26 draw against CSM Bucuresti, in Romania, a fortnight ago.  Today’s 17th turnover in the match, with 21 seconds to play, turned the result into a “bitter sweet” experience for Larvik.

From the start, Gyor had enormous problems with Larvik’s defense and a brilliant Sandra Toft behind it.

It took almost seven minutes before Eduarda Amorim scored the first goal for the home team, reducing the score 2:1.

Gyor´s challenges in offense continued, as they were able to score only two goals in the first 15 minutes.

Larvik made use of the Hungarian drought to take a 6:2 lead, and as soon as Gyor caught up (6:6), the visitors built another four-goal advantage at 11:7.

Gyor was able to cut the deficit ahead of the second half, scoring the last two goals before the buzzer sounded, reducing Toft´s saving percentage to 50!

Gyor´s offensive efforts, which were slow and lacked creativity in the first half, improved considerably.   For a moment it looked as if they could turn the game around.

The Hungarians caught up at 11:11 and six and a half minutes into the second half, 20-year-old left-wing Szidonia Puhalak gave the home team their first lead in the match – 13:12.

As a consequence, Sandra Toft´s saving percentage dropped to 34.  Still Gyor were not able to shake off their opponent.

With 10 minutes left to play, Linn-Kristin Riegelhuth Koren brought Larvik back into the lead (21:20), the Norwegians had the upper hand once again.

With barely three minutes on the game clock, Gro Hammerseng-Edin handed the visitors a, what looked like,  comfortable three-goal advantage – 27:24.  A Norwegian victory seemed inevitable.

However, two quick goals from Gyor brought Groot & Co back within striking distance and the rest is history.  Broch’s steal left Gyor with one point.

You might say that Larvik deserved to win but you may also argue that when you are not able to hold on to a three-goal lead with under three minutes left to play, you earn exactly what you get.

With 10 goals and flawless penalty shooting, the award goes to Amanda Kurtovi.  She also won the direct contest with Nora Mørk who scored seven times for Gyor.

After a stellar first half, Sandra Toft was the favorite for the honors, but being somewhat less of a factor after the break, she comes in as a close second behind Kurtovic.

It must be the superbly executed Kempa trick in the 28th minute, when Amanda Kurtovic found a high-flying Thea Mørk with a long pass from right-back position.  Thea converted in spectacular fashion, giving her teammates a 11:7 lead.

The more than 5,000 spectators in Audi Arena are always a pleasure to watch and hear, but for once not even their noisy support could earn Gyor the victory.

Gyor are still leading the group, now on 11 points.

Larvik shares second place with FC Midtjylland, both teams are on eight points.  The Champions League will take a two-week break, before Larvik receives CSM Bucuresti, while Gyor will visit Krim.

In the other Sunday match in Group 2, CSM Bucuresti won 33:25 at home, against Team Esbjerg.