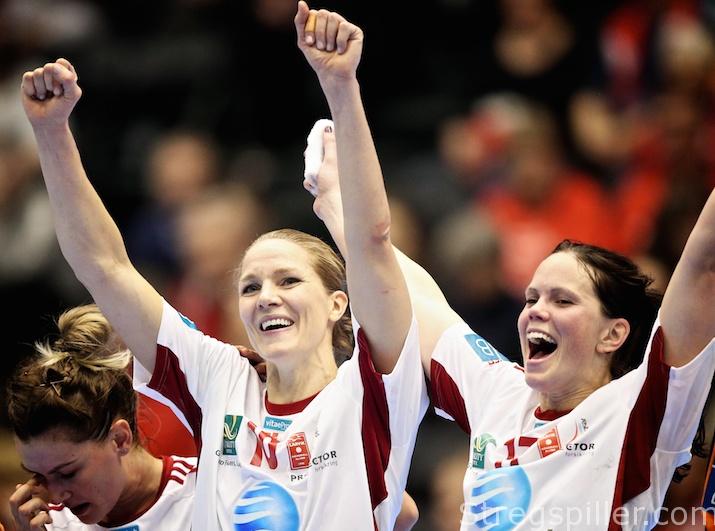 MATCH OF THE WEEK – GROUP 2 – Larvik left no doubt who is the leading team in Scandinavia right now, as they won the derby against FC Midtjylland in decisive fashion – 28:24.

While Larvik are certain to finish second, Midtjylland may have to worry about a quarter-final berth, all of a sudden.

Larvik with 10 points were assured of the quarter-finals already. Midtjylland in third position with eight points, needed a draw to also reach the next phase.

In case of a victory, Larvik could still maintain hope for winning the group, if Gyor would lose at home against Team Esbjerg.

As Larvik won the first match against Midtjylland (24:22), the Danish champions needed at least a three-goal margin in their favor, to pass the Norwegians and to take over second position.

A strong defense, a superb Sandra Toft in goal and an outstanding performance of Tine Stange at both ends of the court were the key reasons why Larvik succeeded in the end.

Actually, the final result does not properly reflect the difference between the two teams in this match. Larvik were the far better team, even though a more aggressive Midtjylland defense in the second half put a few obstacles in the way of the Norwegian champion.

Tine Stange was not the player that Midtjylland had prepared for.  The 32-year-old left-back took the home team by surprise, as she scored Larvik´s first two goals, making it 2:1 for the visitors.

When the Midtjylland began defending her more seriously, she showed her impressive skills assisting other players.

Her cooperation with Marit Malm Frafjord on the line and Thea Mørk on left-wing was especially noteworthy. Before the half was over she added three more goals.

Behind a strong Larvik defense, Sandra Toft soon became another essential factor after a shaky start. However, the Larvik’s life was made easy because of a rather tame Midtjylland attack.

Generally speaking the Danish offense was lacking patience, and too many wrong decisions were taken too quickly.

On the defensive end, Midtjylland began the second half more forcefully.

Add to it a more aggressive approach when in attack and an improving Sabine Englert in goal. At least to a certain extent the improved effort paid off.

The Danes limited Larvik to 10 goals in the second half compared to 18 before the break – still, it was not enough to even create doubt about the final result.

Midtjylland reduced the deficit to four goals a couple of times, but that was as close as they got. Quickly, Larvik went up by six again (23:17), and at 26:19, the game was decided.

In the last minutes, Midtjylland moved closer again, but it was only of cosmetic value, at this point.

“We had agreed to run a lot, and we succeeded really well with that, so fortunately, the game never got exciting”

“When you play abroad and play a Danish team, you certainly do not want to lose – so personally, I am particularly satisfied.”

“Our defense should be our strongest weapon and our base, and still, we let in 18 goals in the first half alone.

“That is not good enough, and there are definitely some things in our game we need to work on.”

In a close race with Sandra Toft and Marit Malm Frafjord, the award goes to Tine Stange.

The veteran managed an enormous work schedule at both ends of the court, and she played a particularly important role in Larvik´s fine start to the game.

Reunion of the Match

Larvik’s playmaker Gro Hammerseng Edin got enthusiastic and deserved ovations from the spectators before the match in the arena, where she played for eight years before joining Larvik.

It was depressing and disappointing to see a nearly half empty arena in such an important Scandinavian derby. However, credit must be given to the fifty plus Larvik fans that supported their team enthusiastically all the way. They dominated the atmosphere in the arena.

Larvik are assured of second position in their group, meaning they will enjoy home court advantage in the second leg of their quarter-final match.

In the unlikely case that Gyor loses at home against Esbjerg, on Sunday, even first place will be within reach for the Norwegians.

Midtjylland can still afford a loss of up to eight goals on the road against Krim, next Saturday and still proceed to the quarter-finals.