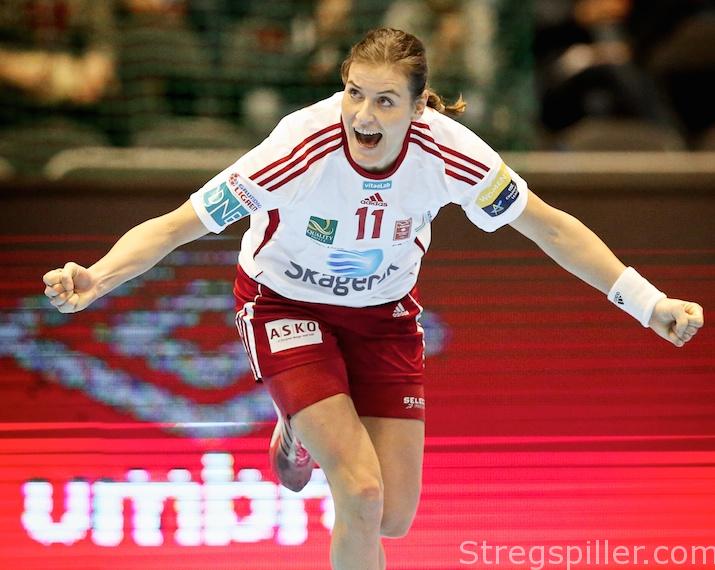 Larvik’s big step towards the quarter-final

MATCH OF THE WEEK – GROUP 2 – Larvik took a huge step towards the quarter-final, defeating the ruling Champions League winners, CSM Bucuresti, by two goals in “Boligmappa Arena”, in a match, where the teams took turns in dominating the game.

The match was an important one for both parties with regards to qualifying for the quarter-finals.  Larvik being third in the group (8 points), followed by CSM in fourth position (7 points).

CSM were lucky to secure a 26:26 at home in the first match, as Larvik were leading 26:23 with three minutes left.

Larvik were still missing the injured left-wing Sanna Solberg and left-back Alina Wojtas, while CSM could welcome veteran Paula Ungureanu back in goal.

Larvik caught up with a four-goal deficit in the first half, but after the break, in a reversal of fortune, CSM almost closed a six-goal Larvik advantage.

A successful shot from Gro Hammerseng and a save by Sandra Toft sealed a Larvik win.  The trio of Kurtovic, Mørk and Frafjord put their names on 24 of the home team´s 35 goals.

CSM´s experienced goalkeeper duo, Ungureanu and Grubisic, experienced an evening they will want to forget.

CSM got off to the far better start, where Linnea Torstensson was on fire.  She scored the visitors´ first two goals, three out of their first five and four of their first eight.

By then, Larvik defense had adjusted and she only scored one more time more in the rest of the match.

CSM went up 4:1, 8:5 and 10:6, but an improving Sandra Toft in Larvik’s goal and several technical mistakes by the Romanians brought the Norwegian champion back into the game.

Neither Paula Ungureanu nor Jelena Grubisic got in the way of Larvik’s shots, and slowly but surely the home team cut the deficit. Eighteen minutes into the game, Linn-Kristin Riegelhuth Koren scored the equalizer (11:11) for the first time.

In the next minutes, in a very high-scoring first half neither club could pull away.  With less than three minutes left, Thea Mørk arranged for Larvik’s first lead in the match at 17:16 but by the time the teams changed sides, the score was dead even.

The first minutes belonged to Larvik.  It all started with Kristine Breistøl scoring her two goals of the match, as she made it 19:18 and 20:18 for the host.

Four straight CSM goals reduced the score to two (31:29) and when Gnonsiane Niombla scored on a penalty shot with less than three minutes left (34:33), the game at “Boligmappa Arena” was on the line.

However, it is in such tense situations when experience shows its worth.  With two minutes left, Gro Hammerseng Edin made it 35:33 and calmed the nerves of the home crowd.

Surprisingly, Sandra Toft´s saving percentage only amounted to 23.  If she did not have many saves, she surely had some that decided the match in favor of Larvik.

The most important one she performed in the 58th minute, denying Linnea Torstensson, while sealing Larvik’s victory.

Thea Mørk was awarded Player of the Match in the arena.  No doubt Nora Mørk´s twin sister was a worthy candidate, scoring seven goals on eight attempts from left wing and converting on fast breaks.

However, my vote goes to Amanda Kurtovic.  Larvik´s right-back did not only become top scorer with eight goals.
She was tasked with an enormous workload and kept getting the attention of CSM’s defense, making room for her teammates.

I was writing a note to myself, as a reminder of a Kempa trick from Kurtovic to the in-flying Thea Mørk making it 18:17 for Larvik in the last minute of the first half.

However, only a few seconds later, CSM executed an even better Kempa, when Aurelia Bradeanu found an airborne Carmen Martin who sent the ball across the goal line making it 18:18.

Before Larvik´s previous home game, head coach Tor Odvar Moen made an appeal to the local fans, to support their team with some more noise and energy.

It seemed as if 2,277 spectators on this Saturday evening remembered his words.  The atmosphere has rarely been better inside Larvik’s arena.  For the record, a relatively large group of Romanian handball fans contributed as well.

With 10 points and two matches left, Larvik are as close to the quarter-finals as one can get.  They are three points ahead of CSM and have the advantage of having won the potential tie-breaking contest with CSM.

CSM, on the other hand, will be better off winning their two remaining matches, at home against Krim and on the road against Team Esbjerg, to make sure of reaching the knockout phase.

In the other match on Saturday, Gyor did what was expected, succeeding 34:17 in Ljubljana against Krim.
Esbjerg and FC Midtjylland met in the Danish derby on Sunday.