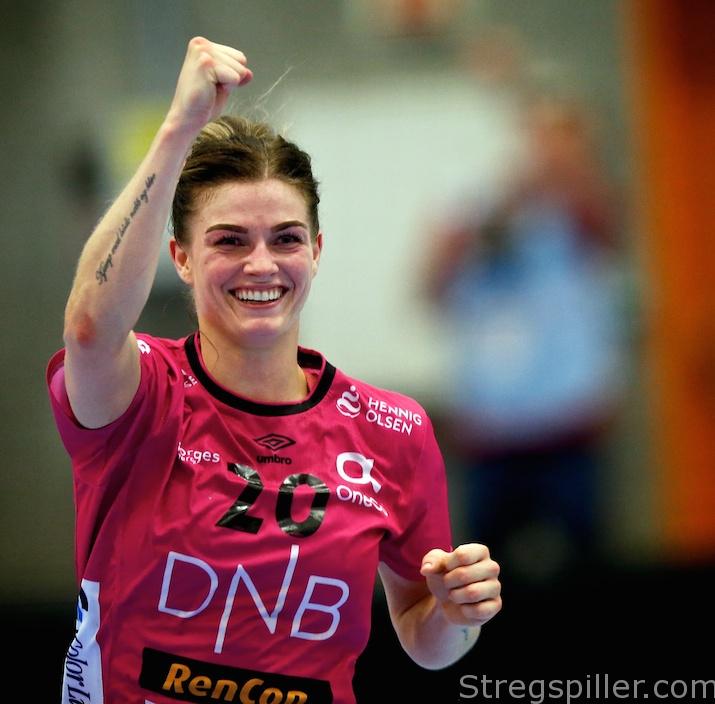 INTERVIEW – In a week from now, Vipers Kristiansand may have qualified for their very first EHF Champions League FINAL4 if the Norwegian champions can defeat Buducnost in the quarter-finals.

To one of Vipers´ key players, Jeanett Kristiansen, it may also be the last chance to reach the FINAL4 – or even to play the Champions League, at least for a while.

Vipers Kristiansand may write handball history over next two weekends.

If the Norwegian champions can eliminate Buducnost in the EHF  Champions League quarter-finals -the first leg is played on Sunday evening in Podgorica – they will head to Budapest to compete in their first FINAL4 ever.

Over the summer, Jeanett Kristiansen will be leaving for Danish Herning-Ikast Handbold, where she will be following in the footsteps of her older sister, Veronica, who played there before joining Györ for the 2018/19 season. Back then, the club was named FC Midtjylland.

After joining Herning-Ikast, Jeanett Kristiansen is not likely to get the chance to play the prestigious FINAL4 any time soon – or even play in the Champions League, for that matter.

So, why did she take the step?

“I have been feeling for some time that I need some new challenges in my handball life, and to become part of building a new and strong team in Herning-Ikast could be just what I desire,” she explains to stregspiller.com.

“I will bring all my experience from Vipers and from the Champions League to Herning-Ikast.

“Reaching a higher level will take lots of hard work, but I am sure all the girls in Herning-Ikast are willing invest in it.

“My goal is to take them a step higher than they were this year and I want to be part of making them number one in Danish handball. My objective is to play for medals and only gold is good enough!

“So, who says I won’t be back in the Champions League soon?  You may see Herning-Ikast return sooner than you think,” sounds the optimistic expectation from Kristiansen, who will be joining fellow Norwegians Tonje Løseth and Helene Fauske in the Central Jutland club.

Welcoming the return of Jaukovic

Before her transition to Denmark, however, it’ll be all about qualifying for a historic FINAL4 with Vipers. Jeanett Kristiansen is optimistic and looks forward.

“I think our chances are really good. Of course, we will have to invest one hundred per cent and I realize that it will be tough, but we also know that we are a good team, and that we have beaten the very best on the road,” she says before the first match at “Morraca” arena, in Podgorica, on Sunday evening.

Buducnost will miss playmaker, Milena Rajcevic, while another vital backcourt player and defender, Durdina Jaukovic, is back.

“It’s just fine that Jaukovic is back as it will make the matches more exciting.

“We still have to do our absolute best and fortunately the matter will be be decided over the course of two matches,” confirms the versatile player, who occupies the left wing just as well as the left back position.

Before it all begins, it’s hard to argue that Buducnost have much more Champions League experience than Vipers.

The Montenegrin club has attended the FINAL4 four times already and won the Champions League twice, while Vipers made it to the quarterfinal for the very first time, in their second Champions League year.

Such facts don’t worry Kristiansen, though.

“I don’t think such circumstances will be significant. We have many experienced players as well and usually we raise to the occasion in these important matches.

“Buducnost can only stop us if they are considerably better than us and if we are not at one hundred per cent, which I really hope we will be.

“This (the quarterfinal ed.) is what we have worked for every day – to play against the best and to fight for a FINAL4 ticket. Now, we have made it to the quarterfinal and that’s extremely cool. Now, we want more.

“I have great confidence in my team – every player really wants to go to the FINAL4.  So, I expect a couple of thrilling and fun games! I am so proud of the entire team,” she says.

Reaching the FINAL4 and possibly competing against her sister Veronica once more, would be the perfect way for Jeanett Kristiansen to end her time in Kristiansand, which lasted three years.

“Of course, this would be a great finish to my time here.

“There’s no doubt that I am going to miss Vipers as I am fond of living in Sørlandet (part of Southern Norway, ed.) – I have met a lot of fine people in Kristiansand.

“Obviously, I will also miss playing the Champions League – at least initially.

“But, as I told you before, who says that I am not going to play in the Champions League again?  You may see me back with Herning-Ikast sooner than you expect!

“After all, I am only 26 years old. You will see me in the Champions League again, one way or the other,” promises Jeanett Kristiansen.