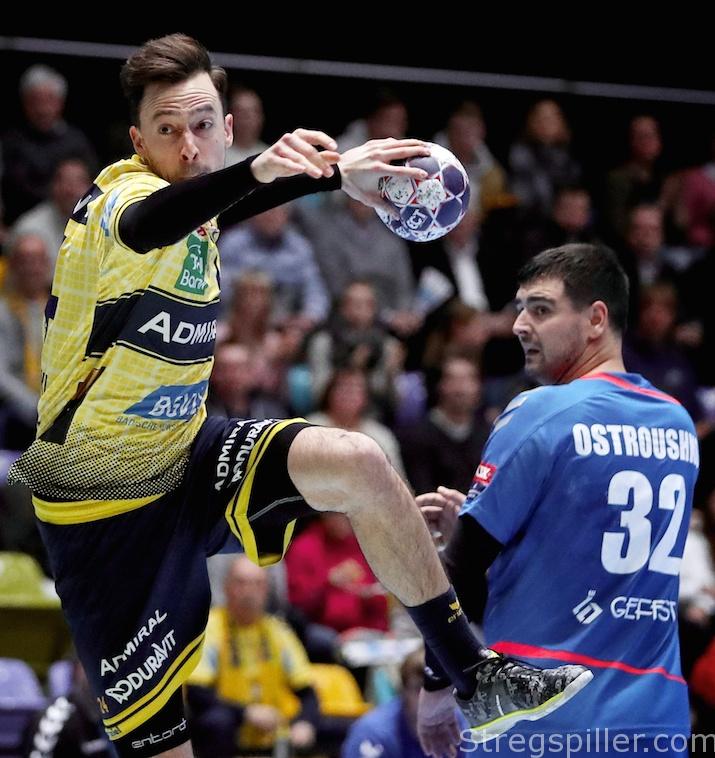 Not a lot of people thought that Rhein-Neckar Löwen would be able to defend their 2016 league title, but the team from Mannheim did so in impressive fashion. But after losing a key players like Uwe Gensheimer (2016), and Kim Ekdahl du Rietz (2017) future success may be more difficult to achieve. I talked to right-wing Patrick Groetzki about the challenges ahead.

Looking back at last year, how do you rate this very successful season?

PG: It already feels so long ago, but it was just amazing.  Of course you always start with some expectations, but it was outstanding to repeat the success of the year before.  Many people didn’t believe we could do it again – it  may have helped us a little bit in the end.

So, you were not convinced either?

PG: Sure, we were. We wanted to defend the title and focused on it.  I think it all worked out to our advantage.

There were some question marks prior to last season, as Uwe Gensheimer had left the club.  Andy Schmid and you had to carry more of a load than before and I think you made a step forward – do you agree?

PG: I agree with you for the most part.  We probably played better handball in the year before.  Right before Christmas we had some sub par performances, but we still succeeded in these matches.  We weren’t satisfied, but following the World championship in January we were able to find the old rhythm.  I think, when talking about “carrying the load”, we have to mention Alexander Petterson, who is now 37 years old.  And obviously Gudjon Valur Sigurdsson – he had an amazing shooting percentage.  What he did in his first year back with the team was phenomenal.  We also benefited from a great goalkeeping tandem, a fantastic atmosphere within the team and the fact that our back-court players were already playing together for five years.  All of it was a big plus for us.

Still, Kim Ekdahl du Rietz called your team a bunch of losers after you were eliminated from the Champions League.  Did this statement make any sense?

PG: I don’t think he really meant it like it came across.  He probably was very frustrated and he may have referred to the (German Cup ed.) FINAL 4, in Hamburg.  But I guess he changed his mind after all.

You got some new players, it will be quite a challenge to repeat the success in 2018?

PG: Yes, it will be. We hope that Mads Mensah will take a step forward – additional time on the court should make him feel more comfortable.  Our game will change a little bit because Momir Rnic is more of a shooter – he has an incredible hard shot, as he already showed during pre-season.  He can be a real weapon for us, but we have to use him properly.  But I wouldn’t call it too much of a change when we have to integrate only one new player in the starting line-up. Maybe other teams talk about it all the time but we don’t.  It will be a challenge to replace Kim, but we have some interesting new additions, Jerry Tollbring, for example.  I can’t even remember him missing a shot during pre-season.  He will be a great player helping us going forward.

After winning the league title twice has the focus changed a bit more towards the Champions League?

PG: No, not really.  But after being eliminated in the round of Last-16 three years in a row it would be nice to make it to the quarterfinal or even the FINAL4.  After all the matches in the group stage, and putting in a lot of energy, it’s a shame to lose the games that really matter.  We want to go further this year.

Do you think that’s possible while trying to win the German championship again?

PG: I think so.  Last year we did a great job of resting some players in the Champions League.  Our starters had more energy in the Bundesliga, because they didn’t play twice a week.  It’s not only good for your body, but for your mind as well.  In January, I really felt the difference, because by that time you usually have played around 40 games. But this time it were “only” 32 matches or so.  You do feel the difference.  So, I believe it’s possible to win the league title and go far in the Champions League.  The new rule, allowing 16 players on the roster, will also help us resting more players in games that we are winning by a high margin.