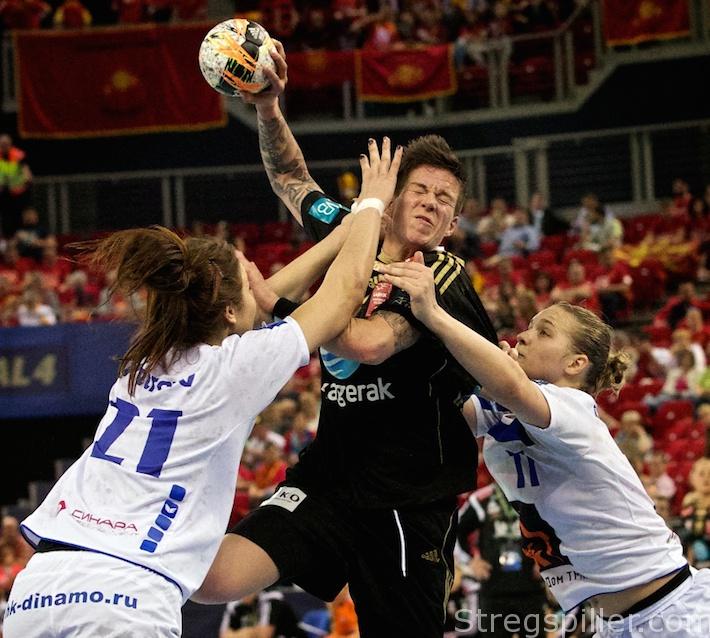 Laszlo Papp was a Hungarian boxing icon who became the first boxer in Olympic history to win three consecutive Olympic gold medals between 1948 – 1956.  It would be another 20 years before Teofilo Stevenson (Cuba) would accomplish the same outstanding result.  Laszlo died in 2003 and today his name is honoring Budapest’s multipurpose sport arena, hosting site of the 2015 Women’s EHF Champions League Final 4 – a handball tournament.

Following the early exit of defending champion, Gyor Audi ETO in the quarter-final against ZRK Vardar, there was a buzz around town in anticipation of the “heavy-weight fight” between the team from Macedonia and neighbor, Buducnost Podgorica.

The other semi-final between Larvik HK and Dinamo Sinara Volgograd, considered by most spectators the “undercard” event, appeared to be a shoo-in for the club from Norway’s Vestfold community.  Every metric that one could consider, spoke in favor of Gro Hammerseng-Edin + Co.  There was the 7-2 winning record against Volgograd since 2005 as well as this year’s perfect Champions League stats of zero losses that only added to Ole Gjekstad’s team having to assume the role of favorite in the first semi-final match.  To make a long story short – Larvik lived up to the elevated expectations of its fans of which a good number had found their way to the Hungarian capital, in support of their team.  The game ended at 31:22 in favor of Larvik. Linn-Kristin Riegelhuth Koren led all scorers with nine goals and continued where she left off in December of last year, when Norway collected its sixth European championship, at the same location.  While the team from Volgograd had pulled off a number of surprise wins during the 2014/15 Champions League season, in the second half of the encounter, Anna Kochetova and her teammates had to pay tribute to the relentless pace of the Norwegian champion.

Larvik maintained its immaculate record and seemed to be well positioned to take the final step in the competition.

Saturday’s second game brought the re-match of last year’s semi-final between ZRK Vardar and Montenegro’s handball powerhouse, Buducnost Podgorica.  But unlike 12 months ago, Katarina Bulatovic + Co. did not need an over-time session to decide the game in their favor 27:17.  After 30 minutes coach Adzic’s team was in front by five goals and midway into the second half, the competition was effectively over.  Vardar’s body language spoke louder then any words could do and the offensive efforts of the Macedonian All-Star team were reflective of their discouraged state-of-mind.  Eventually, Buducnost extended the lead to ten goals, allowing Dragan Adzic the opportunity, although rarely used, of sending Camilla Dalby and Jelena Despotovic on the floor while resting some of his starters.  The match never lived up to the hype that had built up in the weeks since Vardar’s low point – the Champions League match in Volgograd earlier in the year.  All the invigorating elements that “consulting coach” Jan Pytlick had instilled since that dismal performance in Russia had vanished.  Goalkeeper Clara Woltering delivered, what turned out to be the first part of a brilliant performance that would earn her the MVP award, eventually.  Milena Knezevic put one of her best performances on display, leading her team to a victory that was neither in doubt nor in jeopardy as the game clock ticked away.  After the final whistle, Vardar’s right-winger Jovanka Radicevic summed it up best by stating that “we did nothing today; we couldn’t do anything that we had agreed on, what we had talked about.”

24 hours later the squad of head coach Indira Kastratovic was able to redeem itself from the uninspired performance of the previous day, winning the match for third place against Dinamo Volgograd 28:26.  Yet, only after the red-card ejection of Olga Akopian in the second half was Vardar able to deliver the knock-out blow.

At last, the stage was ready and set for the EHF’s Champions League final match of the 2014/15 season.  Showtime at the “House of Laszlo Papp”.  Larvik HK vs. Buducnost Podgorica. Gjekstad vs. Adzic. Speed vs. Power.  Even the arena’s announcer got carried away in the spirit of Hungary’s former boxing idol, advising the crowd “to get ready to rumble.”  Michael Buffer, the famous U.S. ring announcer for boxing and wrestling matches, delivering his trademarked catchphrase, appeared to be the only one missing.

It would not be long before Buducnost would throw its first punches during the opening phase of the “fight”, setting the tone of what would turn into a first half that came close to being a nightmare from the perspective of the team from Norway.

After Marit Malm Frafjord missed on converting a 100% chance from the line, it quickly became clear that Larvik’s offensive efforts would turn into a painful experience whenever moving towards the six-meter line.  Anja Hammerseng-Edin was the main recipient of a number of targeted blows against neck and face.  “It’s within Buducnost’s DNA”, as Camilla Dalby simply explained after the game.  Five minutes into the match the team from Montenegro was leading 4:0.  Unlike the previous day, Katarina Bulatovic was on fire, scoring six of her seven goals in the first half.  Most of them textbook bullet shots delivered from beyond the 9-meter perimeter.  Larvik was struggling on both ends of the court trying to regain composure.  Not every failed attack could be explained by Buducnost’s aggressive defense.  After the first round of play, Larvik had amassed 10 turnovers in addition to 3 technical faults while Clara Woltering’s save rate had reached the 50% mark.   At 8:14 in favor of Dragan Adzic’s team, the two squads changed sides.

The opening minutes of the second half almost appeared to be a mirror image of the first 30 minutes.  Buducnost scored a couple goals while being a woman down and on the opposite end of the floor Marit Malm Frafjord could not convert on one of the few fast-break opportunities.  Her close range shot was saved in spectacular fashion by Woltering.  Buducnost extended the score 20:11 – game over.  Not so – what followed was perhaps Larvik’s best phase during the entire match.  Led by Anja Hammerseng-Edin and Nora Mork, Larvik worked itself back into the game.  All of a sudden Buducnost’s central defense looked vulnerable with Cvijic and Lazovic grappling to close increasingly wider gaps.  It was during this period when the two individuals that did not wear the colors of either one of the two teams drew most of the attention – the referees Peter Horvath and Balazs Marton.

From the get-go, the two men from Hungary had their own issues in finding and applying an appropriate line of judgment. Between minutes 12 to 22 such deficiencies were prominently exposed when two vicious and deliberate fouls committed by Dragana Cvijic and Milena Knezevic did not result in their expulsion from the game.  After serving a two-minutes penalty both players returned to the court and the rest is history.  When the final whistle blew, Katarina Bulatovic & Co. had established a score of 26:22.

Buducnost Podgorica celebrated a second and deserved Champions League win courtesy of an outstanding goalkeeper, Clara Woltering, the dazzling execution of a well-rehearsed running pattern while playing offense and a very physical defense, stretching and many times going beyond what the rules allow.

Too often, according to a frustrated and disappointed Ole Gjekstad in his last Champions League game as Larvik’s coach. Whatever plan he had in mind, it got derailed by getting off to a poor start, ultimately too many technical errors, resulting in 19 turnovers and failing to exploit the team’s most lethal weapon – the fast-breaking counter attack – even once.

On Monday morning following the EHF final, Randi Gustad, a former handball player on Norway’s national team, now analyst and expert at TV2, praised the well executed performance of Buducnost while being critical of Larvik’s efforts of not having stepped up their game once the referees had established the “rules of engagement”.  While many improvements come to mind when looking at Larvik’s offense, it is less apparent what a team can or should do, once the referees fail to protect a player’s health?

There is work to be done before the 2016 edition of the EHF Champions League final when Europe’s best female handball players will meet again at Laszlo Papp arena.  Let’s make sure that their handball artistry will be matched by equally skilled referees, that are capable of drawing a line before permissible toughness turns into unnecessary roughness.  It’s time.  Otherwise the next assembly of Europe’s top handball clubs may indeed turn into an event even more reminiscent of the late Laszlo Papp.

Let’s get ready to rumble!