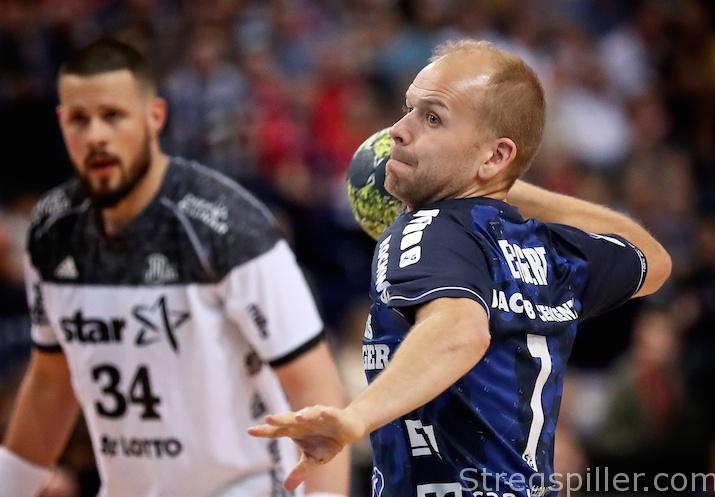 “Leaving Flensburg will be strange”

INTERVIEW – Slowly, Anders Eggert is facing the final curtain at SG Flensburg-Handewitt after 10 years with the North German club.

He admits that saying “goodbye” will be strange, but he is also looking forward to spending more time with his family.  Yet, he is also happy having the physical and mental resources for a comeback in the Danish national team – now.

“It will be strange.”

Anders Eggert has no doubt when being confronted with the fact that his career with SG Flensburg-Handewitt is soon coming to an end.

“Of course, it will be odd after 10 years – I am not sure how I will react once it is all over.

“However, now is the right time to go home.

“I need some more time to rest, and I am also looking forward to spending more time with my family.

“In fact, I have been reminded during the entire season that my time in Flensburg is ending soon.

“Also, friends and family in Denmark, have called to say, “We´ll come down for your last game”. All in all constant reminders,” says the 34-year-old left wing who has played in Flensburg since 2007, only interrupted by one year – the 2008/09 season – when he played for Danish, Skjern Håndbold, the club he will be joining once he leaves Flensburg this summer.

Before doing so, he has one big wish – and a look at the Bundesliga league table explains it all:

“To win the German championship!”

With seven matches left, Flensburg are second, trailing the ruling champions Rhein-Neckar Löwen by one point.

Only once before did Flensburg become Germany’s number one team, and that was in 2004, three years before Anders Eggert joined the club.

“The championship may very well be decided on May 28, when we play at home against Rhein-Neckar.

“However, there are several matches between now and that game and of course some more games thereafter. Keep in mind, all matches in the Bundesliga are difficult,” he states.

The German championship is the last title within reach for Flensburg, this season.

A month ago, they lost the final of the REWE Final4 (the German Cup ed.) 29:23 to the archrival THW Kiel, and recently, they were kicked out of the Champions League by no less than 10 goals on aggregate, by Vardar Skopje.

According to Anders Eggert, there is a logical explanation to all of this.

“The Bundesliga and winning the German championship have top priority this season,” he says.

Of course, it doesn’t mean that he or his teammates were happy to lose the REWE Final4, especially not against Kiel.

Likewise, it doesn’t mean that he did not care about losing his (probably) last chance to ever play the FINAL4 of the Champions League.

Having won the premier tournament in European club handball with Flensburg in 2014, it would have meant a lot to Anders Eggert to go back to Cologne one more time.

At the moment, his future club, Skjern still has a chance to play the Champions League in 2017/18 – but reaching the FINAL4? Probably not while Eggert is still active.

“Our resources have been limited due to injuries, throughout the season, and therefore, we simply had to choose which competition to give priority.

“This has been the Bundesliga, and hopefully, it will pay off at the end,” he says.

The coach of the rivals

While he is looking forward to the reduced physical and mental strain in the Danish league, with less matches, and shorter journeys, he already found time and resources, to return to the Danish national team.

“I need time to rest,” he told me when he took a break from the red-and-white outfit, back in March 2015.

Now, he is back, however, and joined the team for the two upcoming EURO 2018 qualifiers against Hungary.

“I really needed some breathing space two years ago, but now I am up to the task again, and it is just great to be back.

“The break I had in January during the World Championship worked well, and that is an important reason, why I feel ready again – now.

“I did not really expect to make a comeback before the fall.”

“This has played a part too.

“If Gudmundur would have continued, and only stepped down after this season – that was the original plan – it would have been pointless to return to the team before next season,” says Anders Eggert who has no issues playing for the coach of his club´s strongest rival for the German championship.

“I really like Nikolaj´s way of playing handball and I am very much looking forward to become part of it,” he says.

It is not only in the Bundesliga that tough challenges will be waiting for Anders Eggert. Two difficult qualification games for the 2018 European championship are on the agenda.

Hungary will be the opponent at Papp Laszlo Arena, in Budapest, on Thursday night, and three days later, the Hungarians are visiting Ceres Arena, in Aarhus for their second meeting.

Qualification matches aside, these games are also a chance for revenge. It was Hungary who defeated the Danes in the eighth final of the 2017 World Championship, back in January.

Even though, Anders Eggert was not part of the early and humiliating Danish exit in France, he is just as keen on winning the two encounters, as is the rest of the team.

“I am not sure the Hungarian team suits us very well.

“They have a big and heavy defense, and in attack, they play a very “Spanish” style of handball.

“I am not sure this will be our cup of tea.

“Still, I am confident ahead of the two fights, although it will be difficult – no doubt.

“You may say that we have all the chances to qualify in our last games against the Netherlands and Latvia, in June, but we may as well book qualification already now.

“Furthermore, winning the group will be important to our seeding in the final tournament.

“Therefore, as Nikolaj has put it, it will be crucial to win both matches, or at least be the better team after the two games.

“Anyway, I am really looking forward to being part of the national team again

“I can feel already how great it will be seeing all the lads again!” says Anders Eggert.