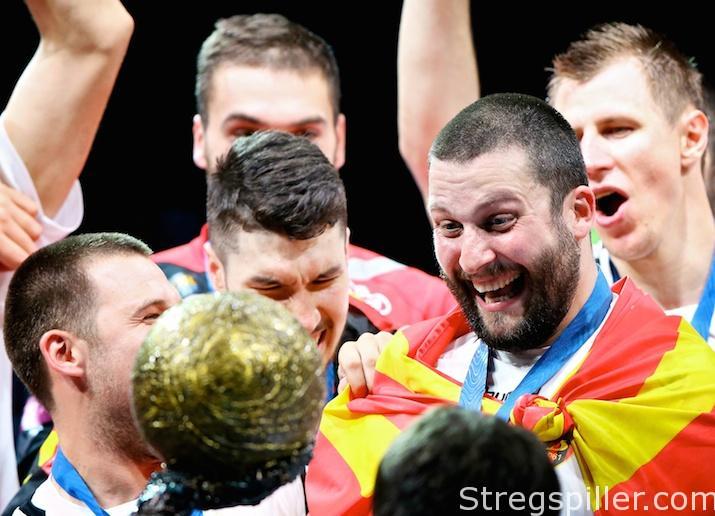 When I talked to Stole Stoilov, the captain of freshly crowned Champions League winner RK Vardar, for the first time during the Media Call at the EHF Final 4, I was instantly impressed.  He’s a force of nature, that’s for sure, but the true reason was a different one.  He talked about the prospects of Vardar at the 2017 FINAL4, and that he saw all four teams on the same level – seriously.

Too many times you have to label statements towards the media as well-rehearsed phrases – players have to use them, because if they don’t, they might chase them later because journalists won’t stop reminding them.  But Stoilov is a proud guy and he convinced me immediately that he actually believed in what he said.  He knew it won’t be easy to win it all, but he also knew that it wasn’t impossible.

Two days later, I talked to him again in the mixed zone of the Lanxess arena after the winner’s ceremony and there he reminded me of his very own words: “I told you so,” he said with a big smile on his face. Vardar had just stunned odds-on favorite Paris Saint-Germain thanks to a last-second goal of Ivan Cupic, taking the crown as the new champions of Europe.

Personally, I think it was well deserved.  I’m well aware of the fact that Vardar won both games in the final seconds, but the team showed resilience, courage and a great spirit along a very tough road.  The Macedonians hadn’t lost a game in a very long time and arrived in Cologne in a great form.  And after all, their offense was more creative compared to the other three teams.

Luka Cindric, the Croatian playmaker, demonstrated that there’s a reason why 2016 Champions League winner, KS Vive Kielce, signed him to a three-year deal starting in the summer of 2018.  He, together with Alex Dujshebaev, who will join the Polish outfit next season, put on a show in the semis against Barcelona, and while goalkeeper Arpad Sterbik might not be the youngest guy anymore he’s still capable of outstanding performances as well.

While Sterbik has been a handball superstar for more than a decade, Dujshebaev and Cindric still have room for improvement and should become household names in the years to come.  Vardar’s remaining roster featured other, more prominent names as well, like wingers Timur Dibirov and Ivan Cupic or Spanish veterans Joan Canellas and Jorge Maqueda.

And although I doubt that Vardar will be able to defend the title – no club has done so since the inauguration of the Final 4 in 2010 – we should not underestimate the Macedonians, or any other so-called underdog anymore.  Actually it’s a lot of fun to see the “smaller” teams win, though it’s hard to describe Vardar, the 2016 Kielce squad or Flensburg’s 2014 team as “small”, considering the overall quality of the clubs’ players.

But the exuberant joy of these teams winning the title in Cologne is somewhat more exciting to watch than having Kiel or Barcelona lifting Europe’s premier handball trophy at the end of the tournament for yet another time.

The FINAL4 is not all about the biggest names in handball, but it’s about courage, team spirit, desire, sacrifice, living for the moment.  Once again, we were shown that all players and coaches working together, it could make a (big) difference. You can defeat the favourite teams – even twice, or as Stole Stoilov would say: “There are no underdogs!”