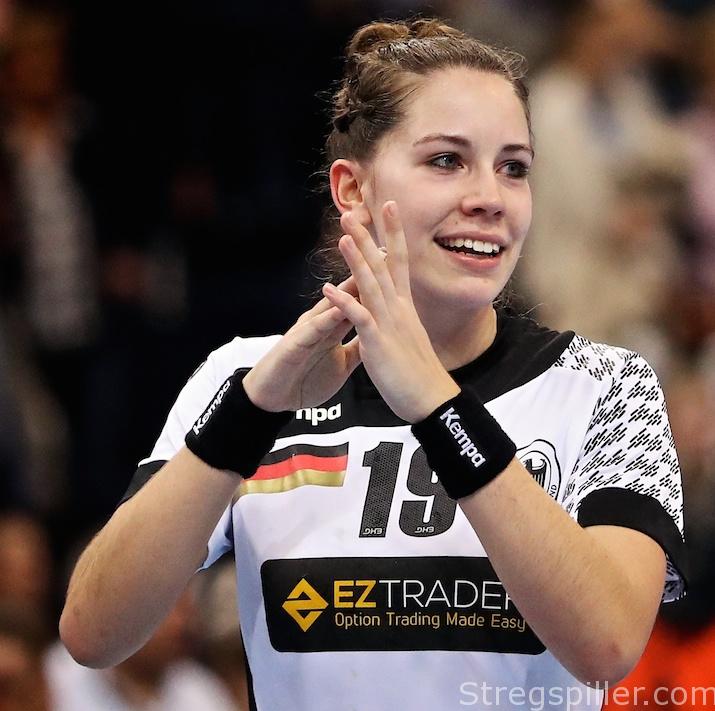 Emily Bölk is just 18 years old, but she talks like somebody who’s in the business for a long time.  Her list of achievements is extensive as well for someone her age.  She has won various youth titles and was named MVP in a number of competitions.

On the senior level she’s just making a name for herself and all eyes will be on her when the daughter of former World champion Andrea Bölk will try to follow her mother’s path, winning a major title with the national handball team more than two decades later.

First, let’s talk about recent results – last weekend you played against Sweden twice and it looked like the development of the team is stagnating compared to EURO 2016.  Why?

EB:  I think there are many reasons why we possibly didn’t play at the highest level.  First of all, there were some new faces in the squad.  Shenia Minevskaja and Xenia Smits weren’t around during the tournament last year and they still have to find their way back into the team.  Michael Biegler also experimented a lot.  I think we can still be optimistic to do something special at the World championship.

One thing that might be missing in your team is a real leader, like Sweden has with Isabelle Gullden.  Is it an issue?

EB:  It’s true that we don’t have one superstar that is able to win or lose games.  But I think it can be a real advantage that we have to work well as a team.  In my opinion we showed how well our crew is working during the EURO, in 2016.  We have to continue doing that, because everyone needs to know that every single player has to do her part to be successful.  And we can be successful as a team.

Usually when it comes to major tournaments on home soil, expectations of fans and officials are quite high, but what do you, as a player, expect from the World championship?

EB:  First of all, it would be great to have full arenas, because it really pushes you in tough situations, it can influence the opponent and can make sure that you really play at your best.  It just was a great feeling to play in front of so many fans in Hamburg last week.   So, I do hope the arenas will be as packed in December.  Obviously we want to make it to Hamburg, which means reaching the semi-final.  We all are highly motivated to win a medal and we still have some time to prepare to reach our goal.

You said it can push you, but it can also backfire and result in too much pressure for you and the team.  Do you see this problem as well?

EB:  Of course I do, but usually we try to turn it into positive energy because it’s great to have so many people believing in you.  I think it’s the better approach anyway, to not think about what might be, but to be positive, take one game at a time and then just accomplish what’s possible.

Talking about pressure – I would like to know how you deal with it personally, because everyone is talking about you as the future face of German handball?

EB:  Well, at least I notice it.  You can’t avoid social media these days.  First of all, I try to focus on my individual performance, as Michael Biegler likes to call it, so I can help the team in the end.  I have two great coaches, at my club and at the national team, who take care of me and help me to develop as a player. I try not to think about expectations too often and so far it has worked out well.

With the exception of one year at the youth academy in Viborg you’re playing for Buxtehuder SV since you were four years old.  Will you ever wear a different jersey?  Your skills are no secret to bigger clubs anymore.

EB:  When I extended my contract for one season last year, I said it’s not a question if I leave the club one day, but rather when.  I think it’s important to see something different to develop as a player and as a person.  I had a great time in Denmark and I really like the Danish mentality.

So it’s more likely to see you outside of Germany rather sooner than later?

EB:  I’m not sure about that, but I want to see something different and I can always come back home.