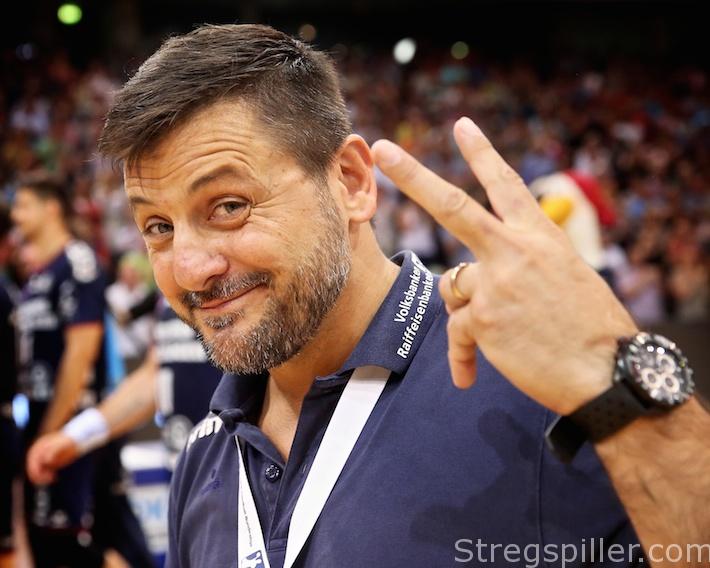 Ljubo lives well with the pressure

INTERVIEW – As a player, he always wanted to win, and so does Ljubomir Vranjes as a coach.  This attitude fits well with the ambitious goals of his employer, SG Flensburg-Handewitt.

“I just want to win”, is the direct translation of Ljubomir Vranjes book,“Jag vill bare vinna!”

You do not have to talk long to the 42-year-old Swedish head coach of SG Flensburg-Handewitt to realize that he lives by this philosophy.

“I want to win every match, I play. I can never imagine losing a game no matter how important or unimportant it might appear to others,” emphasizes Vranjes – or Ljubo, as he is nicknamed.

This attitude fits very well with his employers´ aspirations.  In Flensburg-Handewitt, they want titles.

The club near the Danish border, recorded sensational wins in the Champions League in 2014 as well as the German Cup in 2015, but they have only won the German championship once – as far back as in 2004.  Last season, they finished second after Rhein-Neckar Löwen.

As a player, Ljubo was a just as driven – as playmaker with the famous “Bengan Boys”, the successful Swedish national team of the 90ties.

Measuring 166 cm in height, he was not the tallest one among the back court players – to say the very least – but he compensated all of it with speed, technical skill and his outstanding ability to read a handball game.

Since 2006 Vranjes won three European championships and one World Championship with Sweden.  In Flensburg-Handewitt he first acted as playmaker, and in 2010 he became coach.  But even, as a coach, he happened to enter the court on a few occasions, when Flensburg was hit by injury.

Right now, Flensburg’s players are all well – except for recovering playmaker Rasmus Lauge – still, Vranjes´ preparations for the upcoming Bundesliga- as well as Champions League season have been hit by a problem – the Rio Olympics.

For three weeks – during a crucial part of preseason training – seven of his players have been chasing medals in Brazil.

Not the best working conditions for a coach who has to get his squad ready for the start of the handball season on September 3, when HC Erlangen will be visiting Flens Arena.

For many years, Flensburg has been known to be a club that is not exactly keen on having players spending time with their respective national teams.  Several federations have accused Flensburg of putting pressure on players to make them skip their national team gatherings.  And a number of players have done so over time.  Danish Thomas Mogensen and German Holger Glandorf are current examples.

However, Ljubomir Vranjes appears to be quite relaxed with regards to the players who choose to represent their countries.

“Of course, it reduces the quality of the training, but we have had sufficient time to anticipate this situation, and we have planned our preparation accordingly.  And if we get into trouble forming a team for test matches, I am still on the players´ list,” says “Ljubo” with a laugh.

“Those players who are in Rio have peaked before the rest of the team, and that may be a problem later in the season, but I think because of the depth of our squad, we can compensate for it.

“Furthermore, we have the advantage of a well rehearsed squad.  Last year, I had to integrate no less than five new players in my crew.  This year it has only been one.” (Croatian left back Ivan Horvat from GRK Varazdin 1930, ed.)

New rules – some are good, some are not

His statement about having a “deep squad” was confirmed at a recent test match against Danish top team KIF Kolding Kobenhavn, who were only missing two players compared to Flensburg’s eight -still, Flensburg won 33:27 – in a game where Vranjes did not have to put on his jersey, by the way.

Part of preparing for this season also includes learning new rules, which have been imposed by the IHF.

Ljubomir Vranjes appreciates some of them and while disliking others.

“I kind of like the rule about a player having to sit out for three attacks, after receiving treatment on court without his opponent being punished.

“This may prevent Marko Vujin lying on the floor in our goal area, again and again, stopping us from running fast-breaks,” he says – referring to THW Kiel´s Serbian right-back, heating up the rivalry between the two top North German clubs – Flensburg and Kiel.

The most disputed new regulation, however, has been the seven-against-six rule.  When asked what he thinks of that rule, Vranjes grimaces in a way that clearly indicates that he is not happy about it.

“Well – I am sure, I am going to practice it a lot, and I cannot rule it out completely, of course.  In any case, we must know how to defend against those who may use it, so we obviously have to work with it as well,” he says.

German clubs have been accused frequently of giving a higher priority to the Bundesliga than to the Champions League.  Such rumors cannot be discarded as Lars Christiansen once told me:

“When I played in Flensburg, our priorities were as follows: 1. Bundesliga. 2. German Cup. 3. Champions League.

“This is not the case anymore, certainly not in Flensburg,” Christiansen said, and Ljubomir Vranjes confirms his words.

“I could never make such a priority, and neither could the club.

“We would never do that, and as I said before, I want to win every match I am involved in.

“And who says, this could not happen again? Last season, we were one penalty away – that was not awarded to us – from qualifying for the FINAL4 again.” he states.

Last season, Flensburg finished second in the Bundesliga, behind the new German champions, Rhein-Neckar Löwen, but – and this is important in Flensburg – ahead of THW Kiel – the rival finished third.

“I hope we can at least repeat our achievement of last season.

“Of course, our preparations have suffered a bit from having players at the Olympics, but that is pretty much the same for all the potential top teams in the Bundesliga.

“Last season, we lost relatively many points early in the season due to the fact that we had to integrate five new players.  “That’s something we do not have to deal with this time around, and I expect us to benefit from it,” says Vranjes.

Veszprém, Paris Saint-Germain, FC Barcelona, THW Kiel – that sounds like a list of the strongest club teams in the world, and in fact it is.  Flensburg will be up against all of them during the group phase, in the upcoming Champions League season.

When you add the eternal Polish runners-up, Wisla Plock, to this elite group of clubs, it is no wonder that many experts have called this one the toughest Champions League group ever.  Only Danish champions Bjerringbro-Silkeborg and Swiss title-holder, Kadetten Schaffhausen, appear harmless in comparison.

“Of course, it is the strongest Champions League group ever, but we certainly have a chance, especially in our home matches. Flens Arena is no easy place to visit and score points – it may be a bit more difficult away, as some of the teams also play in some rather intimidating venues.

“However, we are really looking forward to take on all these great teams, and I am sure that the Champions League winner 2017 will come from our group – and who says it cannot be us?  Just think of 2014.  And, as I said, last season, only one penalty separated us from the FINAL4.  This just goes to prove what you can achieve it you believe in yourself!” says Ljubomir Vranjes.

National coach?  No thanks, maybe later

Beside his job in Flensburg, he has had a short spell as Serbian national coach, but he turned down the offer to take over the Serbian team on a permanent basis.  More recently, he also said “no” to the job as national coach in Sweden, where his former teammates, Staffan Olsson and Ola Lindgren, are stepping down.

Doesn´t he want the coaching job with a national team?

“Absolutely, but I simply saw the strain as being too big.  If I was going to be Swedish national coach, I would have to be away at least 55 days a year with the national team, on top of my job here in Flensburg.  That would have been simply too much for myself and for my family.

“However, there is no doubt in my mind that I want to coach a national team – one day,” he says.

This may not be any day soon, though.  For now, Ljubomir Vranjes has plenty to do in Flensburg. But for how much longer does he see himself coaching a club, where he has been for more than 10 years?

“I have a contract until 2020, so right now, this is how long I see myself here.

“I do not think any further at the moment, and who knows – if I lose a number of matches in a row, I may be coaching for a considerably shorter period than 2020,” he says while laughing – indicating that he does not consider this scenario to be a likely one.