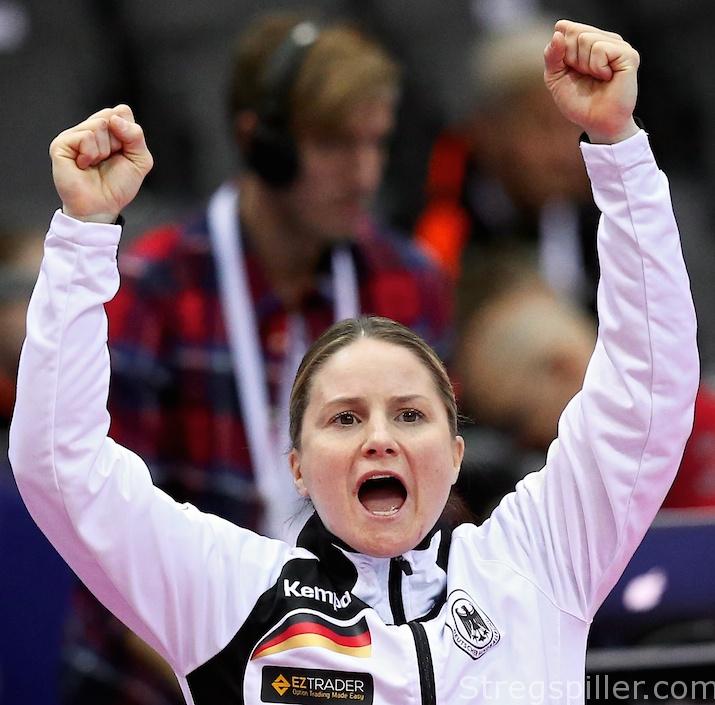 Loerper not feeling the pressure – yet

Just recently Anna Loerper was named Germany’s Handball Player of the Year for a second time in a row.  While she didn’t outperform her competitors as much as last year, she still did an outstanding job, on and also off the court, as the new captain of the German national team.  I talked to the playmaker of the TuSsies Metzingen about her personal accomplishments, new German head coach Michael Biegler and the upcoming World championship.

You were again awarded Handball Player of the Year in Germany.  First of all congratulations because it’s a great achievement.  However, I have to admit that I was a little surprised, since you played on such a high level the year before, when you won the award for the first time – it was quite difficult to top it a second year in a row…

AL: If you consider this season that maybe true, but Handball Player of the Year captures the whole year 2016.  Sure, opponents know what to do, to defend against me more and more, especially against the combination Behnke-Loerper.  But I wouldn’t say, I’m playing a season that’s worse than the previous one.  It has become more difficult, for sure.  Last year, I was able to surprise many.  But as I said the award also includes the second half of last season and I think I played above-average most of the time.  I’m just happy about the prize, because it shows that my performance is recognized all over the country. It’s a great honor!

The year 2016 also included the EHF Euro in December, when the German team was able to get back on track.  How often do you still think about the final minutes of that game against Spain, that cost you a place in the semi-final?

AL: Not at all to be honest.  Sports is such a fast moving business, you just have no time to waste.  You just can’t cry about losses. Actually, I’m very proud we came in 6th, that we developed as a team and that the fans at home were so impressed by what we accomplished.  I was extremely happy about the feedback we received in Germany when we came back home, confirming that we are on the right track.  So, I don’t want to think about what might have been, because we did a great job anyway.

We have to talk about Michael Biegler, your national coach.  When he was introduced as the new team leader, I thought it might be a difficult combination – “Beagle” and the ladies.  So far it seems like the perfect fit.  Why?

AL: First of all, I have to say that I had no doubts whatsoever.  I already worked with male coaches in the past and I’ve always learned a lot.  The same goes for Michael Biegler.  I was convinced by his personality right away and especially how he handles and how he leads the team.  He has a clear plan, a clear idea of what he wants to do.  We were able to push some kind of reset button and that’s what he wanted us to do as well.  It works until now, it feels good and hopefully we will be successful in December.

The World championship 2017 is a good point to talk about, because you will be under a lot more pressure compared to the tournament in Sweden, last year.

AL: Sure, that’s true – there was hardly any pressure on us.  We had some new players on the roster, a young squad, and a new coach, who actually took all the pressure on himself, he just let us play some handball.  Everybody will expect much more in December, including us.  But we will have around 80, 85 days working together until the start of the tournament and we will take care of it.

Are you afraid of the situation that you might not be on television while winning a medal on home soil?

AL: It’s a quite sad situation and actually something I can’t get out of my head.  For us it’s a great chance to get into the focus of a wider audience during such a tournament.  It’s also an excellent opportunity to get some publicity that we were able to get the World championship to Germany and to position women’s handball.  It would be a huge loss for all of us if there were a TV blackout.