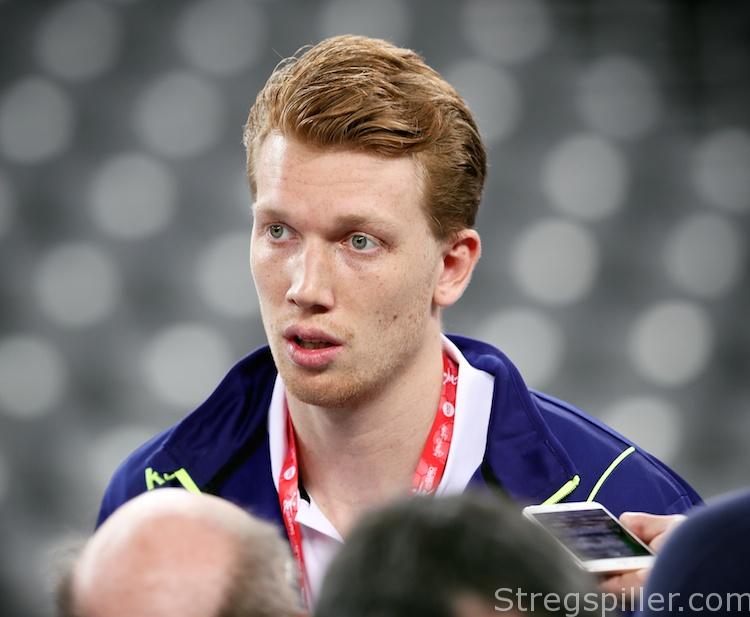 “Looking forward to a Flensburg reunion”

INTERVIEW – Among other things, the European championship semifinal between Denmark and Sweden will be a reunion of several SG Flensburg-Handewitt players. No less than seven, maybe eight of the players in the semifinal, in Zagreb are playing for the North German club.

At least one of them, Swedish left back Simon Jeppsson, is looking forward to it.

When Denmark and Sweden meet in the second semifinal at the European championship, on Friday night, the match will – among many other things – be a reunion of several SG Flensburg-Handewitt players.

The Danes Lasse Svan, Henrik Toft Hansen, Rasmus Lauge and Anders Zachariassen are all playing for the North German club, and they may be joined by goalkeeper Kevin Møller, in case Niklas Landin will have to fly home due to his wife´s expected childbirth.

“Of course, this is just another reason, why I am looking forward to this match,” says Sweden’s Simon Jeppsson.

“The Danes who play in Flensburg know us Swedes very well, but we know them too. So, I am sure we are pretty evenly matched,” finds the 22-year-old left back, who is playing his very first European championship.

Jeppsson and his Swedish teammates experienced a few anxious hours this past Wednesday night, before their semi-final berth became a fact.

After losing 25:28 against Norway – Sweden´s third defeat in the tournament – players and coaching staff had to wait for the outcome of the last main round match between France and Croatia.

At that point, only a French win would send Sweden through to the semifinals, and when France defeated the host 30:27, Sweden could finally celebrate, at least for a brief moment.

“We probably were even more nervous during the match between France and Croatia, than we were before and during our game against Norway.

“Not being in charge of your own future but depending on other teams’ performance is a peculiar feeling. But France did very well and we are very grateful to them that we are going to play a semifinal on Friday night,” Simon Jeppsson tells stregspiller.com.

Very few people expected Sweden to reach this stage after their disastrous opening match in Split, where they ended up losing 26:24.

Simon Jeppsson admits that he was not exactly thinking about a semifinal appearance either that night.

“I suppose you could say that I am bit surprised that we’ve gotten so far.

“Thoughts of a semi-final did not go through my head after our poor performance against Iceland.

“However, small things often decide handball matches and the fact that we avenged our loss against Iceland by defeating Croatia meant a lot to our self-confidence. From that match onwards we improved a great deal.

“I think we deserve to be in the semifinal,” says Simon Jeppsson who joined Flensburg from Swedish league club, HF Lugi Lund, before this season.

He is happy and proud of his first European championship, so far.

“Representing your country at a big championships is a great honor and to me it has been a dream come true.

“We have a great atmosphere within the national team, and being part of this squad is entirely positive,” says Jeppsson who admits to having benefitted considerably from his transfer from Lund to Flensburg.

“It has meant a lot for my game.

“Getting used to playing with and against players at the international top level every week and to play in the Champions League has given me international experience, which I did not have at the World Championship last year.

“One might think that half a year would not mean that much, but to me it has,” says Simon Jeppsson who has his own expectations ahead of the semifinal between the two Scandinavian teams. For one, he expects their goalkeeping duo to have a critical impact on the match.

“It will be decisive. Absolutely!

“In my opinion, Denmark and Sweden are the two teams with the best goalkeepers in this tournament.

Our goalkeepers know the Danish players just as well as the Danish goalkeepers know our players – a lot will depend on who hits the day. But we will also need to do everything we can on the defensive end, to give our goalkeepers the help they deserve,” says the 203 cm tall left back, who sees Denmark as the odds-on favorite in the Scandinavian derby but not by much.

“I am not really sure, though.

“Actually, I think that our top level is good enough to beat Denmark.

“However, we have not shown our top level very often, so far.  At this point, I’ll probably see Denmark having a small edge,” says Simon Jeppsson.