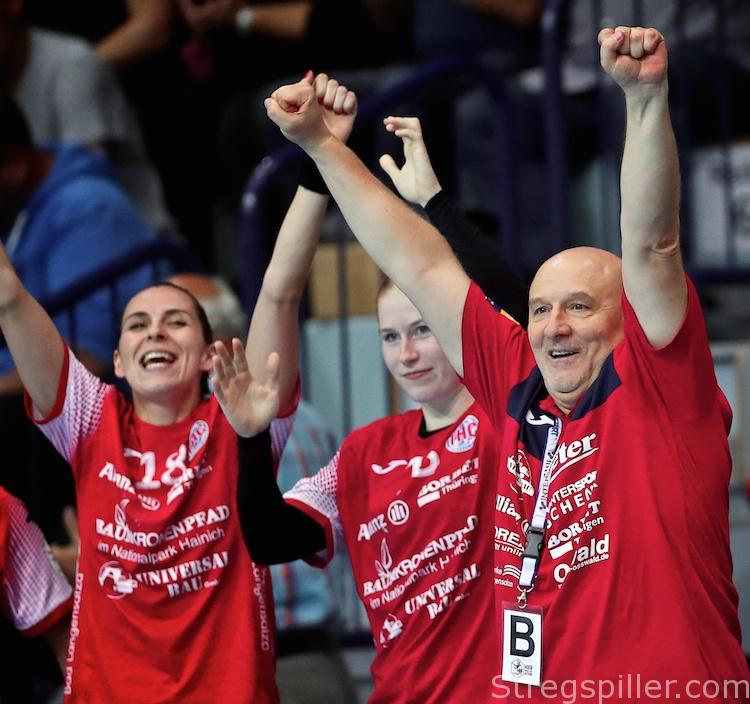 stregspiller.com MATCH OF THE WEEK – A successful penalty shot from Iveta Luzumova with 32 seconds left on the clock, secured Thüringer HC a draw against Krim and a ticket for the main round, as Podravka suffered the expected defeat versus Györ.

A serious accident involving THC player, Krisztina Triscsuk, early in the second half cast a shadow over the match but did not affect her teammates.

*THC needed at least one point to qualify for the main round, assuming Podravka would lose against Györ.

*Although Krim had already qualified, the match was still important as to how many points each team would carry to the next phase of the tournament.

*Krim had won the first meeting between the two teams this season (27:20), but THC had shown improving form over the past few weeks.

*THC were seriously handicapped, missing right back, Alicia Stolle, who got hurt in a Bundesliga match during the week. Left wing Jovana Sazdovska was also missing due to injury.

*Compared to their 32:23 defeat at home against Györ a week ago, Krim welcomed back left wing Tamara Mavsar.

Herbert Müller´s (coach THC) seven-against-six tactic in the second half combined with an impressive morale of his team, earned the German champions a crucial draw.

After the host had been trailing by three goals for long stretches of the game, Iveta Luzumova secured the Champions League life-saving tie, scoring from the penalty spot with 32 seconds left to play.

Krim were able to contain THC top scorer, Iveta Luzumova, for most of the first half, as she only scored twice in the first 30 minutes. This was the most important reason, why the visitors slowly got the upper hand.

Still, THC had the better start to the game, leading 3:1 and 5:2, but it did not take Krim long to catch up, and after 14 minutes, the versatile Greek backcourt player, Lamprini Tsakalou, equalized at 7:7.

And, two minutes later, the Ukrainian line player, Olga Perederiy, handed the team from Slovenia the first lead at 11:10. As THC did not score for the better part of seven minutes, Krim increased their lead to 13:10.

Towards the end of the half, THC coach Herbert Müller tried playing seven-against-six and even seven-against-five during a suspension, but it would not prevent Krim enjoying a two-goal advantage at the break.

Nina Zulic opened the second half, increasing her team’s lead to three (17:14) again, before the match had to be interrupted for 12 minutes, as THC’s backcourt player, Krisztina Triscsuk, accidentally sustained what looked like a serious injury.

It was the last thing that the already decimated THC squad needed, but Triscsuk´s teammates did not seem to be impacted by the accident.

Still, it was Krim who kept a tight grip on the game, as the visitors continued to lead by two or three goals.

Krim’s goalkeeper, Misa Marincek, stepped up behind a much improved Slovenian defense, and in attack, Lamprini Tsakalou was on top of her game, scoring seven goals in total.

Yet, Müller´s consequent tactic playing seven-against-six began to pay dividends, with Saskia Lang one of the main beneficiaries. The experienced left back went on to become her team´s highest scoring player with seven goals.

Several times, THC reduced the deficit, and with 32 seconds left on the game clock, Luzumova tied the game.

In the following attack, Saskia Lang drew a two-minute suspension, and Krim’s coach, Uros Bregar, called for a timeout, but his team could not get a shot off before the buzzer sounded.

THC players celebrated the result, as if the score between Györ and Podravka was a given. A few hours later, they were proven right, as Podravka lost by no less than 20 goals, against the Hungarian champion.

THC made sure that German handball will be represented in the main round of the 2018/19 Champions League after all, but the Germans will only take one point to the next stage of the competition, whereas Krim will carry three points to the next round.