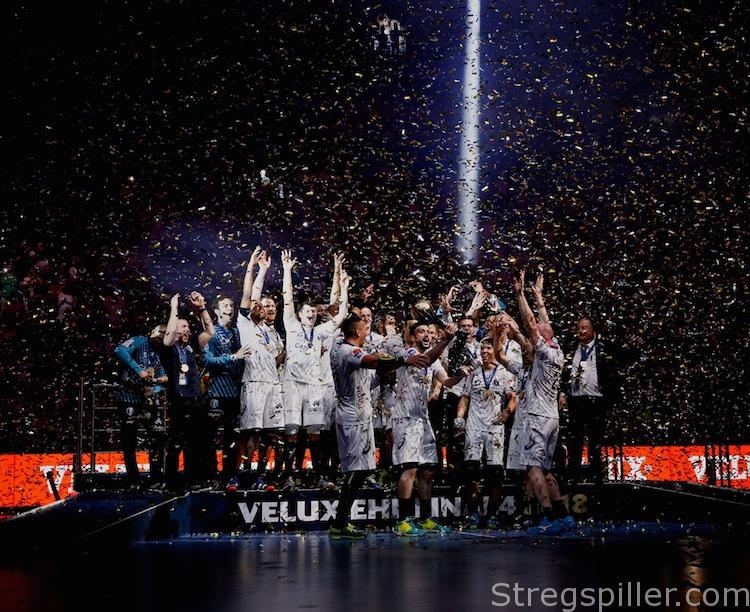 FINAL REVIEW – Montpellier HB celebrated the 15-year anniversary of their first, and until today only, Champions League triumph by repeating the achievement on Sunday.

In a brilliant and, at times, breathtaking final, they won the French derby against HBC Nantes in convincing fashion.

One thing we were sure of already before the first whistle was that we were going to have a French EHF Champions League winner for only the second time in history.

One of the teams in today’s final, Montpellier, was the only French side to lift the trophy, and this was back in 2003.

With Montpellier in the final, it was also the first time a team from Groups C/D made it all the way, not only to the FINAL4, but to the final itself.

Nantes came into the game with the slight advantage of playing the early semi-final and had an extra couple of hours rest, while the Montpellier players appeared exhausted at the end of their semi-final against Vardar.

Not only did Montpellier celebrate the 15-year anniversary of their only Champions League win by taking the title for the second time in history, but they also became the first team to go all the way from the lower groups of the competition, known as Groups C/D to reach the FINAL4 and go all the way.

The Montpellier win was obviously deserved, but despite trailing most of the time, and despite being outplayed at the end, Nantes also had their part of the credit for creating one of the best Champions League finals we have seen.

What a contrast to the bronze medal match.

The first half of the final was nearly breathtaking for great parts.

Fine combinations, spectacular goals, great goalkeeping, and, as the game progressed, good defending was what we got – the latter came especially from Montpellier.

Considering the two teams’ knowledge of each other, they obviously could not surprise each other with much and that also applied to Montpellier´s 5-1 defence, be it the traditional 5-1 formation, pushing a player forward in the middle, or the 5+1, pushing a defender forward on one of the sides.

However, after Nantes held early leads 4:2 and 5:3, it was actually Montpellier who took off around the middle of the first half, with a three-goal run handing them a 10:7 advantage.

This had a lot to do with Vincent Gerard.

The 31-year-old Montpellier goalkeeper certainly stepped up during the first 30 minutes, increasing his saving percentage to 46 before half-time and having some impressive and crucial saves among them.

However, it also had something to do with Montpellier’s backcourt players finding a stellar Ludovic Fabregas on the line, from where he scored four goals from five attempts, one more spectacular than the other.

Montpellier’s lead momentarily extended to four at 15:11, before heading into the dressing rooms three up again.

Nantes coach Thierry Anti brought Espen Lie Hansen on from the start of the second half, maybe due to an injury on Romain Lagarde, which proved to be a good decision, as the Norwegian scored the first three goals of the second half to equalize at 16:16.

This really opened up the second half and the quality definitely did not drop.

While Cyril Dumoulin stepped up in goal, though, Nantes came back once again, and with nine minutes and 39 seconds left, Eduardo Gurbindo equalised at 24:24.

However, just as Nantes seemed to be turning the tables, they fell apart. Montpellier went on a 5:0 run and anyone who might have expected Nantes to have more in reserve, were mistaken.

Melvyn Richardson opened Montpellier’s incredible finish and a sublime hattrick from Diego Simonet within five minutes completed their astonishing ride from 24:24 to 29:24 and they had one hand on the trophy.

Many people had feared for the attendance and the atmosphere in the LANXESS arena this time, with no German teams in the FINAL4 for the second year in succession and without many Hungarian fans after Veszprém’s exit in the Last 16.

However, there was no reason to worry.

The arena was practically full on both match days and the atmosphere was simply great.

The debate is already raging, if the FINAL4 should be removed from Cologne, when the current contract expires in a couple of years, but this weekend did not provide any arguments for moving the event.

Montpellier may not win the French championship, which will be a disappointment after being so close, but the Champions League win will certainly be a rich compensation for that.

It also has to be said that they did not let the defeat against St. Raphael Var on Tuesday, which may cost them the French title, affect their performance here in Cologne.

French handball as a whole will enjoy having occupied the three podium positions in the Champions League this season.

Another record, as no other country has ever taken all three top positions in the tournament.

And the Frenchmen should really enjoy their triumph – expecting a repeat of this any time soon would probably be a bit naive!