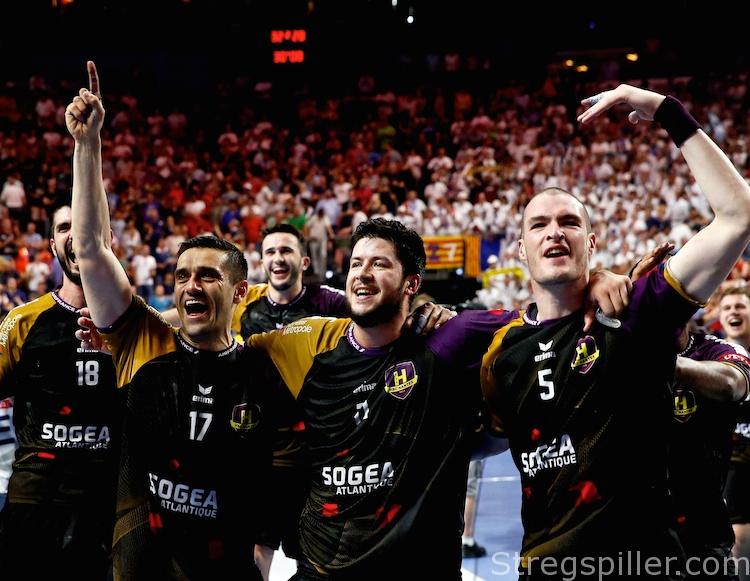 While everyone expected PSG to reach the VELUX EHF FINAL4, which they did for the third time in a row, the big question was whether they could lift the trophy for the first time.

Just like the two previous years, the powerhouse from the French capital was seen as the biggest favourite to win the competition, especially as the three other contenders were generally rated as weaker than previous years.

Unlike PSG, Nantes was the surprise of the Champions League this season.

After an impressive performance in the group phase and a relatively easy Last 16 tie against Belarusian side Meshkov Brest, they were handed a gift as Skjern eliminated Veszprém, which gave Nantes a more winnable quarter-final against the Danes.

Ahead of the FINAL4, Nantes enjoyed taking on the role as underdogs, which Vardar did with success last year.

Once again, it was not PSG´s FINAL4, as Nantes pulled off a surprise, some would say sensation, and qualified for the final thanks to a thoroughly deserved four-goal win in the first semi-final at LANXESS arena.

A stellar Cyril Dumoulin in the Nantes goal played a great part along with a tactically very well prepared team under head coach Thierry Anti who also has his big share of the honour for the triumph.

His adversary Zvonimir Serdarusic never seemed to find the right tactical moves or to be able to make his players really believe in their chance.

Despite an early two-minute suspension for Luka Stepancic, PSG took an early 3:1 lead, but that was just about as good as it got.

Nantes soon took the initiative and earned their first lead at 5:4.

After that, they scored four goals in succession, turning a 6:5 deficit into a 9:6 lead, and things turned worse for the favourites from Paris, as Nantes maintained a five-goal lead.

There were some obvious reasons for Nantes’ dominance.

One reason was the fact that Cyril Dumoulin won the goalkeeper duel clearly from the start.

In front of him, Dumoulin had a brilliant flexible and physically strong defence, which caused the PSG attack serious trouble throughout the first 30 minutes.

PSG managed to crawl closer before half-time, and this was for a great part due to Nedim Remili.

He had actually been on the court from the start, but mainly served brilliantly by Nikola Karabatic, the 22-year-old right back scored three quick goals in the last minutes of the half, bringing the difference down to two goals at 16:14, before Nicola Tournat made sure that Nantes took a three-goal lead with them into the break.

Those who expected PSG to claw their way back early in the second half, had to think twice as Nantes jumped into the driver’s seat again.

Now, it was not only due to Dumoulin, although he went on in great style, but also due to series of downright elementary mistakes from PSG.

This way, Nantes were able to increase their lead to six goals for the first time at 20:14.

Mikkel Hansen had not got much court time in the first half, where Zvonimir Serdarusic preferred Sander Sagosen, but the Dane made the most of his chance when he got it.

It did not take him long to score five goals and alongside an in-form Remili, dragged PSG back into contention.

Unfortunately for Hansen and Paris, however, he also missed some crucial chances in the dying minutes of the game.

As the second half progressed, PSG began to make Cyril Dumoulin look human and they actually managed to set up a thrilling final few minutes.

After drawing closer and closer all the time, PSG managed to reduce the deficit to just one goal, as Sagosen made it 28:29 with four minutes and 51 seconds left.

And as Thierry Omeyer, who had returned to the PSG goal, finally made a save 40 seconds later, Paris even had the chance to equalise, but blew their chance with a two-man advantage.

Instead, Nantes and Dumoulin set up a triumphant final couple of minutes, during which they scored the final three goals of the match.

Dominik Klein, who is playing his last FINAL4, had the honour of scoring the last goal of the match with 56 seconds left.

Among many spectacular goals and saves, one goal stands out:

As Olivier Nyokas played to ball behind his back to Dominik Klein who equalised to 4:4 from the left wing, spinning the ball around Thierry Omeyer.

That has not been seen often in Klein’s long career and his former teammate did not see it coming.

Zvonimir Serdarusic, on missing out on his last chance to win the FINAL4 with PSG:
“I am always unhappy, when I lose a game, and it is particularly sad to lose a game at the FINAL4 here in Cologne.
“However, two or three days ago, when I realised that I only have to work for another eight days, I was happy!”

Nantes will spend some nice hours preparing for the final on Sunday.

For the second year in succession, a FINAL4 debutant reaches the final – last year Vardar, this year Nantes.

No case of third time lucky for PSG – the FINAL4 does not seem to be their thing.

Will it ever be?