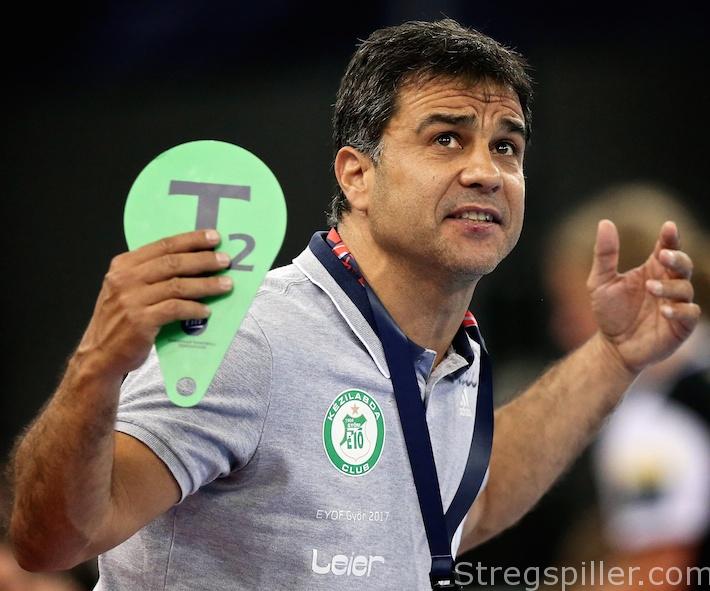 While we strive to have a Match of the Week every time clubs of the Women´s EHF Champions League square off, we cannot always promise a spectacular performance.

This weekend, however, when attention was mainly drawn to Group C, we find it necessary to honor FC Midtjylland´s astonishing victory against CSM Bucuresti and call it “Sensation of the Week”.

Group C of the Women´s EHF Champions League drew all the attention this Saturday.  Two impressive comebacks characterized the games between Rostov-Don and Gyor – leading to a narrow 28:27 win for Gyor – followed by FC Midtjylland´s sensational 24:21 victory at home against ruling champions, CSM Bucuresti.  The results more or less turned this do-or-die group upside down.

An amazing comeback, spurred on by their goalkeeper Kari Aalvik Grimbø, secured Gyor two crucial points in a match, that Rostov-Don controlled well into the second half.

Aside from Grimsbø, other key players like Heidi Løke, Eduarda Amorim and Anita Görbicz contributed to the victory as well and the win may make the difference which team will sit on top of Group C in the end.

Last season, Rostov-Don went undefeated through group phase as well as main round of the Champions League.  One week ago Jan Leslie’s team lost 21:24 on the road against the champions from CSM Bucuresti, who also defeated the Russian side in the quarter-finals in the spring 2016.

Gyor had opened their Champions League campaign with an impressive and convincing 31:19 victory at home against FC Midtjylland.

Both coaches – Jan Leslie (Rostov) and Martín Ambros (Gyor) used most of their bench in this important game.

At first, the stars of Gyor seemed to click much better than the home team – the visitors had a small advantage for most of the first half.

Martin Ambros enjoyed several two-goal leads until the first of two comebacks in the match.  As half time approached, several spectacular saves by Katrine Lunde and some well timed goals of Anna Vyakhireva and Ana Paula Rodrigues allowed the hosts to turn the table while taking a two-goal lead (14:12) to the locker room.

But the game would turn one more time.

The best have to be the best.

I think this expression stems from the Stanley Cup – the play-offs of the NHL – the catch phrase simply implies that your key players have to be at their best in the critical moments of a decisive match.

Indeed, Gyor’s top players were at their best, when the match entered crunch time.  The club from Hungary managed to catch up once again at 26:26 with three and a half minutes left, when Nora Mørk scored the equalizer.  It was also Mørk who handed the guests their first lead in the second half, at 27:26, one and a half minute later.

Then it was Kari Aalvik Grimsbø´s turn.  The Norwegian international had returned to Gyor’s goal after leaving it to Eva Kiss for extended parts in the second half.  It turned out to be a golden decision by Ambros Martin.

A triple save, including a penalty shot – the scoreboard still read 26:27 – gave the ball back to Gyor and Görbicz made most use of it, when she decided the match with her goal, 21 seconds before the end.

The result may have a meaningful impact on the Champions League final outcome.

Having won on the road against one of their strongest rivals for the title, Gyor have further strengthened their position as favorites for the title – a position which was strong already.

To Rostov-Don and their coach Jan Leslie, the situation presents itself problematic after only two games.  His squad has lost four points already, points they will be missing all the way through the group phase as well as main round.

Sensation of the Week

Now, be honest – who saw this one coming?

FC Midtjylland – they were trashed by Gyor in their first group match just one week ago – defeated the reigning champions who had started their Champions League campaign with a three-goal win at home against Rostov-Don.

It was a pity that only 1,785 spectators witnessed the handball miracle in IBF Arena, in the small Central Jutland town of Ikast.  It was quite impressive, how well Midtjylland were able to hang with Bucuresti in the first 30 minutes, when they were leading several times, never allowing CSM to run away by more than two goals.

Eventually, the event turned into a sensational game after the break, when German veteran goalkeeper, Sabine Englert, pushed her young teammates forward courtesy of a series of impressive saves.

CSM enjoyed their last lead at 11:9 at the start of the second half.  The rest of the match belonged to Midtjylland, and CSM’s coach Jakob Vestergaard who celebrated so many great triumphs in nearby Viborg six and seven years ago, could only watch his team losing.  Midtjylland went ahead 15:12 and 23:19 – the match was decided several minutes before the final buzzer sounded

Buducnost had Cristina Neagu back and she celebrated her return to the court by making 1:0 for the visitors, 40 seconds into the game, but Dragana Cvijic remained on the injured list.

However, Glassverket who had lost no less than 40:25 to Larvik, in Norway’s league just some days earlier, offered fine resistance in the first half.

They managed to change 1:4 deficit into 6:4 advantage of their own, and at half time, they were down by two goals only.

As the second half progressed, the Champions League debutants from Drammen found it tougher to hang with Buducnost.  The team of coach Dragan Adzic did not have much trouble increasing their lead steadily during the last 30 minutes.

It was the first time ever, these two teams met in the Champions League, and Metz celebrated it with a decisive win; a victory that was only jeopardy in the first half.

After the break, the French squad was better on both ends of the court and pulled away, eventually.

What’s the matter with Larvik these days?

Yes, they lost Nora Mørk, and yes, they have some injuries to deal with, but this does not explain why they break down in the last 15-20 minutes of the past two Champions League matches.

It happened in their opening match, when a 17:13 lead after 35 minutes turned into a 22:25 defeat at home to Savehof.

And it happened again in Ljubljana, when Larvik were leading for 40 minutes, only to lose again.  Quo vadis Larvik?

The second match in this group will be played on Sunday afternoon – a Scandinavian derby between Savehof and Esbjerg. Following the surprise loss of Larvik against Krim, the game in Savehof has gained in significance.