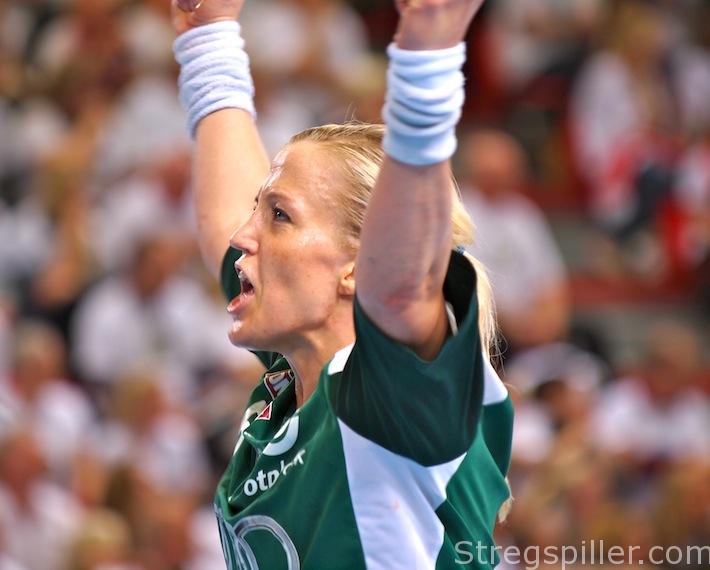 While critically acclaimed artist Frank Zappa – God bless his soul – was performing for the second night at the Ahoy in Rotterdam, 62 miles north in Alkmaar – a small town known for its traditional cheese market and the Beatles Museum (indeed John Lennon’s first guitar was made in Alkmaar) – Cornelia “Nycke” Groot was welcoming the very first day of her life.  Little did she know that one month later the national Dutch football team would win its first (and so far only) international title beating the Soviet Union 2:0 in Munich’s Olympia stadium.  Van Basten’s goal, in which he volleyed right-footed over the Russian keeper from the tightest of angles on the right of the penalty box, would later be described as one of the greatest goals in the history of the European Championships.

Exactly twenty-six years later Nycke Groot is looking forward to celebrate her birthday on the floor of Laszlo Papp Arena in Hungary’s capital Budapest in pursuit of Europe’s handball crown jewel – the EHF Champions League trophy.  Much has changed since the early days in Alkmaar.

Unlike her football playing countrymen Gullit and van Basten, Nycke Groot picked up the sport of handball and quickly advanced her talent to exceptional levels.  Already in the 2003/2004 season, still at the age of fifteen, she would score the first goal on Europe’s handball stage for her club Zeeman Vastgoed SEW.  In 2008 she decided for a change and moved up north joining the Danish team of TVIS Holstebro.  In the following three years Groot “developed enormously” by her own admission and her name began appearing amongst the top 10 scorers of the world’s strongest handball league.  Not being afraid of a new challenge and responsibility Nycke decided to take the next step and joined local rival FC Midtjylland in the summer of 2011.  At the time, FCM’s sporting director, Frank Henriksen saw a “young winner-type on- and off the field who could play all back-court positions while adding speed to the game.”  As it turned out it was the right step at the right time for both sides – club and player.  Yet another injury of fellow playmaker Laerke Moeller in the current season caused coach Helle Thomsen to award even more playing time to the Dutch all-rounder.  Nycke Groot grabbed the opportunity with both hands and led Midtjylland – the only club from Denmark and northern Europe for that matter – to the inaugural EHF Champions League Final4 tournament in Budapest.  On May 3, in the 2nd semi-final game Nycke and her teammates will meet the defending champions from Gyoer and assume the role of “underdog”.  A part that has served the squad of coach Thomsen well on several occasions before.  Can Groot + Co. surprise all the experts and arrange for the ultimate birthday gift – becoming a Champions League finalist on May 4?

How do the teams line up ahead of what is expected to become the biggest fest for women club handball?

For more than one reason Gyoer Audi ETO appears to be the overwhelming favorite as the team of coach Martin Ambros has all it takes to repeat the Champions League win of 2013.  Katarina Bulatovic, Anita Goerbicz and “Duda” Amorim stand for the most lethal back-court trio of all four finalists.  So far the three prolific shooters have combined for 188 goals in the tournament accounting for 53% of all Gyoer scoring. Already following behind is Nycke Groot with her colleagues Stine and Line Joergensen adding 146 goals (47%) to Midtjylland’s total Champions League tally to date.  Only somewhat dropping off are the two Balkan teams.  Andrea Lekic, Allison Pinneau, and Tatiana Khmyrova contributed 129 points (38%) to Vardar Skopje’s cumulative result while Buducnost’s back players (C. Neagu, M. Knezevic, C. Dalby) added 123 goals (40%) to the club’s overall count.   In particular Milena Knezevic has been struggling throughout the Champions League Main Round.  The frustrations of her lackluster performance and downward trending shooting culminated in a foolish head-butting attack of Anita Goerbicz in the dying moments of Buducnost’s last game at home assuring a two game suspension – including the Champions League semi-final.

The position of pivot is clearly dominated by Heidi Loke (Gyoer) and Dragana Cvijic (Buducnost) with Loke scoring 45 goals in only 10 of 12 possible Champion League games.  Susan Thorsgaard (Midtjylland) and Ana Djokic (Vardar) follow with an output as closely matched as Siamese twins – each achieving 13 goals in Group Play while throwing in 15 points during the Main Round, respectively.

The award for “Best Defense” during the preliminary rounds of the EHF Champions League 2013/14 goes to Buducnost – no question.  Suzana Lazovic & Co. collected only 251 goals in 12 games.  A remarkable accomplishment, given the fact that players from Podgorica were benched for 96 (!) minutes all together while each one of the other semi-finalists spent “only” 66 minutes off the field.  Obviously the “strong” defending efforts of coach Dragan Adzic’s team come at a cost but not a fair price.

The individual performance of the so-called defense specialist on each squad is somewhat of a mirror image of the aforementioned observation.  S. Lazovic; Buducnost spent more than twice as much time on the bench (22 min. – she only played during the Main Round) when compared to Begonia Fernandez; Vardar Skopje (10 min.), Louise Spellerberg; Midtjylland (8 min.) and Raphaelle Tervel; Gyoer (6 min.).

Looking at the most productive wing players three names stick out: Radmila Petrovic (Buducnost), Jovanka Radicevic (Vardar Skopje) and Trine Ostergaard (Midtjylland).  While Petrovic (53 goals) and Radicevic (51 goals) have been the best scorers from the wing, Trine Ostergaard’s 45 points have been most evenly distributed between Group Play (23) and Main Round (22).  Overall Vardar enjoys the most depth and experience on the wing positions considering the far left side of the court being occupied by Siraba Dembele and Maja Zebic.

Then there are the “Black Swans” – in finance the theory of black swan events is a metaphor that describes an occurrence that comes as a surprise, has a major effect, and is often inappropriately rationalized after the fact with the benefit of hindsight.  Players that have the potential to fit in this category are the likes of Julija Nikolic (Vardar), Trine Troelsen, Laerke Moeller or Fie Woller (Midtjylland), Byzdra Kinga (Buducnost), Aniko Kovacsics or Adrienn Orban (Gyoer).  This year all of them have in common that they are not among the “Go-To” players when the game enters crunch time but all of them have the class to step up and decide a match without warning.

Last but not least – how do goalkeepers and coaches stack up?  Katrine Lunde (Gyoer), Clara Woltering (Buducnost), Inna Suslina (Vardar Skopje) and Sabine Englert (Midtjylland) have the talent, practical knowledge and skill set to determine the outcome of a game single handedly on a good day.  Reflecting on the Champions League season to date Clara Woltering may have a slight edge over her colleagues between the goal posts.  The German keeper has been playing some of the best games in her career over the course of the past nine months.  She did not only help Buducnost to keep a clean record at home but her national teammates benefitted from her tremendous goalkeeping skills as well when they advanced all the way to the quarter-finals in World Cup 2013 in Serbia.

Four coaches – two men vs. two women. Martin Ambros, the Spanish defense specialist who finally brought the Champions League trophy to Gyoer in 2013 and Dragan Adzic, “Mr. Montenegro” of women handball; Champions League winner 2012 vs. Indira Kastratovic, the only coach that won the highest prize of the EHF as a player in 2002 and Helle Thomsen (Midtjylland) the only female coach in Denmark’s highest league.  At this point most every handball expert foresees a final match between the teams of the two men but can either female surprise and play the part of creative disruptor?  While Kastratovic can trust a whole host of superior talents and their ingenuity, Helle Thomsen’s success has been relying on perfecting team play and supplying an inventive coaching move when the game is on the line.

No doubt Laszlo Papp Arena will be filled at capacity and a good number of the 12.500 handball fans are expected to create an atmosphere that will make the defending title-holder, Gyoer, feel at home.  On paper the situation appears “cut and dried”.  Gyoer with superstar goalkeeper Kristine Lunde, leading scorer Anita Goerbicz, the explosive back-court players Amorim and Bulatovic and the world’s best line player – Heidi Loke – will all but assure to repeat the triumph of 2013.  But what are the chances that the Hungarian dream will be hitting the “Wall of Buducnost” or destroyed by the startling moves of IHF World Handball Player of the Year, Andrea Lekic?  Handball connoisseurs around the globe are in agreement that there is a distinct possibility that the teams of Adzic or Kastratovic will put up a worthy fight but nobody really believes that Gyoer can be stopped by either one of them.  Not in front of an enthusiastic home crowd that will raise the stadium temperature to the boiling point.  On May 4, 2014, everybody foresees Gyoer entering the final match and absolutely nobody is seriously counting on the team from the heart of Jylland.  Is really anybody expecting much if anything from Line Joergensen & Co. when they make the trip to Budapest?  Herein lies the opportunity for Helle Thomsen and her players.  Looking at things differently – the potential for an upside surprise is open-ended and what could be sweeter than throwing a surprise birthday party?

In 2012, Nycke Groot in an interview with the EHF said “…the thing I like about handball is that nothing is impossible and if all the puzzle pieces fall into place, you can beat any team.” Later in the same conversation she added: “It’s so great to play in the EHF Champions League and I’ll enjoy every second of it. It’s a great experience to play against the best players of the world and I hope one day I’ll be on their level.

“Without deviation progress is not possible.”