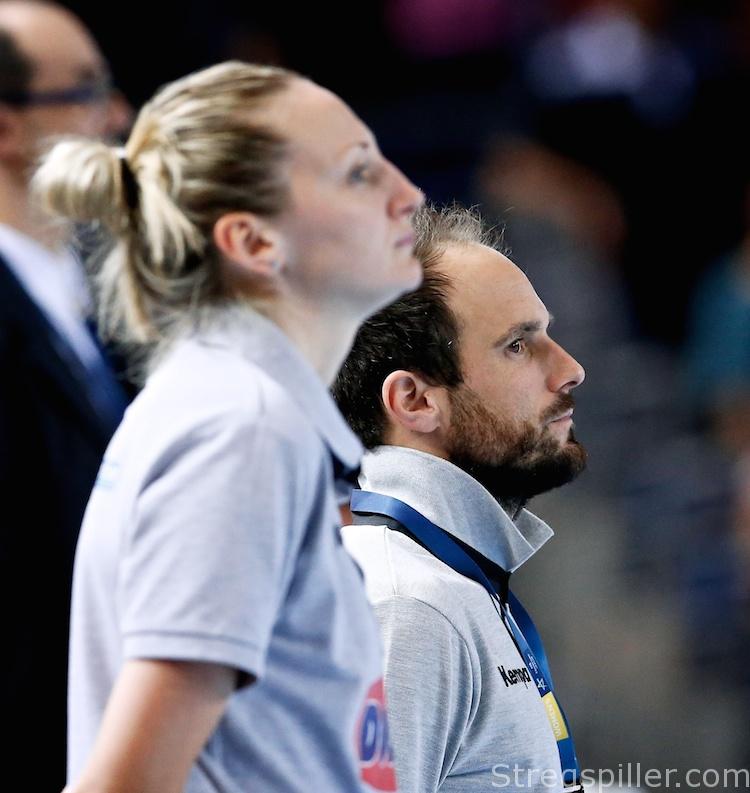 “Maybe I needed to push myself to the limit”

INTERVIEW – It’s been a month since Emmanuel Mayonnade accepted the job as coach of the Dutch women’s national team, following the departure of Helle Thomsen. At age 35 the new engagement will be his first as national team leader, although he gained plenty of experience since October 2015, when he signed with French side, Metz Handball. This season the team already qualified for the EHF Women’s Champions League quarter-finals and there’s a good chance that Glauser & Co. will grab a ticket to the Final4, in Budapest.

Reasons galore to talk to Emmanuel Mayonnade and the challenges ahead.

Let’s talk about your new job as coach of the Dutch national team – did you feel you had to see something else at this point in your career?

EM:  No, not at all – I often mentioned it to my family that coaching a national team was not one of my goals. Maybe I said it because of the path I’ve taken professionally so far, or maybe because of my current motivation. I certainly don’t picture myself to stop coaching a club. That’s where I built my foundation, that’s what I know and it’s what keeps me going. I need to be in touch with a handball team on a daily basis.  Right now, I don’t think I could live without it. I need it – coaching a national team wasn’t a big objective for me. But, as soon as the discussions with the Dutch federation started, leading the Dutch team, turned into a goal on short notice.

How did it all happen?

EM:  I heard that Helle Thomsen was leaving and through my agent, I decided to get in touch with the Dutch federation. It was all straight forward – first I had some phone interviews and then we talked face to face.

When you say that coaching a national team wasn’t a need for you, what’s your motivation?

EM:  I wanted to gain some more experience and see something new without jeopardizing everything that we’ve built in Metz in the past three seasons, as I really feel comfortable here. I wanted to experience something new. I don’t know if I wanted to challenge myself, but having this new job takes me out of my comfort zone. Yet, I have no doubt that I’ll be able to work as well in Metz as I did in previous seasons. I would not risk the job in Metz to coach the Dutch national team. In some way, I’ll be starting from scratch with the national team and I don’t speak the language either. Maybe, I needed to push myself to the limit and face some challenges.

Does it feel exciting?

EM:  There’s quite a paradox here, because everything that’s new tends to scare me.  Still, I think that I need it, right now. I’ll follow in the footsteps of a coach that had some great success and I know that the task maybe even tougher because of it.

Can the nomination be seen as some kind of reward of what you have achieved in your career so far?

EM:  I don’t think so – I did receive some congratulations and I can sense that some people see it this way. But, that’s not my opinion. For me it’s another step forward, nothing more. I don’t see myself as a career builder – I don’t make such plans.  Look – I said “No” to Metz before I joined them because I felt comfortable where I was at the time and I wasn’t aiming for such a big club back then. I already said “No” to another national team because they asked me to stop coaching on the club level. I have no plans, only choices and I am motivated by the state of mind I am in at a certain moment.

EM:  Funny that you say this, I always dreamed about the Dutch national team. Before opting for Metz, I was coaching another club called Mios and back then I was in contact with Laura van der Heijden and Lois Abbingh – I loved this team. I thought that the (Dutch ed.) team had very good momentum and would achieve great results. And now, two months ago I paused and thought: “Damn’, this is really happening.” I used to love this team and now I’ll be coaching it.  I guess the fact that I signed with Metz and that I’ve achieved some good results turned me into a somewhat more interesting candidate as a coach.

You’ll be coaching Metz and the Netherlands at the same time. Did you have to convince anybody?

EM:  The Netherlands wanted me to carry on coaching on the club level, maybe because having someone who’s on the bench in a leading European club can be quite positive.  Certainly, the president of Metz was very open as soon as I told him that I was in contact with the Netherlands. He thought I would do well handling both tasks at the same time  – that was nice of him. I think he knows what I can do and he’s an honest person who will tell me what he thinks. If he thought that this wouldn’t work, he would have told me and he wouldn’t have done everything to keep me.

I assume your days are very busy now?

EM:  Yes, definitely. Usually, I work from 8 am to 6 pm for Metz and then from 6 pm to 8 pm for the Netherlands. The workload for Metz hasn’t changed.  For me it means to watch some games here and there and learn more about some of the players. But, let me be clear, the schedule is not too crazy, so far.

What will it take for the Netherlands to finally win a title?

EM:  A bit of consistency. The semi-final against France at the EHF EURO 2018 was played at a very high level but there were moments when the team took the foot off the pedal they paid a high price. Maybe the girls can’t keep their heads cold enough for the entire 60 minutes?

You were talking about having to start from scratch earlier – does the retirement of Nycke Groot and the injury of Delaila Amega have anything to do with it?

EM:  I’d be lying if I would say that Groot isn’t one of the very best in her position and I’d be lying when I say that we didn’t want to give more responsibilities to Delaila. But, we’ve got to work with what we have – these are the up’s and down’s in a team. Of course, I’m sad for Delaila, as I would have liked to start this cycle with her. Nycke Groot made her choice and we have to respect it.

Could her retirement have changed your decision to coach the Netherlands?

EM:  During the negotiations, I learned that she would stop playing for the national team. To realize that an excellent player is stopping her international career, when you’re on the verge of signing a contract, doesn’t make you jump with excitement – I have to respect her decision. I’m not the one asking her to change her mind.

Do you feel more pressure as Helle Thomsen achieved some great results with the team?

EM:  Some coaches succeed because they follow others, who were less successful. They set things up, they get results and everybody is screaming “genius”. When, I arrived in Metz, the club was successful and at this moment it still is.  The fact that I was able to help the team and to remain on top tells me that I’ve been doing things right. I still have a lot of work to do, but don’t fool yourself, the pressure in Metz is huge – everybody expects us to win. It will be a similar kind of pressure with the Netherlands.  I remember winning games in the Champions League under difficult circumstances, against Buducnost without Xenia Smits or against Vardar without Beatrice (Edwige ed.). And, this situation will be very much the same in the Netherlands – people will expect us to win even without Nycke or Delaila.

You’re coaching Metz – a very successful team – and the Netherlands – one of the best national teams in the world. Does it feel like all stars are in alignment?

EM:  It’s more complex. In Metz, we operate in a very modern club, including quality players and all I have to do is to create a sense of purpose among all the players. And, “yes” it’s working well. But, I repeat every single day that we can’t take anything for granted and that finding the right balance is a delicate task. We’re not immune to a serious injury or a problem inside the locker room. As of today, we haven’t reached the goal for Metz yet, which is the Champions League Final4. I’m enjoying the moment and the results we’re getting with the team. But, you have to realize that there is a lot, and I mean a lot of work behind this including me, the staff, the players, the whole club.

In the Netherlands, Ekaterina Andryushina will be your assistant coach, as she is in Metz. What’s the idea behind this choice?

EM:  To say that it was just a way of winning time would be an insult to her. We know how to work with each other, and we know what the other thinks. She adds quality and we share a common philosophy how to play handball . It’s difficult to find an assistant coach that you work well with, and the same holds true for rest of the staff. Fortunately, I’ve this kind of relationship with Katya. And, I’m sure that we will benefit from the international experience and make the most of it, even though she’s already won everything there is to win on this planet.