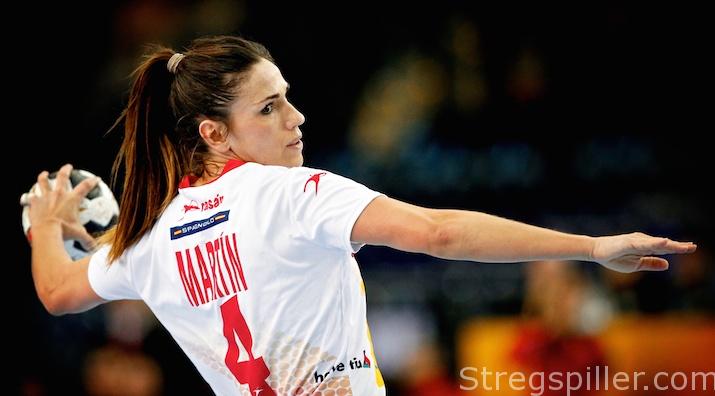 Carmen Martin has seen a lot in handball, as have many of her Spanish teammates.  Still, the veteran right-wing felt like her team melted under the pressure of playing a game in the knock-out stage at the World Cup.  Everything appeared to go right during the group phase, where it became obvious that the team would move on to the Round of Last 16. After the loss to handball superpower, Norway,  I talked to her about the match the tournament, in general.

In the end, it was quite a devastating loss – especially in the middle of the second half, I thought you were getting quite close?

CM: Yes, me too – I thought that we were very close, but in the end we were never really close.  All our energy ran out and we were not able to keep the same level of intensity or anything else that you need for a win against Norway.  Norway is almost unbeatable, they don’t make many mistakes, so it was just not possible for us to defeat them today.

Were you too slow or were they too fast?

CM: No, I don’t think they were too fast.  I have seen Norway play faster than this but I believe we were just not fast enough.

Actually, you missed some very good scoring opportunities, midway through the second period.  For example, Alexandrina Barbosa had two wide open shots and they were saved. Do you believe that Norway was the better team?

CM: I don’t think it’s about that, it’s more about Katrine Lunde – I think that she has been in great shape since she came back to the national team. She has put on an incredible performance today, just incredible.

What is your conclusion?  You had a decent group stage, but now you lost against the top favorite to win it all. How would you rate your tournament overall?

CM: I think it was great, because we didn’t think at all not making the knock-out stage. We knew from the beginning that we were going to pass the group phase. But, we didn’t know if we were going through as the fourth or third. But we knew that we were going to make it. So, when the team was relaxed, we played quite well and did a good job especially in defense. But today it was another match – it was a final and I think we couldn’t win because we didn’t know how to handle the pressure. Generally speaking we go home with a good feeling.