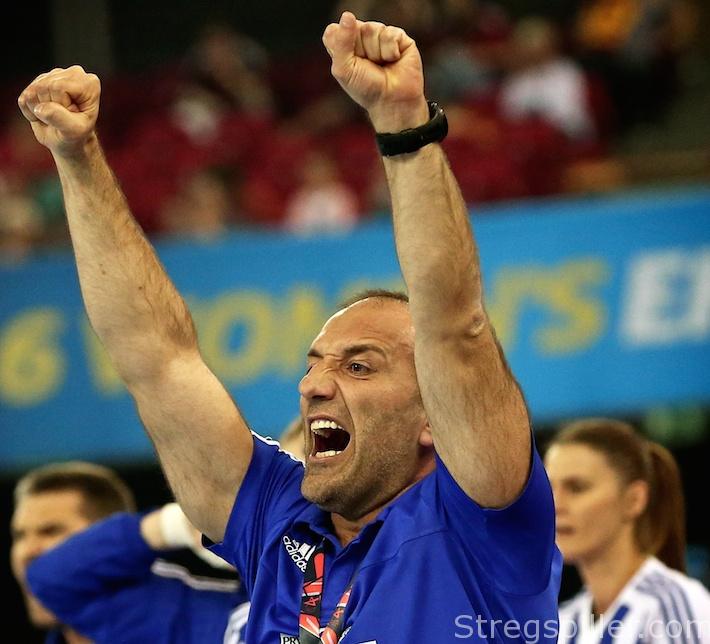 Metz were leading 15:7 in Norway against Glassverket, fell behind 15:17 – and won 24:22 in the end.  It was not nearly as dramatic in Germany, where Buducnost recorded their third straight victory, this time 32:26 on the road against Thuringer HC.

Both of those matches were played in Group A.  In Group D, Larvik booked their first points, while handing Team Esbjerg their first loss of the season – 31:24.

Still missing Dragana Cvijic did not bother Buducnost who had no trouble taking their third straight win – much to the pleasure of the enthusiastic Montenegrin fans that had made the trip to Wiedigsburghalle in Nordhausen.

Buducnost took a clear lead from the start, and quickly went up by 10 goals (17:7).  THC coach Herbert Müller began the game with an aggressive defense, before moving back to a 6-0 formation.  He tried playing seven-against-six in the attack and he called two timeouts in the first half already.

None of it really helped.  Buducnost kept dominating the affair.

The handball powerhouse from Montenegro did not spend much time in the locker room at half time either – why should they?   There wasn’t much to talk about.

In the second half, Dragan Adzic made use his bench, while Jana Krause, in goal of THC, improved and coach Müller stuck to playing seven-against-six.

Still, Buducnost were not seriously challenged and stayed ahead by a margin of eight to 10 goals.  Towards the end of the match the home team managed to reduce the gap a bit.  After three games Buducnost sits on maximum points (6), while THC stay on two.

What an extraordinary handball match in Drammen.

In the beginning both teams were following each other closely (4:4), but then Metz appeared to be cruising towards an easy victory, when they got up 15:7 shortly before the break.

But who would have anticipated that the French women would not score another goal for the next 16 minutes?  Yet, this was exactly what happened.  Glassverket won this period 10:0 and took the lead (17:15).

Not until minute 45 into the second half did Metz manage to score again, when Xenia Smits reduced to 17:16 on a penalty shot.

Glassverket got up by two again at 18:16 and were leading by one at 19:18, 20:19 and 21:20, before Metz decided the match in their favor.  Glassverket ended the game with one player less on the court after a very courageous fight.

Metz doubled their points, while Glassverket are still looking for their first success in the tournament.

Larvik had taken the ferry to Denmark on Friday already to prevent seasickness from having any potential influence on their performance. It did happen on previous occasions when visiting Denmark.

Today, Larvik’s players did not appear to be seasick when they took to the floor at Blue Water Dokken in Esbjerg.

Instead, they surprised their opponents, playing seven-against-six from the start – a tactical move from head coach Tor Odvar Moen – something his colleague on Esbjerg’s bench, Lars Frederiksen, had not anticipated.

Still, Esbjerg managed to keep up with Larvik throughout the first half, even though the visitors had the momentum most of the time.

In the second half, however, Frederiksen and his players could not find the recipe to stop the Norwegian record champion.  Larvik abandoned playing seven-against-six, beating Esbjerg fair and square, backed by a brilliant performance of their Danish goalkeepers.  On a day when Esbjerg’s – usually strong – backcourt was struggling, the outcome of the match was only logical.

Larvik´s first win of the season opens up Group D where anything is possible.