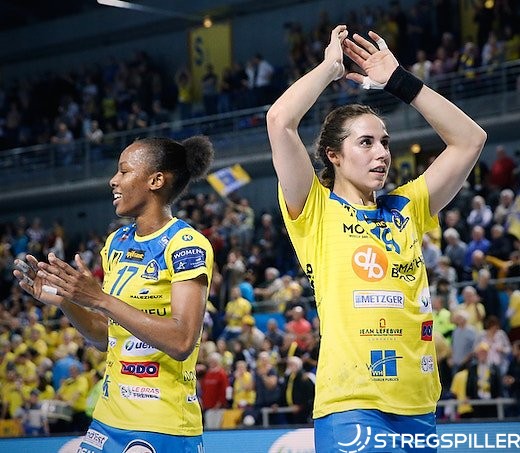 Team Esbjerg were aiming to bounce back from the loss at home against Rostov-Don a week earlier, still without Estavana Polman and Line Jorgensen in the back court.

The 28:25 win snapped Metz’s losing streak on the road as Astride N’Gouan & Co. kept their composure throughout the match except for a cold spell towards the end of the first half, when the host went on a 9:1 run, taking a four-goal lead into the half.

450 spectators at Esbjerg’s Blue Water Dokken arena witnessed a quick start of both teams and coach Jensen’s squad was able to maintain a narrow lead for the first ten minutes before Metz got a firmer grip on the match converting the deficit into a four-goal advantage.

Here the good news ended for the French record champion – at least for the first half of the game.  Led by right-back, Mette Tranborg and Nerea Pena, Esbjerg went on a 9:1 run, the momentum of the match had changed, but nor for good as it turned out.

A very determined Meline Nocandy and the efficient performance of  Jurswailly Luciano on right wing were instrumental as Metz turned the match in their favor.  Midway through the half the French squad had taken a two-goal lead (23:21; 45th minute), which they would not surrender any more.

On the other side, Esbjerg’s line players missed several wide open shots from the line, making it easy for Metz on the road to victory.

Simply put – Metz was the team whose performance was more stable on this Sunday afternoon, especially in the second half of the match.

Add to it splendid performances of Burgaard, Bont and Luciano on the right side of the pitch – the three of them combined for 12 of the 28 goals Metz scored – and the story of the game is told.

Esbjerg were unable to maintain the momentum of the first half and consequently were outscored 16:9 between minutes 31-60.

Instead of the usual one player there a several names on the Metz team that come to mind and deserve mentioning.

First the agile performance of Louise Burgaard on the right back position throughout the match, secondly Meline Nocandy who took matters in her own hands early in the second half, closely followed by Jurswailly Luciano, on right wing.

The 2020/21 DELO EHF Champions League season will head for a winter break with the regular match schedule to continue in January of next year.