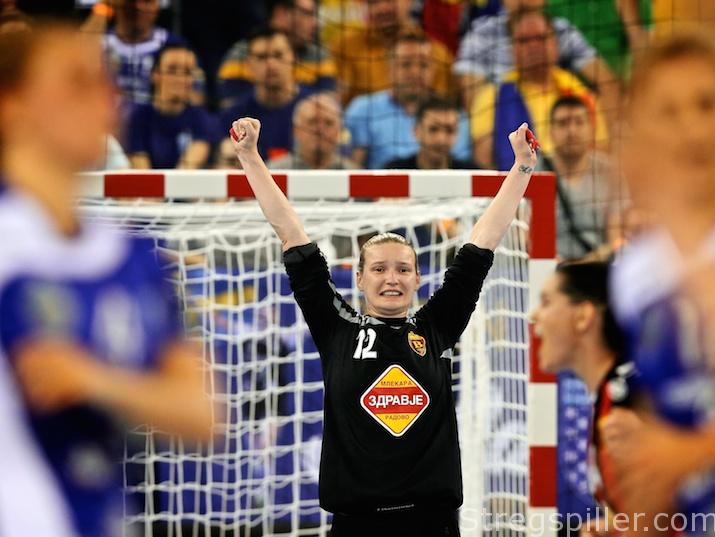 “Midtjylland always cause us trouble”

INTERVIEW – Vardar Skopje’s goalkeeper, Amandine Leynaud, does not feel sure about reaching the FINAL4 at all, despite her team´s one-goal lead before the second leg game, at home, against FC Midtjylland in the quarterfinals of the 2017/18 Champions League.

In this exclusive interview with stregspiller.com, she reveals that she was close to going back to France for the 2018/19 season before deciding in favor of Györ.

HC Vardar are looking forward to a fifth appearance in the FINAL4 of the Women´s Champions League in as many  years.  For the second year in succession, Danish FC Midtjylland is the team that the Macedonian title contender will have to eliminate en route to Budapest.

In the first leg in Ikast this past Friday, Vardar managed to turn a four-goal deficit into a one-goal victory, as keeper Amandine Leynaud closed her goal for close to 17 minutes in the second half, making way for Vardar´s 24:23 win.

“I realized that I had to step it up – we all had to – after our poor start, when we trailed by four goals.

“I simply knew that I had to be at my best, if we were going to turn this match around – so that’s what I tried to do.

“A one goal lead is not much to take with us from the first game, but it could have been much worse.  We have to be satisfied – I guess,” Amandine Leynaud tells stregspiller.com.

“We knew beforehand that we were in for a tough challenge, as we all remembered only too well, how much trouble Midtjylland caused us in the quarter-finals last year.  They always seem to cause problems!

“Last year, we only went “through” after two narrow wins (28:26 in Ikast and 26:24 in Skopje, ed.) and even in our home game, we were close to exiting the tournament.  So, I expect another difficult match on Saturday.

“Midtjylland will definitely not give up and I expect a hard fight to get to the FINAL4.

“After all, the score will be 0:0 when we start the second match and that is what I am going to focus on.

“Usually, the crowd at “Jan Sandanski” arena should translate into a big advantage, but I am afraid that there will be a somewhat strange atmosphere this time, because everyone knows that Vardar will stop playing top handball after this season and that all the players will be leaving.

“However, I hope that the crowd will give us the support we’ll need to make it to the final round.

“Reaching the FINAL4 and maybe winning the Champions League would be the best possible way to end this era here in Vardar,” finds the 31-year-old French international.

Just like all the other Vardar stars, Leynaud will be moving on after this season, as the Macedonian club will follow a different concept excluding top players.

After a five year stay in the Macedonian capital, the French World champion will be joining another European top team – Györ – the 2017 Champions League winner.

However, Leynaud was close to moving in a completely different direction.  These days, many of the French internationals are returning home, to play in the French league, and she was close to joining them.

“Actually, I had offers from French clubs,” she says without revealing any club names but when I received the offer from Györ, I was in no doubt.

“I am really looking forward to playing in a team that’s also looking to win the Champions League every year, just like Vardar.

“I have competed against all the players from Györ many times and it will be really great to be playing with them instead,” says Amandine Leynaud who will be forming a goalkeeping duo with Norwegian international, Kari Aalvik Grimsbø.

One might expect some sort of rivalry between the two accomplished goalkeepers, but Leynaud does not see it this way.

“To the contrary, I am looking forward to working with her and to contribute with my experience.

“I have played against her so many times, and I know her not only as an outstanding goalkeeper but also as a great individual.

“A team like Györ needs two strong goalkeepers, and I am sure Kari and I will complement each other very well,” says Amandine Leynaud.

Amandine Leynaud did not go home to France this time, but could she see herself back in the French league, after leaving Metz Handball for Romanian Oltchim Valcea in 2012?

“I wouldn’t rule out anything.

“For now, I have signed a one-year contract with Györ including the option of another year. Thereafter, we must see what happens.

“However, these days the French league is getting more and more attractive with many of the top players joining – maybe I will end my career in a French club, who knows?

“Anyway, I am looking forward to going back to France for the European championship at the end of this year.

“Playing EURO 2018 on home ground as the ruling World Champion will be just awesome but I will not allow myself to get carried away with this thought, right now.

“There are many important events in between and first and foremost it’s all about qualifying for the Champions League FINAL4.  As I said, it will be hard enough against Midtjylland, a team that always seem to cause us trouble.