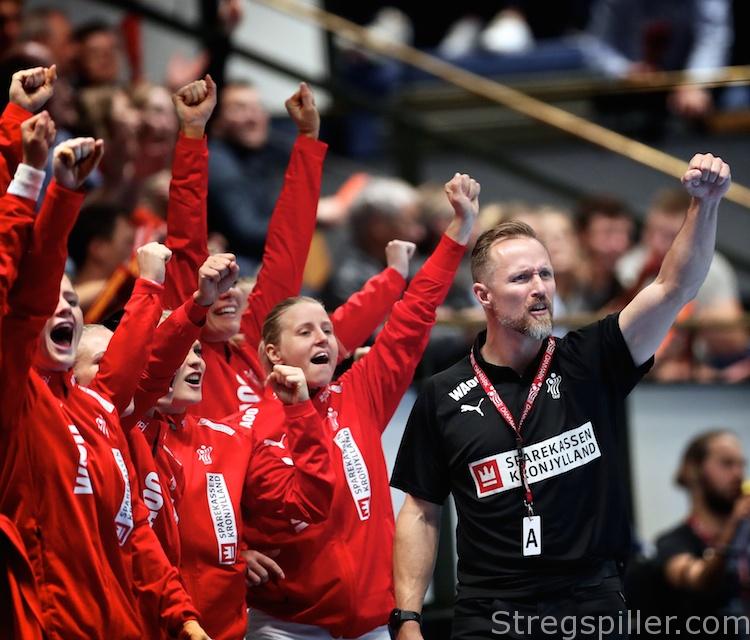 “Missing a player like Jørgensen forces us to adjust our objectives”

INTERVIEW – Denmark´s most important player, Stine Jørgensen, may be fit for at least part of the European championship- a miracle?!

The situation presents national team coach, Klavs Bruun Jørgensen, with two scenarios – one including Stine Jørgensen and one without her.

“Aiming for a semi-final without Stine Jørgensen would be an unrealistic goal and would put too much pressure on us against some very strong opponents in our bracket,” he says

What appeared to be a completely unrealistic scenario just a few days ago, all of a sudden turned into a possibility.

Denmark´s key player, Stine Jørgensen may be fit for the European championship – or at least part of it.  The Danish team captain is recovering from her knee surgery faster than initially thought and has been invited to the squad´s training camp ahead of the tournament.

“In close cooperation with Stine´s club, Odense HC, we’ve found it a realistic scenario for her to be fit to play during the European championship,” says Denmark´s national coach, Klavs Bruun Jørgensen.

Denmark’s women missing Jørgensen is about as bad as if Mikkel Hansen was missing from the men’s squad. Now, Klavs Bruun Jørgensen has to work with two options – one involving Stine Jørgensen to some extend and one without her.  Of course, the big question is how much she can contribute in any event?

Usually, Denmark – men and women alike – has a semi-final appearance as a main objective before any major championship.

This time, however, Klavs Bruun Jørgensen is more cautious when talking about his expectations.

“Targeting a semi-final without Stine Jørgensen would be unrealistic and foolish and would put undue pressure on us as we face some very strong opponents in our bracket of the tournament.

“Missing a player like her – even for parts of the competition – forces us to adjust our objectives.

“I would like to break things up a bit.  Our first success criteria will be to emerge from the preliminary round and then we’ll be facing a very tough main round group with France, Russia and Montenegro,” Klavs Bruun Jørgensen explains to stregspiller.com.

Of course, he has some ideas how to fill the gap if Stine Jørgensen can’t play at all, but he also realizes that she will be extremely difficult to replace.

“If she is not fit, she will leave a big hole in the attack, where she is covering as playmaker as well as left back, but we will also miss her in defense, where she is used to cover the left back position very well,” he says.

Several players to step up

To compensate for the possible absence of the star from Odense, he plans to rotate a few of his remaining right-handed back court players.

“Nadja Offendal and Lotte Grigel will probably act as playmakers all the time, while Anne Mette Hansen is likely to stick to her left back position.

“And, in all likelihood, Mie Højlund and Kristina Jørgensen will be playing in the center as well as left backs,” he expects.

For his team, EURO 2018 will begin in Nantes, where they will meet Sweden, Poland and Serbia, in Group A.

Should the Danes make the cut and move on to the main round, they’ll be able to stay in Nantes and welcome opponents like the reigning World champion from France, the Olympic champion from Russia as well as Montenegro. No one really expects the fourth team in Group B – Slovenia – to play a role beyond the opening round of the tournament.

Denmark´s opening match against Sweden will be an opportunity to avenge the quarter-final loss at the 2017 World Championship, in Germany, when the Scandinavian neighbor succeeded, courtesy of an exceptional performance of right back, Hanna Blomstrand.

“We are aware of her, of course, but she is not the only problem.  Sweden is a very solid team and they played a very close semi-final against France at the World Championship, last year.  Actually, we were not far from reaching the final round either.

“I expect it to be a close game, but so will be all the matches in this group.

“We lost against Poland at the Golden League, at home, earlier in the fall, but I am sure we have learned from the defeat.

“Actually, Serbia may be one of the most unpredictable teams.

“Looking at the players they have, I would say they have one of the most exciting squads in the tournament – the big question is if they can work as a team.  In addition, they still depend a lot on Andrea Lekic playing well,” sounds Klavs Bruun Jørgensen analysis of Denmark´s group.

For Denmark to have a chance reaching the semi-final – a stage they do not dare to talk about at this point in time – Jørgensen’s crew must collect four “big” points during the preliminary group, points that will carry through to the main round

“Considering how strong a potential main round group will look like, this (four points ed.) will be necessary.

“At the most recent European championship, in Sweden in 2016, we saw how essential our four points were. We would have never reached the semi-final, without them.  Not in a main round group that included Norway, Russia and Romania.

“If you only get two points, not to speak of none at all, things become very difficult in the main round – to say the least,” finds the Danish coach who remains optimistic after all.

“All our opponents in the preliminary group as well as the possible contenders in the main round have in common that we have defeated all of them before.  But, we also lost against them,” asserts Klavs Bruun Jørgensen.