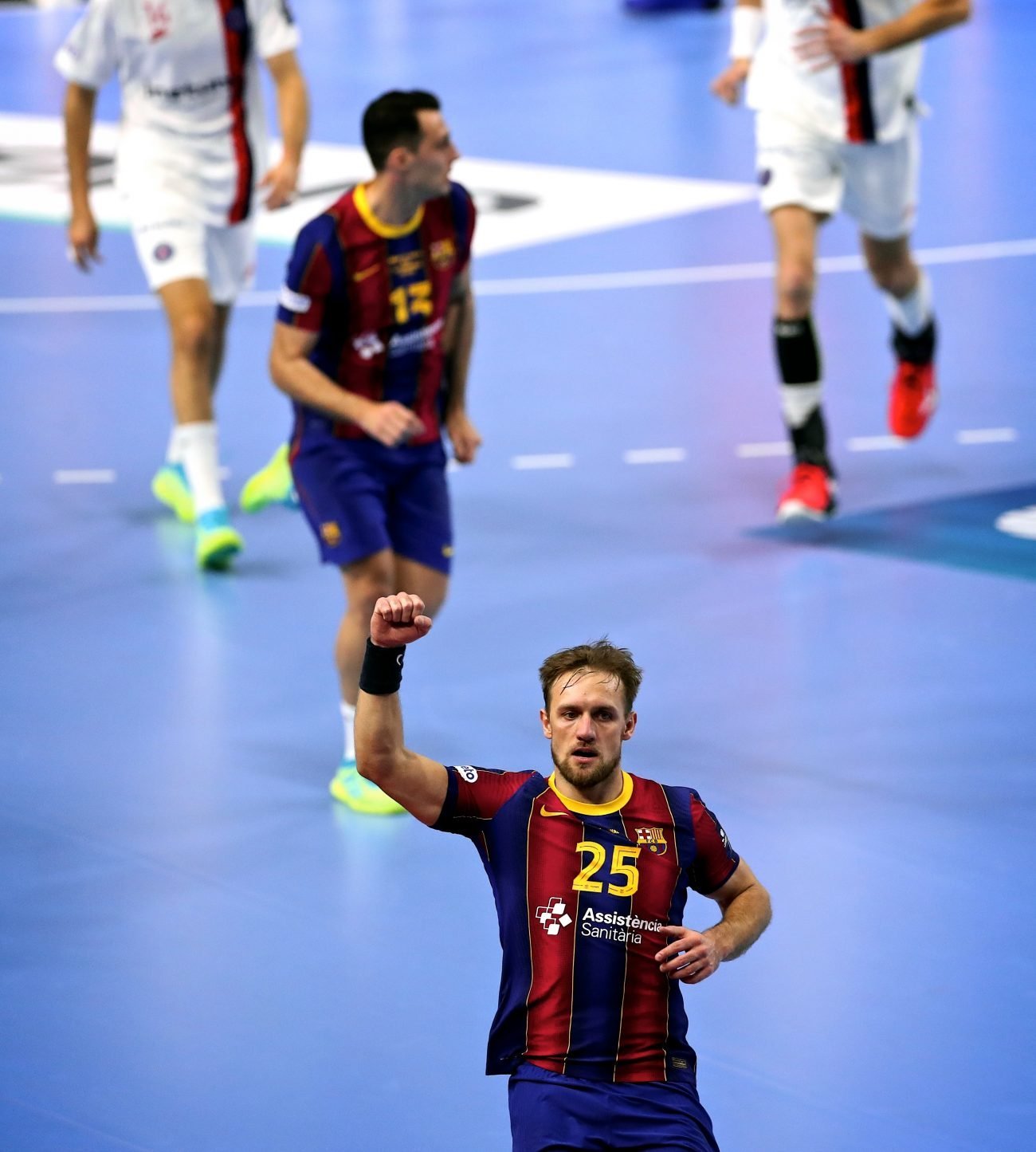 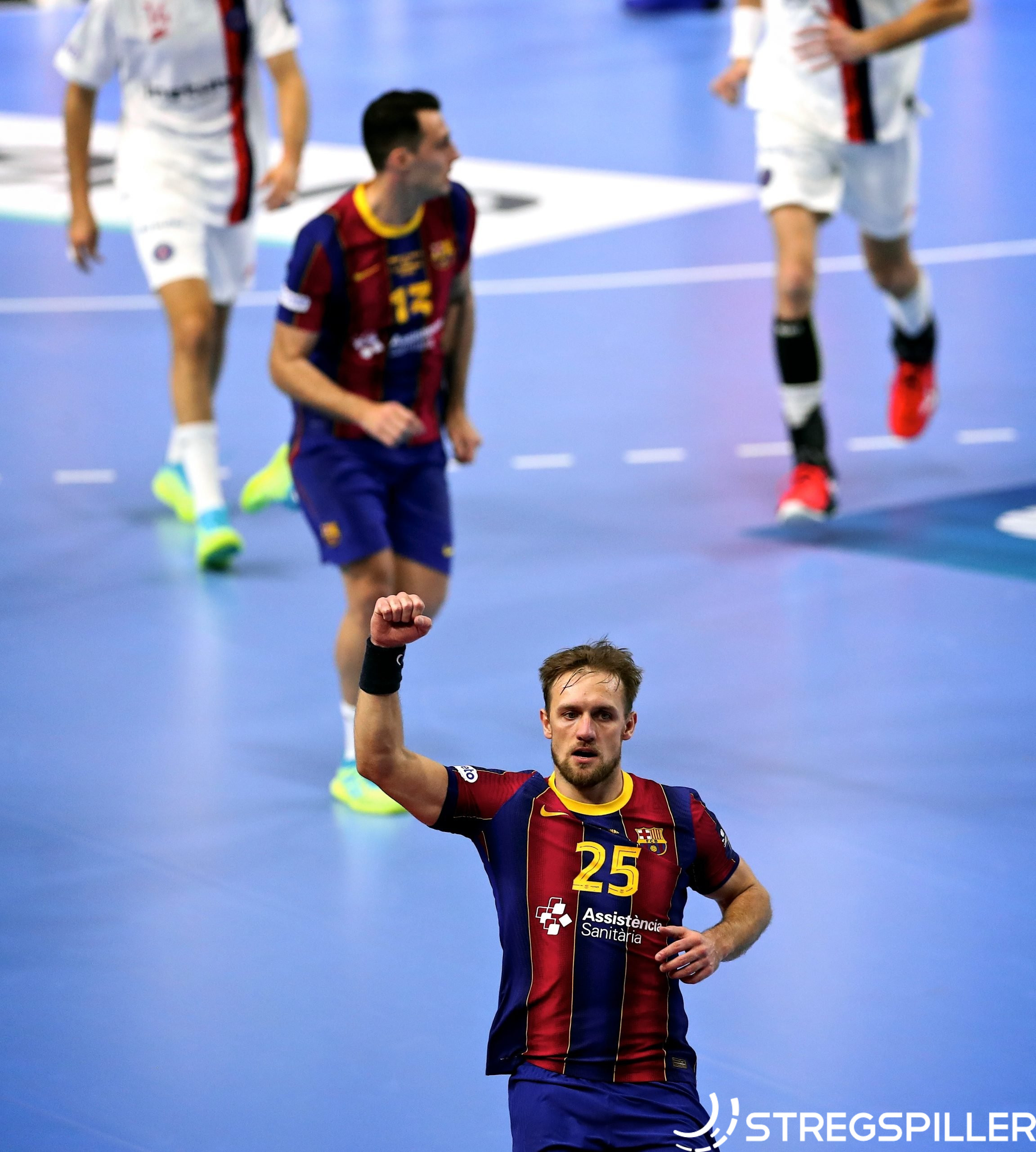 Møller mauls PSG’s attack to send Barça into the final

Barça came into this game on the back of a 21-game winning streak in European competition, a run which included two high scoring victories over PSG just over a year ago. Injury doubt Aron Palmarsson was passed fit to play for a team which was out to prove they had learned their lessons from 2019.

PSG came into this event in the rare position of underdogs, due largely to their inconsistent form this season and the absence of Nikola Karabatic through injury. Karabatic’s absence was compounded by the late positive COVID tests for his replacement in attack, Luc Steins, and Henrik Toft Hansen, leaving the French champions with just 14 players in the matchday squad, an unusual occurrence at the EHF FINAL4.

Preventing the opposition from implementing their ‘Plan A’ in attack was a focus for both sides early on. For PSG, transition defence was the key, heading for home as quickly as possible to stunt Barcelona’s counter-attacking prowess.

As for Barcelona, their intelligent and dynamic defence was focused on reducing the time and space PSG’s back court crave to create shooting opportunities for themselves and to find the line player.

A 37:32 victory for Barça was exactly what they deserved. Having soaked up the early pressure, they took control of the contest and unlike some very memorable semi-finals in the recent and not so recent past, they kept their cool in the second half to book a place in their first final since 2015.

PSG came out strong, as we knew they would have to, pushing the pace at both ends of the court and taking their chances well to open an early 7:4 lead. But how long could they keep up that pace?

Xavi Pascual did not panic, he merely used his bench, bringing on some players who would help turn the game on its head.

A mind-blowing series of saves from Kevin Møller stopped PSG in their tracks, while the right side of the Catalan side’s attack helped transform a three-goal deficit to a momentary five-goal lead, eventually going into the dressing rooms with an 18:14 lead.

A bead or two of sweat may have formed on the Barcelona bench when Vincent Gerard saved two penalties in quick succession but Aron Palmarsson soon got his side flowing again with two goals and two assists in two minutes.

But Paris just kept clinging on. With the play becoming a bit disjointed, they were allowed back into the game but some simple errors prevented them from cutting the gap below three goals.

Then, out of nowhere, Timothey N’Guesson scored three goals on the trot to help his side settle back into their rhythm, while Barça’s defence began to impose their dominance.

A Blaz Janc steal from Hansen and open goal on the 50-minute mark made it a six-goal game and the win was all but secured.

A no-nonsense and ultimately brilliant decision to bring Kevin Møller in between the Barça posts early in the first half, when it simply wasn’t working out for Perez de Vargas.

The big Dane has been enjoying a phenomenal season so far and his rise continued today as he completely flattened PSG with his saves – stopping five from the first eight shots he faced.

He ended the first half with eight saves from 12 (66%) and finished the game with 14, not including all the saves that did not officially count due to fouls being called after the shot. Most importantly, nine of his stops came from shots at 6 metres, a huge performance which lay the foundation for his side’s victory.