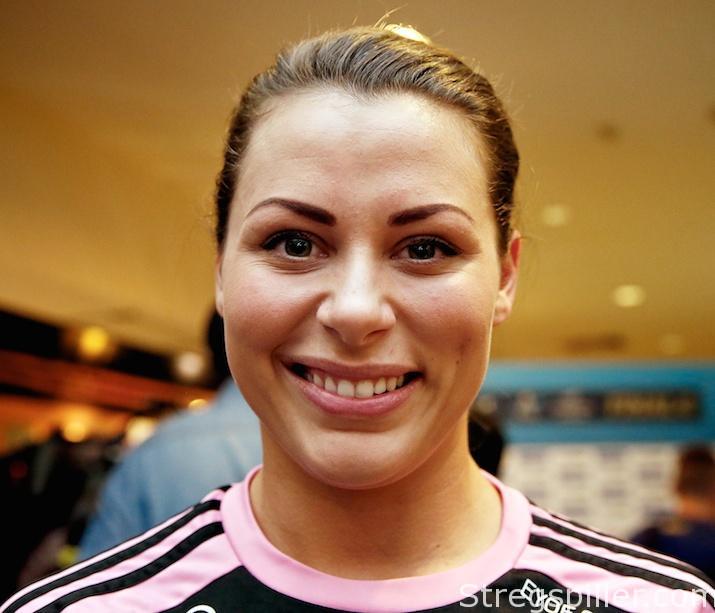 Now, as her first season with her new team is slowly coming to an end, she finds that changing has been easier than expected.

“It has not been nearly as difficult to adapt to another handball philosophy or another culture and mentality as I would have thought in advance.

“I got plenty of help from the club, and my integration into the squad may have been easier as I was the only new player in the team at the beginning of this season.

“I was signed as a goal- scorer, and that is my focus” says Mørk who has been pretty successful in this regard, during her first season with the Hungarian top club. 78 goals from her left hand in the Champions League only add to the story.

“What has made things a bit more complicated, is the fact that we have lost Heidi Løke to pregnancy.

“She is severely missed on the line as well as in defense, but we have managed anyway,” says the 26-year-old Norwegian international who has won the Champions League with Larvik in 2011, once already.

However, that was before the time of the FINAL4 format in women´s handball was introduced.  In 2015, she and Larvik lost the final against Buducnost 26:22.

Buducnost is also the opponent, who will await her and her teammates in the semi-final on Saturday.

“Of course, I want to avenge that defeat, and I also expect us to do it when we meet them in the semi-final,” says Mørk who already considers this FINAL4 bigger than the one two years ago.

“To play a FINAL4 in Budapest for a Hungarian team is really something special to me, and I am really looking forward to playing on home ground in front of 12,000 spectators in a sold-out arena,” says the hard-shooting right-back.

Hoping for Vardar in the final

She has a particular wish if she and her teammates from Gyor reach the Champions League final Sunday.

“If we make it to the final, I would like to meet Vardar – simply because we have not met them yet this season.

“We met CSM in the group phase already, and tomorrow, we are going to battle Buducnost, meeting a new opponent would be refreshing.

“However, I am not even sure things will turn out that way.

“Actually, I see the other semi-final, between Vardar and Bucharest, as being very evenly matched, and it is hard to predict the winner of that one.

“First of all, however, it is all about winning our own semi-final against Buducnost, and that may be difficult enough,” says Nora Mørk.